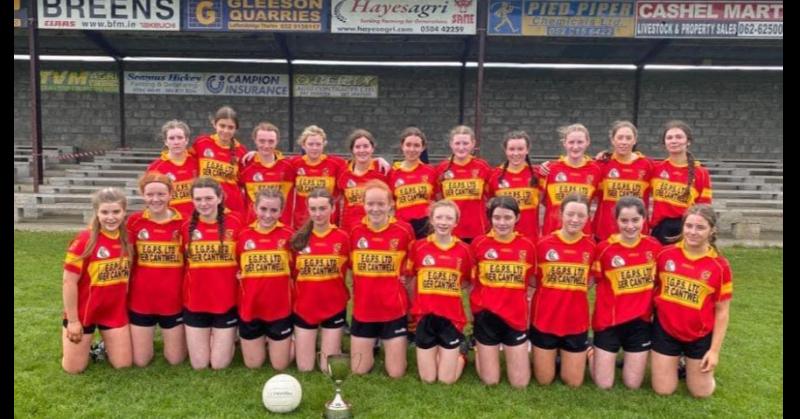 U16 A Football Final

This was the last final to be played in Boherlahan on Sunday and what a final it proved to be.
Both defences were on top throughout the game and only that Moycarkey Borris had players of the class of Ciara Shelly scoring 2-7 and Aoife Shelly scoring 2-0 which added to a wonderful game.

Half time Moycarkey 2-7 Fethard 1-4. The second half saw Fethard take over and bring the game down to just two points. Moycarkey recovered well and with Sarah Corcoran, Sofie Coughlan, Janis Corcoran and goalkeeper Niamh O'Gorman who made a number of great saves to help Moycarkey Borris to retain their Country title.

Fethard can be very proud of the way they played with outstanding performances from Meabh Cuddihy 2-6, Abbie Brown 0-1, Emily Davey0-1, Emily Spillane 0-1 and Aine Lawrence 0-1.

A special mention to Pat Morrissey Fethard Electrical Wholesale for his sponsorship of the Under 16 Championship from A To D and also his sponsorship of Player of the Match in each final.
To Galtee Rovers and Boherlahan Dualla for making their grounds available for the finals. The refreees David Grogan A final, Paul Carew B Final, Billy Cummins C Final, and Caoimhe Ryan D Final.

U16 B Football Final

What a wonderful game we had in Bansha on Saturday when these two sides met to decide who would become County Champions.

Holycross/ Ballycahill are starting to make their presence felt in Tipperary LGFA adding this U16 title to the U21 league already won this year. Grace Fitzpatrick Ryan was their leading scorer with 5-2 and Sarah Quinlan 1-5.