The flag raising ceremony took place virtually on May 25 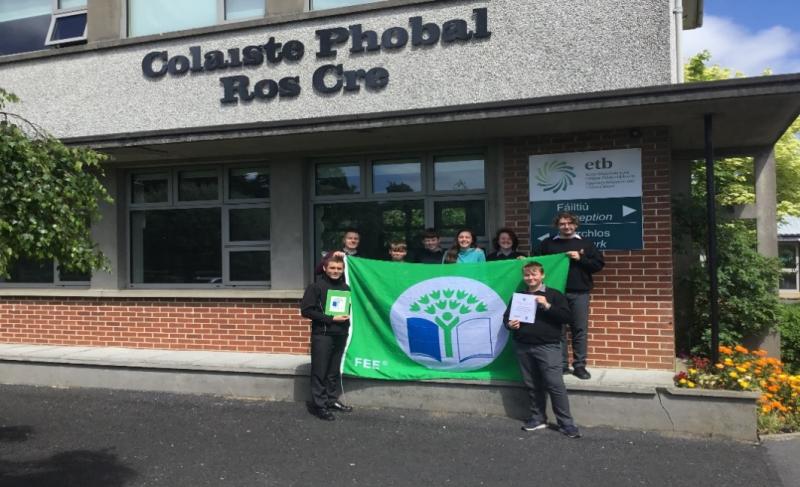 Coláiste Phobal Ros Cré is among the recipients of this year’s national green flag awards. The flag raising ceremony took place virtually on May 25, 2022.

The school was awarded its fifth flag on the theme of Biodiversity.

On March 31st Catherine Broderick from Tipperary County Council met the Green Schools committee and inspected the work carried out since 2019. The committee were delighted when the news came through of their success a few weeks later.

A lot of work has gone into improving awareness levels of biodiversity within the school and enhancing the surrounding natural environment for biodiversity to evolve and thrive. Some physical improvements to the school grounds included native tree planting, planting of pollinator friendly flowers, nest boxes, signage, bird feeders etc.

Annual whole school initiatives such as Climate Action Week and National Biodiversity Week helped with improving awareness levels across the school year groups on the theme of biodiversity and broader environmental education.

On May 5th, 51 students from both the Green Schools committee and the Transition Year Environmental and Social Studies classes visited Lough Boora Discovery Park to learn of their work in turning a once working bog into a spectacular haven for animals, birds and plants.

The committee is very thankful for all the support they received from students and staff in completing surveys, helping out with tree planting and also acknowledges the past pupils and committee members who played a key role in achieving the biodiversity flag.

Thanks to Ms Mullen, Ms Dore and Mr Smyth for their help this year. After a well-deserved summer break the new focus will be starting the ground work on the 6th flag: Global Citizenship – Litter & Waste.