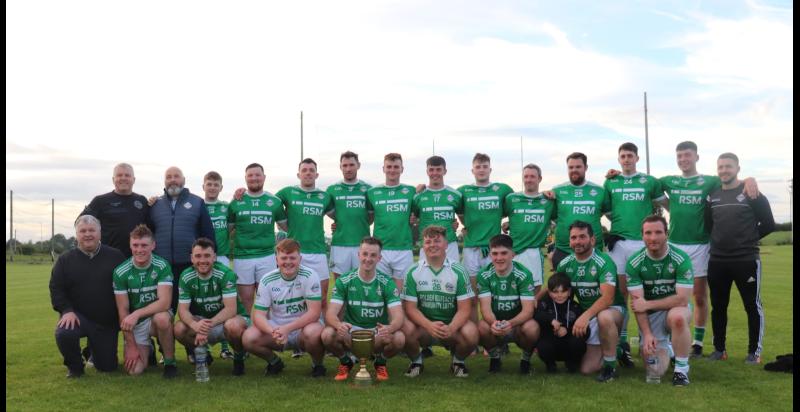 Carrick team will meet Mullinahone in this weekend's final

Golden/Kilfeacle are Shane Hennessy Agri Advisor West Intermediate Football champions for the sixth time, following their seven-point victory over holders Galtee Rovers at New Inn on Saturday evening. They were seeking their first title since 2019 and started this game full of confidence, racing into a three-point advantage by the fifth minute.

They were only headed by the Bansha men briefly before the half time break following an Eamon Quirke goal and a Darren McGrath point. However, a Seanie O’Halloran converted penalty five minutes into injury time, had them ahead by the minimum at the break.

A Niall Fogarty goal after a minute of the second half gave them the momentum to drive on. This was followed up with a Shane O’Connell third goal after eight minutes to give them a cushion that they would hold until the final whistle.

With eight minutes remaining, Darren McGrath pulled a goal back for Galtee when he capitalised on indecision in the Golden defence. However Golden regrouped and scored the last three scores of the game to run out worthy winners on the score 3.13 to 2.9.

Galtee Rovers finished the game with thirteen players, Sean Gubbins was red carded just before the break for a tackle on Keith Landy, which resulted in the penalty being awarded, while Daire Egan was black carded in injury time, just before the final whistle.

Galtee also lost David Harold Barry, through injury, thirteen minutes into the game and was replaced by Darren McGrath. They also lost Stephen O’Dwyer after twenty-seven minutes, also to a foot injury and he was replaced by Eamon O’Connell. The loss of these influential players had a big bearing on their second half performance.

Golden hit the ground running, in what was a repeat of last year’s final, and three points inside the opening five minutes, from Keith Landy, Sean Hayes and a converted free from captain, Seanie O’Halloran, set the trend. Galtee were struggling to get into the game, but Eamon Quirke opened their account after nine minutes. A good run from Jack Leamy ended with a score at the far end to restore their three-point lead.

Galtee came more into the game and two points from Jim Quirke, either side of a Ben Currivan score for Golden put two points between the sides. With one minute of normal time remaining, Eamon Quirke was first to a breaking ball to crash home the opening goal at the village end. This score gave the Bansha men a one-point lead as the game headed into injury time. Darren McGrath doubled their advantage before Seanie O’Halloran converted a penalty, with the last play of the opening period. Half time score, Golden 1.6, Galtee Rvs 1.5.

Golden introduced Niall Fogarty to the attack at the break and with his first touch finished to the net, ending a move down the right involving Ben Currivan and Jack Leamy. John Colohan followed up with a well taken point to give Golden a five-point cushion. Darren McGrath converted a free after five minutes, but Shane O’Connell goaled three minutes later, following a piercing run by Jack Leamy.

That goal effectively killed the game as a contest, but Galtee battled on. They were rewarded for their persistence with a goal from Darren McGrath, when Golden were caught napping, in their

Golden were good value for this victory and will go into the Co. championship full of confidence. These two sides will meet at least once more this season, as they are drawn together in Group 1 of the Co. series.