Win and Debut for Paddy and Martin in Clerihan 8k 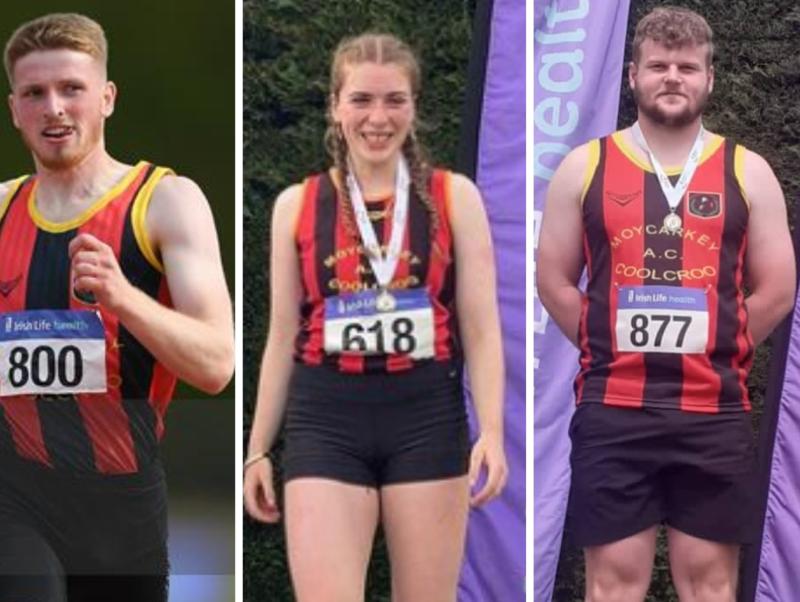 Gold for Anna, David and Sean at National U23s
The All Ireland U23s Track & Field Championships took place in Tullamore Stadium in Co.Offaly on Sunday July 17th. It was a fantastic day for the club with 5 individual title wins. On the Track David Ryan was up in the MensU23 400m first he had to qualify for the final which he did duly winning his heat in 51.25seconds. He then upped another gear and won the 400m final in a faster time of 49.15 to win the Gold Great stuff. Not to be outdone his younger sister Anna Ryan also won National Gold in the Women's U23 Triple jump with a jump clearance of 11.38metres. Unfortunately, her younger brother Dillon Ryan was unable to compete on the day in the Junior Long Jump but hopefully, Dillon who has been having a great season will be back in action again soon. In the Men's U23 Hammer Throw(7.26kg) and Weight For Distance(35lbs) Sean Mockler Won Gold in both events with a distance throw of 60.07m in the Hammer & a distance of 9.34m thrown in the WFD a great achievement. Well done Anna, David & Sean.

Paddy Cummins has been in fine form on the roads of late as was evident in the Clerihan 8km road race last Friday July 15th where he picked up another win in a time of 27:32 this was his third race win of the season adding to his Thurles & Poulmucka victories Well done Paddy. It was also a good day for Martin O'Meara who was making his debut run for the club in 27th place in a time of 37:31 Good running from both men over a testing course in close conditions.

Orlaith and Tommy Club Fundraiser
It's just 1 week to go for Orlaith & Tommy who together are aiming to complete the Celtic Warrior Triathlon in Lough Ennell Co.Westmeath on July 30th. All in aid of raising money for the Moycarkey Coolcroo Track Development Fund You can help support their cause by making a donation or leaving a comment of encouragement @gofund.me/e55f1d8b. They have already raised an incredible €1,486 and are hoping to raise as much as they can The very best of luck to Orlaith & Tommy.