COLUMN: 'Colm Bonner deserves thanks for doing a lot of heavy-lifting' 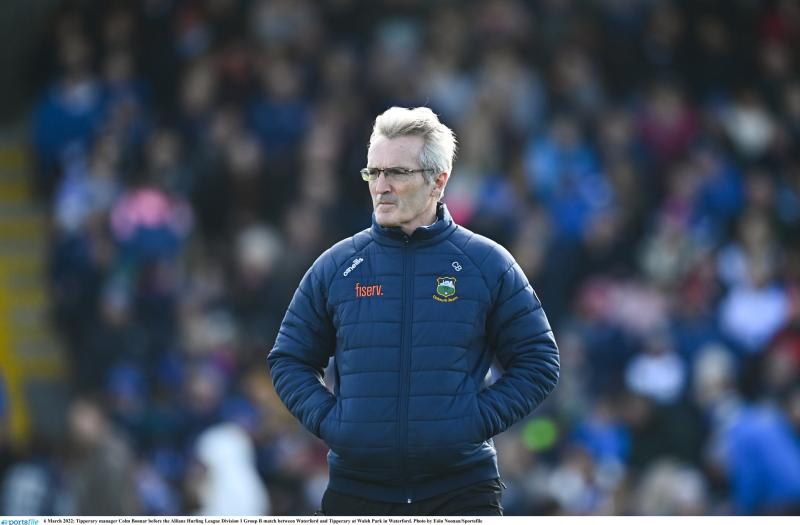 At the start of the county championships last year, it was commonplace to look around the grounds and see a man with notebook and programme in hand, taking notes and keeping a keen eye on proceedings.

Roll the clock forward twelve months, the start of the county campaign again, and that same man has no need of taking notes or keeping an eye on who might make an impact on the inter county scene.

Colm Bonnar gave a lot to Tipperary as a player and selector. He was a man of energy and drive; the player always selected for the hard job; and the one who would go to the ends of the earth to better Tipperary’s cause. It is deeply regrettable that his term as manager of the Tipperary senior hurling team should end so prematurely and in such a fashion.

Despite predictions of this course of action being mooted, it still came as a big surprise - in Tipperary, we don’t tend to do “relieving people of their duty” too frequently, especially after such a short term of office. Yes, there have been a few “by mutual agreement” type of scenarios down through the years, but rarely has a manager and his backroom team been removed so swiftly.

The facts don’t lie though. Tipperary had a very poor 2022 with wins being very scarce and poor performances regular. The tone was probably set in Tralee when the defeat to Kerry raised eyebrows. But, on a number of occasions thereafter, there was a feeling that Tipperary were turning a corner.

Let’s be honest here - I don’t think many expected silverware from the panel in 2022. But, everybody expected more of the form which saw stirring displays against Waterford and Limerick in the championship - the problem was, we still lost both of those games, and we didn’t see enough of that urgency to suggest that we could progress to the All-Ireland series.

We had a win over Kilkenny in the league which was welcome. But, it had been a very poor game and at that stage it was hard to see either team doing anything in the season to come. Well, Kilkenny turned that thought on its head with Brian Cody managing to get a very decent tune from his players thereafter.

One would have to feel a lot of sympathy for Colm Bonnar and his management team. They suffered a lot of bodyblows during the course of the campaign and even as the championship progressed, the hits kept on coming.

From the team which won the All-Ireland Final in 2019, a total of thirteen players were unavailable to Bonnar during the course of the ‘22 season, making it very difficult to gain any traction - take thirteen players out of the Limerick panel right now and see how they would fare.

Public murmurings about the style of management, the coaching and the fitness levels of the players began to emerge on social media and when the narrative changes like that it is very difficult to stop it - when you are explaining, you are losing as the saying goes.

Colm Bonnar is a practical man and he will know that the dice was rolled against him. When the County Board’s Management Committee met last week to engage in a full and frank review of the campaign, they were armed with the feeling of much public unrest; the sense of unease in influential sectors; the players’ thoughts; and the pressure being heaped to ensure that 2023 would be better.

They knew that Tommy Dunne was stepping away - that had been well flagged; and then Paul Curran decided to walk as well. So, only Colm and Johnny Enright remained.

We are not privy to the workings of the inner sanctum but you would imagine that making the decision was not an easy one considering the level of respect Colm and Johnny are held in - great Tipperary men and great hurling men. Making that phone call cannot have been easy.

Personally speaking, I thought Colm and his men had done a lot of the heavy-lifting in terms of rebuilding Tipperary. The resources they had to work with were compromised in the sense of being very inexperienced - they were forced to catapult players into the championship cauldron who might not have been physically and mentally ready for it just yet. But, having been through the experience, they would surely be better for it in 2023.

Yes, things had to change and improvements needed to be made. But, you would have thought that a second year would be granted to see how this would work out. After all, a player always gets a second chance, so why not a manager? But there you go - them’s the breaks, as Boris Johnson says. Oh to get him under a dropping ball!

Tipperary is at the bottom of the pile in Munster and a lot of work is needed to improve the Premier lot. But, you would have to be optimistic - five All-Ireland titles in five years between minor (2), U21, U20 and senior surely gives cause for optimism?

Getting the mix right will be the key and ensuring that those players can be harnessed in a correct fashion will be one of the most pressing items to be included on the CV of any new, or former, potential manager for ‘23.

Perhaps even more important than the manager role, will be that of coach. This is the person who will be out there with the whistle, running the sessions, deciding on the styles and working on tactics with the players - this appointment is crucial, while the whole area of strength and conditioning is also a vital component.

So, Liam Cahill and Michael Bevans are now the appointed men following their departure from Waterford. The announcement on Monday night, just four days after the Bonnar knockout, has left many suggesting that moves had been afoot long before the Cashel man met with the Board on Wednesday. If that was the case, Bonnar’s fate had been ordained long before ever he set foot in Lár na Páirce.

But, ultimately the Board got their man, the one they wanted last year and the one for whom a major clamour was underway during the summer of ‘21. The appointment brings the matter to a close rather quickly, and that’s a positive - it needs to move on now and allow for the management team to put their plans in place.

A lot of work has to be done but supporters need to understand that this has to be a work in progress - it’s still hard to see Tipp winning silverware in 2023, but you’d never know. Perhaps the Cahill factor will re-energise the panel and give everyone a lift. Let’s hope it does. But, Colm Bonnar and his regime deserve our thanks too.