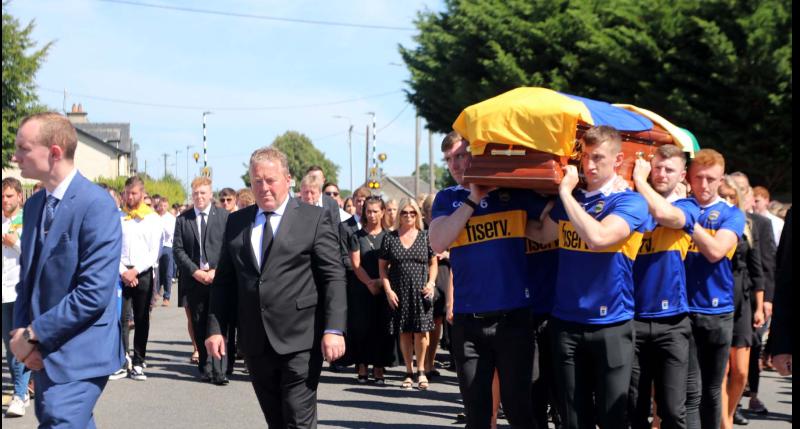 Dillon been carried into the church by his Tipperary team-mates.

Thousands of people lined the streets of the village of Clonoulty on Tuesday afternoon, to pay their respects and say goodbye at the funeral of Tipperary hurler Dillon Quirke.

The 24-year-old died last Friday night after collapsing on the pitch at Semple Stadium while playing for his club Clonoulty/Rossmore against Kilruane MacDonaghs.

The sense of loss and grief was palpable as Dillon's inter-county and club team mates, as well as the opposition on that fateful night, Kilruane MacDonaghs, provided a guard of honour as the funeral cortege made the short journey from the GAA grounds, through the village to St John the Baptist Church for requiem mass to celebrate Dillon’s life and to mourn his passing.

His coffin was draped in the colours of his beloved Clonoulty/Rossmore, as well as the blue and gold of Tipperary, and was brought into the church by his Clonoulty/Rossmore teammates, who each had a club jersey draped over their shoulders to salute their fallen friend.

The eulogy was delivered by Dillon’s uncle Andrew Fryday, who is also chairman of Clonoulty/Rossmore GAA, and despite being visibly shaken, he delivered a lovely speech, recalling stories of Dillon as he grew up, and what a “lovely, lovely young man he was.”

President Michael D Higgins and An Taoiseach Micheál Martin were represented at the funeral, as well as figures from the GAA world also paid their respects, including GAA president Larry McCarthy, Munster Council CEO Kieran Leddy and officers of the board, along with Tipperary GAA chairman Joe Kennedy and fellow officers.

Thousands of people filled and surrounded the church from early morning, as symbols remembering Dillon's life were offered by friends and family during the mass, including his hurley, trademark red helmet and Tipperary jersey to represent his love of hurling and the commitment he gave to both club and county.

There were also concerts tickets, photographs and an apron from the family business.

Father Thomas Ahern presided over the sermon, and said that on Friday last, it seemed like the parish was “frozen in time,” saying that people were really shocked at Dillon’s untimely passing, and it was difficult to believe what had happened to the young man.

Dillon’s sister Shannon went on to deliver a beautiful poem written in honour of her brother, highlighting his virtues as a brilliant hurler and brother, while Dillon’s father Dan mourned his son saying he lost a son, but also lost his “best friend.”

After the ceremony, Dillon was taken to his final resting place in Clonoulty cemetary to be laid to rest with his grandfather, in the close company of the hallowed sod of Semple Stadium where he so often excelled, as Tipperary and the parish and club of Clonoulty/Rossmore tragically came together to put to rest one of its most gifted sons.