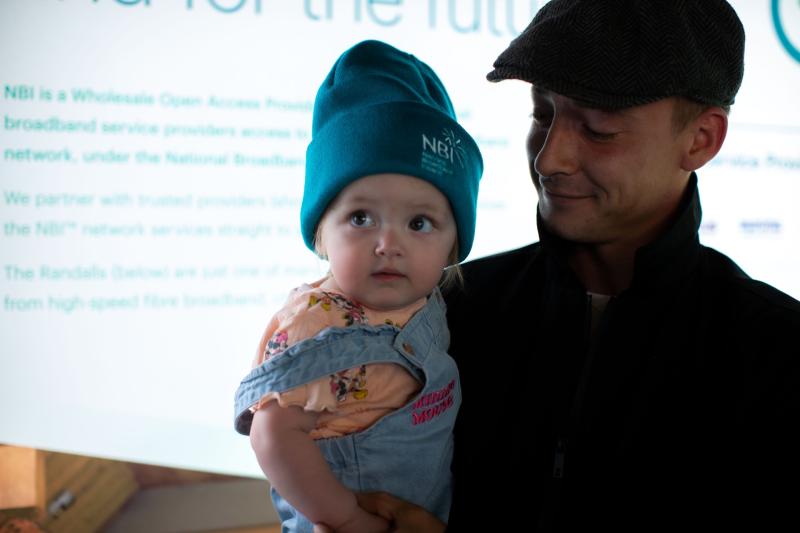 National Broadband Ireland was visited by the Randall Family of Ayle Farm, Co. Tipperary, at their stand at the National Ploughing Championship.. The Randalls are currently featuring in an NBI campaign, demonstrating the benefit of Ireland’s National Broadband Plan in videos filmed entirely on their mobile phones.

The video shows the positive impact that high-speed broadband has made for the Randall family, who have seen massive improvements in internet speeds which has brought benefits for family life, career opportunity and security in a remote location.

Peter Randall said: “Living in a remote area, security is always a concern. One of the benefits of high-speed broadband was the peace of mind that comes from being able to access a live feed and security alerts, which are things we could never do before. Once you have access to this fast connection, you wonder how you ever managed without it.”

Lorraine Randall explained: “I’ve been able to get a remote job working for a global company from my home office on the farm. One of the conditions attached to the position was access to good internet speeds so having the connection to NBI’s high speed opened up this opportunity for me.”

Peter Hendrick, Chief Executive Officer, National Broadband Ireland, said: “Families like the Randalls really bring home the benefits of the National Broadband Plan and access to a high-speed fibre network. It actually opens up limitless possibilities for families, farms and businesses in rural Ireland. NBI’s own surveys have shown that seven in 10 people believe broadband could open the door to higher pay and the Randalls are living proof of the opportunities that come with it.

“For farmers, a high-speed broadband connection is a game-changer. It not only makes day-to-administrative tasks like the online submission of forms so much easier, it allows access to new agri-tech innovations like the ones on display at the Ploughing Championships.”