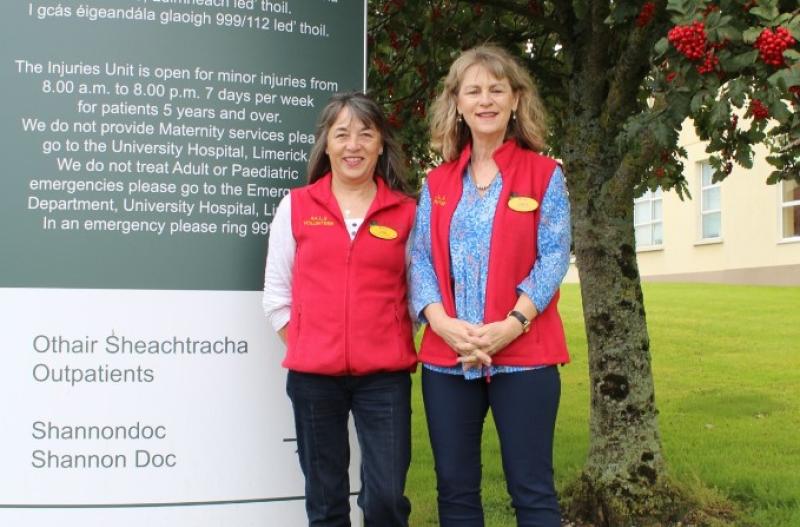 PALS volunteers are the public face of the service, dressed in red tabards with an embroidered yellow logo, and have had a transformative impact on patient experience in our hospitals, serving in a diversity of roles, whether as way-finders, patient companions, information guides, and gatherers of anecdotal patient feedback.

For Virginia O’Dowd, a retired school teacher and former public representative who was once Town Mayor of Nenagh, volunteering for PALS has been an experience that has enriched her, almost incalculably so.

“PALS makes a huge difference to the hospital experience for patients. There are no other demands on us, so we can give total attention to the patients. We volunteers also get a huge amount out of it. I always come out feeling richer, somehow; I get more out of it than can be measured,” Virginia explains.

PALS volunteers help to firmly situate the hospital within the community where it is located, which in turn puts patients, relatives and all visitors at their ease, helping to create a more user-friendly hospital experience.

Virginia reports that all the Nenagh PALS volunteers feel a huge sense of pride in Nenagh Hospital and its place in the local community.

“Years ago, I was involved in the Nenagh Hospital Action Group, and when I see it now, with its bright, modern wards and refurbished facilities, I’m so proud of it. It’s great to see people from all over the MidWest using it, from West Limerick, Clare, South Tipperary, the Kilkenny border, Tullamore and elsewhere,” she said.

PALS also provides immediate feedback about care standards and other aspects of the patient experience. Virginia says the feedback from Nenagh patients is unanimously positive: “There is the greatest respect for staff. In PALS, we hear that from the patients every single day.”

When a person requires hospital care, even the smallest act of kindness and support is significant, and this is at the core of the PALS ethos. “Sometimes, elderly people will be driven to the hospital, and of course, drivers cannot park outside the door, so we wait with their relative until the driver parks, and we also greet people who arrive in taxis. These are simple, reassuring things that make such a huge difference.”

Virginia emphasises how important it is to be vigilant for patients who look as if they need a helping hand or a kind word when they arrive for a hospital appointment, which, for many, can be a disorienting or frightening experience.

She recalls being approached in a shop by an elderly man who thanked her for being his friend in the hospital. “I didn’t recognise him at first, but then remembered him from some months ago. He’d come into the hospital alone, and looked ill and quite stressed. I asked if he needed help, and he told me he was there for an appointment, so I took him to admissions, got him a drink, and sat with him until he was called. I thought no more of it, but when I met him months later, he told me that on the day, he would have left if there hadn’t been someone who made time for him. It was great to see the man looking so well and it shows the importance of PALS.”

As a Befriender on the PALS volunteer team at Nenagh Hospital, Toomevara resident Polly Ryan has a more specific duty: “Meeting and greeting is my thing,” beams Polly. “I’m not just there to show people how to find places, but also, if the patient wants, to sit and wait with them, chat, and help to take their mind off their appointments.”

Once fearful of hospitals herself, Polly has discovered such trepidation affects all age groups: “You can read it in their faces. Sometimes, all they want is for you to sit and chat with them. So I’ll talk about something I’ve been through. Hurling is a great subject, particularly with our Limerick patients. Young people, even when they’re in with parents, might need someone else to chat to who can lighten things up a bit, because, well, I suppose Mammy might be worried as much as they are,” Polly explains.

Polly is the ultimate people’s person, and a force of nature who refuses to be brought down by the challenges life can present. “In 2008, I went into the hospital in Limerick on a Monday morning, had a mastectomy that afternoon, was discharged on Friday, and was out dancing at a Mike Denver show the following Monday night. We’ve all been to hospital for what I describe as personal NCTs. Most people don’t want to come in for things like colonoscopies, and when I describe them as NCTs, something we don’t like doing but have to, it helps to lighten the mood for them.”

The call to join the PALS volunteers three years ago came at the right time for Polly, who suddenly found herself at home alone after being married for 30 years, and mother to five sons who had left the nest.

Her love of people and volunteering and cheerful, friendly disposition, as well as her own experiences of the health system, makes Polly a natural fit for the role of PALS Befriender. “I used to have a fear of hospitals when I was a little girl, and having had five children, and come through cancer treatment, I know how terribly worrying it can be. I’ve always found that when you’re feeling low or overwhelmed by it, all you need is a little bit of kindness, someone to tell you it will be all right, to hold your hand for a minute and calm you down. It makes such a difference.”

A beacon of positivity, Polly recently returned from a holiday to the US, where she grabbed a window of opportunity during a stopover in Philadelphia to run up the steps immortalised by Sylvester Stallone in the ‘Rocky’ movies. She began running two years after her mastectomy, and celebrated five years free from cancer by running the Dublin City Marathon. She’s also a keen long-distance walker. Polly’s indefatigable spirit shines through all duties she undertakes with PALS.

Her love of dance meant that when staff were seeking a traditional set dancer to perform for patients on the wards during St Patrick’s Day celebrations in 2018, Polly stepped forward. “I danced on almost every ward in the hospital that time. There was a man playing reels on the mouth organ, and I was doing the dancing, and the patients all loved it.”

“I love PALS, and I would do it every day if I could. All the staff are fantastic, and it’s such a lovely hospital to work in. And I think people really appreciate it. A large number of patients will come back to us from time to time, just to say hello and say thanks for being there for them,” Polly added.

Cathrina Ryan, Operational Director of Nursing at Nenagh Hospital, said that within four years, the PALS volunteers had become so much a part of service delivery, and were so embedded in Hospital culture and activities, that it would be “difficult to either recall or imagine the Hospital without them”.

“As Virginia said, it’s the dedicated attention to the patient, one-to-one, in an unrushed manner, that puts them on ease when they arrive at the hospital. Our patients are from Clare and Limerick in addition to our local patients, making the Befriender role invaluable to patients who may not have many visitors, and Polly has befriended patients, staff and visitors alike,” Cathrina added.

Miriam McCarthy, Manager of Patient Advocacy Liaison Services across UL Hospitals Group, says that Virginia and Polly, and all PALS volunteers, create a multi-dimensional value to the hospitals in the Group.

“The presence of volunteers helps to demonstrate the role of hospitals in communities, and represents our willingness to enable members of the public to help us help our patients. They’re also an invaluable source of information, comfort and support for patients, and as they are not involved in delivering clinical care, add another dimension to the patient care experience in our hospitals,” Miriam added.

“I echo Cathrina Ryan’s comments about the volunteers in Nenagh Hospital. I personally cannot imagine our hospitals without volunteers, who bring a smile to my face every time I meet them. They serve as role models and set a high bar for all of us in our interactions with patients,” Miriam concluded.