Keller - “My priority is to fall in love with sailing again” 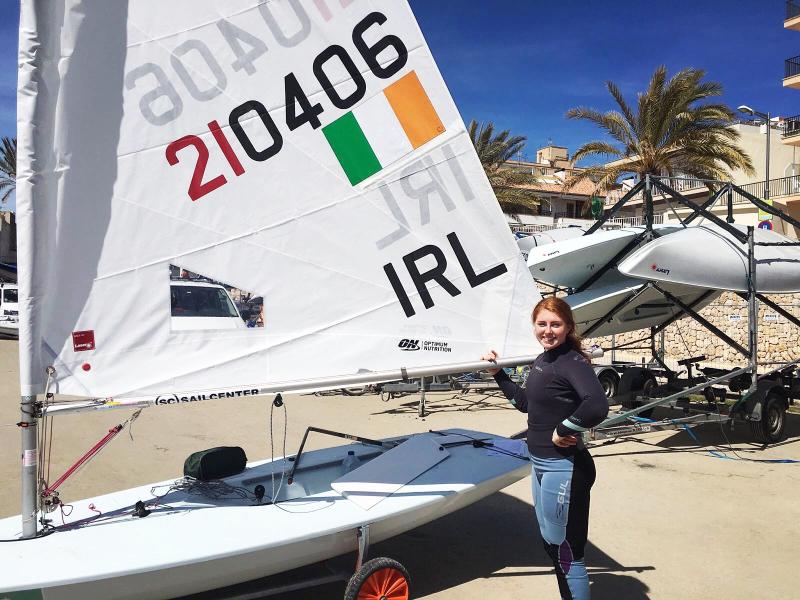 At just 23 years old, Irish sailing champion Aisling Keller has had a sporting career many can only dream about. Despite coming to the sport competitively later than many of her peers, Keller has represented her country throughout the world, secured national titles and was the vital ingredient in securing Ireland’s place at the 2020 Olympics.

Growing up in Coolaholiga, Nenagh the Trinity physio student competed in almost every sport going in the area, first taking to the water at age 10.

Her then principal of Carrig NS Liam Maloney was an avid sailing enthusiast, encouraging his young pupils to get involved in the sport through the schools sailing programme.

Watching her older brother Eoin get involved at summer sailing courses with Lough Derg Yacht Club further encouraged her to take up the sport.

“We would be quite competitive even though there are four years between us. Once he started going I wanted in too,” she says.

In just a few short years, Keller worked her way up the ranks to become one of the country’s best young sailors. With no family connections to the sport as well as hailing from a midlands county, Keller’s rise is all the more impressive.

Although a natural athlete, she dismisses any suggestion of being a ‘child prodigy on the water.’

“I really didn’t come into my own until I was about 13 or 14. I think I did have some natural ability but it really just escalated from the summer courses and at weekends we would travel to Cork or Dublin for competitions or to train.”

With support from her parents, Aisling and elder brother Eoin began linking up with other sailors to continue their training progress. As she got more heavily involved in the sport, her local club rallied around her, in particular club manager Claire Toohey and former teacher Liam Maloney.

“Claire was great for helping to raise publicity and on the sponsorship side of things because once you get to a higher level it can be quite expensive,” says Keller.

“Absolutely, sailing has helped me to see places I never would have gotten to visit on my own,” she says.

However, as far back as Transition Year, Keller was already setting out her own plans for representing her country on the world stage.

“I was studying for college exams recently, sitting at my old desk at home and I found a list I’d written in TY. My goals were to study veterinary and campaign for the 2020 Olympics,” she says.

Aged 16, having narrowly missed out on making the U19 Irish squad, Keller was taken under the wing of a new coach from Lithuania who she worked with throughout her TY year.

Under his tutelage, her performance improved enough to earn her a place on the squad that April.

“After a training camp that February, Sunny was filling in my mam on how I was getting on and suggested the Tokyo Olympics would be a good goal for me. To have someone of his experience say that I would be good enough to aim for the Olympics was a major turning point.”

While Keller had been encouraged to campaign for the 2016 Olympics, she decided to focus on her studies and complete her Leaving Cert exams instead.

After finishing school in September 2016, she took up a place in UCD to study engineering however juggling training, competing internationally and coursework took its toll and she eventually decided to focus her energy full time on sailing. She later returned to university to study physiotherapy in Trinity and is now in her second year of the course.

Although she was competing at the top of her game, living the athlete lifestyle also required a significant amount of sacrifice.

“In school I would have missed out on nights out or trips with friends because I was either competing or training. There was pressure but I put it on myself. I gave up a lot to compete, including putting a hold on college, and I wasn’t going to let it be for nothing.”

Her determination paid off when in July 2019 Keller won at the Laser Radial World Championship in Sakaiminato, Japan securing Ireland’s place at the 2020 Olympics.

Arriving back at her home club in Lough Derg, Keller was treated to a hero's welcome.

“After Japan I felt this massive sigh of relief. I had done it.”

In February 2020 the first of three trail regattas to select the Irish representative for Tokyo took place in Melbourne. With the Covid-19 pandemic taking hold worldwide, the remaining two trials, due to take place over the following two months, were cancelled.

Governing body Irish Sailing decided to nominate Olympic medallist Annalise Murphy to take the spot in the boat at the rescheduled games in the summer of 2021. Murphy had finished the ILCA Laser Radial Women’s World Championship in 12th place and under the selection process the person with the best performance in the trial regattas secured the nomination.

Despite securing Ireland’s place in Tokyo, Keller’s Olympic dream had come to a halt.

“It was hard, especially as I had put in so much work.”

Last March Keller resigned from the Irish Sailing Team, a decision she does not regret.

"I felt it wasn’t working for me and I wasn’t reaching my potential,” she says.

During the initial lockdown Keller began looking at her options to continue pursuing her Olympic goals including a new keel boat class for the 2024 games.

However ongoing travel restrictions put a dampener on travelling to France to trial the new boat. Instead she focused her energy closer to home coaching younger members in Lough Derg.

“I want to try and get more competitive sailing up and running in Dromineer. Maybe run a girls camp to show them what a training camp would be like,” she says, adding that she would like to see more Lough Derg Nenagh sailors on the circuit.

“I think I’ll always competitively sail but you have to make a big decision if you are going to campaign for the Olympics. You can competitively sail and still do college or coach at the weekend but you can’t do that if you want to campaign for an Olympics. At the minute I’m focused on getting my degree and if the different boat suits me, my priority is to fall in love with sailing again.”