Woodie’s DIY, Home and Garden have raised over €2.5 million for charity over the last seven years. 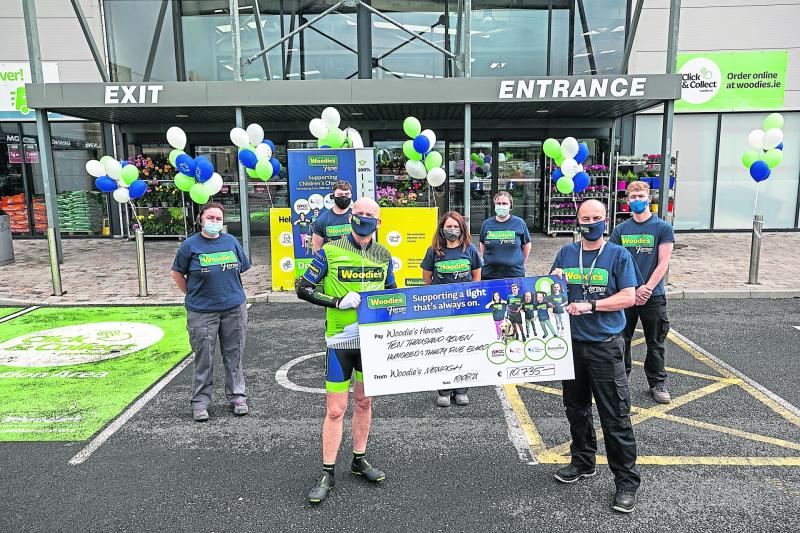 ary Cambell of Woodie’s Nenagh, pictured with colleagues, during the Woodie’s Heroes Charity Cycle around Ireland

The colleagues at Woodie’s Nenagh would like to extend a big ‘thank you’ to their customers, colleagues and suppliers who helped them raise €10,290 during the seventh annual Woodie’s Heroes campaign this summer.

A cheque was presented by the store to one of the two teams of Woodie’s cyclists, including Woodie’s CEO Declan Ronayne who each set out on a gruelling 1,000km cycle around Ireland last week to collect the funds raised by Woodie’s stores nationwide in aid of four Irish charities: ISPCC Childline, Autism Assistance Dogs Ireland, Down Syndrome Ireland and Barnardos.

Woodie’s DIY, Home and Garden have raised over €2.5 million for charity over the last seven years. Donations for the 2021 Heroes campaign will continue to roll in up to the end of September. There were more ways than ever to donate this year, with customers able to add a donation to their bill at the till, online, or by text. With your help, Woodie’s have surpassed their fundraising target of €500,000 and make a difference to those most in need.

Everyone at Woodie’s Nenagh is blown away by the generosity and support that has been shown towards them throughout the campaign. It was a proud moment for the store as they welcomed the cyclists and presented the €10,290 cheque which will help the four chosen charities to continue their great work and remain a light that is always on, day and night, looking out for the children of Ireland and their families. There’s still time to get involved too as you can still donate online or over text:
You can donate online at woodies.ie.

CEO of Woodie’s Declan Ronayne said: “Woodie’s are very grateful for the generosity and dedication shown by our colleagues, customers, and suppliers once again for our seventh Woodie’s Heroes campaign. It is a great feeling visiting the stores around Ireland as we cycle our way to them all to thank them for the fantastic charity work they do for the four weeks of Woodie’s Heroes fundraising. There might be a few aching bodies, but it is a humbling experience! It is always a highlight of my year cycling to the stores and hearing all about the fundraising efforts of the stores. I am so proud of everyone’s achievements.”