A new set of St. Michael’s heroes to acclaim 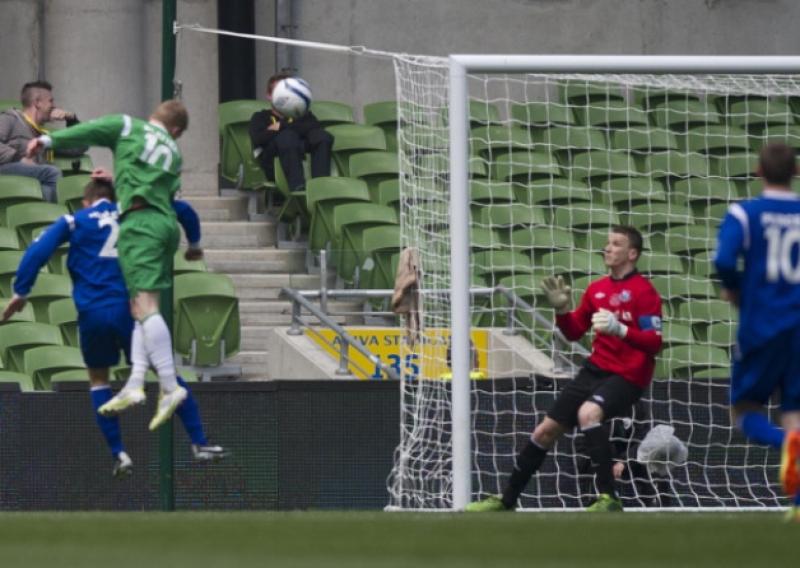 It was an astonishing victory,secured with a powerful performance worthy of the spectacular venue and the historic occasion.

It was an astonishing victory,secured with a powerful performance worthy of the spectacular venue and the historic occasion.

St.Michael’s and Tipperary Town have a new set of heroes to acclaim after the Saints marched their way to an incredible triumph, a four nil FAI junior cup final win at FAI headquarters on the 40th anniversary of their first national title in 1974 after the heartbreak of four defeats in finals since 2000.

It was a day of unbridled joy, an emotional occasion and a day of great pride for everybody associated with St.Michael’s.

Supporters made their way to the Aviva on a special train from Tipp Town that morning with over one thousand St.Michael’s fans present on the day to witness the momentous occasion.

They were treated to an awesome display from their team that secure a coveted FAI national title to stand beside the haul of silverware already collected this year through a domestic league and cup double and Munster FAI junior cup title.

For the players this was a day to savour as the majority of them had tasted defeat more than once in recent years in the junior soccer showpiece.

Lifting the FAI trophy in the Aviva more than made up for the devastation of previous years as St.Michael’s players ran to the lower east stand to celebrate a convincing four nil victory over Ballynanty with their ecstatic supporters when the final whistle went.

Goals from the strike partnership of David Slattery and Pat Quinn with a wonderful late double from Jimmy Carr lit up this remarkable day for St.Michaels.

It was a game that St.Michael’s were in control of with the exception of a ten minutes spell prior to the all important breakthrough in the twentieth minute.That David Slattery goal had come almost against the run of play as Ballynanty recovered from a nightmare start to assert some pressure on the St.Michaels goal.

St.Michaels had started much the brighter and the right wing combination of full back Chris Higgins and winger Jimmy Carr set the tone.The pair doubled up to exert enormous pressure on Ballynanty but St. Michaels, who created four clear cut chances in the opening nine minutes, failed to make that dominance count on the scoreboard.

Ballynanty, through the pacy Alex Purcell, recovered and enjoyed their best spell and his intelligent deliveries into the danger area caused some concern in the St.Michaels defence.

A lighting fast breakaway by Carr however set St.Michaels on their way.He hung up a beautiful ball to the back post for David Slattery who timed his jump better than the defender and his well directed header beat the Ballynanty keeper from a tight angle.

From that moment on St.Michaels were in control. The outstanding pairing of captain James Walsh and Paul Breen at the heart of the St.Michaels defence comfortably dealt with Ballynanty whenever they threatened.

After the re-start Ballynanty won three corners in as many minutes and those were capably handled by goalie Aaron Wall.

St.Michael’s could afford to sit back and catch Ballynanty on the break and that they did after sixty six minutes when the excellent Thomas Fahy surged forward from his defensive midfield duties to play a clever reverse pass to Pat Quinn.

Quinn still had a lot to do to hold off the defender in the area and he lofted a beautiful strike to the net to put St.Michaels on the road to victory.

That win was further embellished with two goals flawlessly executed by Jimmy Carr who had a brilliant game for St.Michaels from start to finish.

His first came after seventy nine minutes when Richard Ryan and Carr found themselves two on two in a counter attack.Ryan waited for the right moment to play a perfectly weighted pass into the path of Carr who finished to the net without breaking his stride.

Five minutes later Carr, with some stylish footwork, deceived the defender to make space for himself before shooting powerfully past the helpless Stephen McNamara on the Ballynanty goal.

A rousing rendition of “O When The Saints’ started to fill the impressive stadium as St.Michaels cruised to a historic victory and the celebrations began long before the final whistle went.