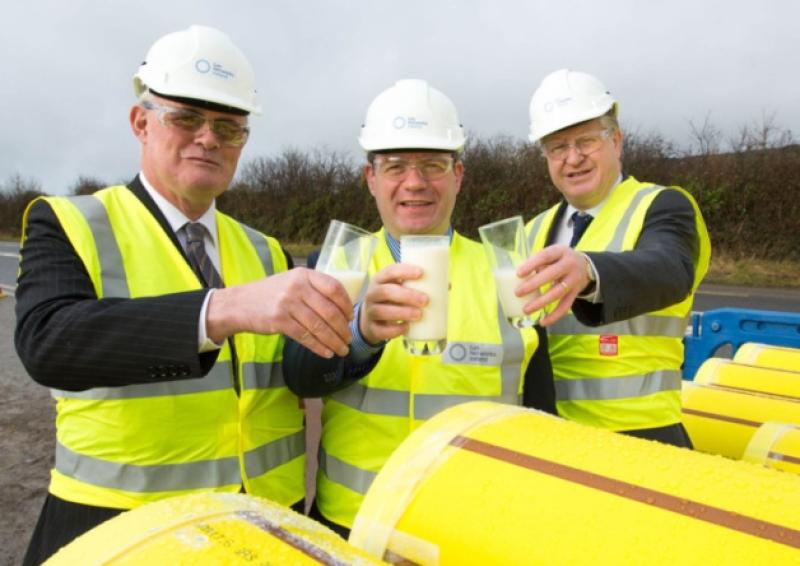 The CEO of Arrabawn, Conor Ryan, has said that the co-op and its suppliers will be among the biggest beneficiaries of the connection of natural gas to Nenagh this summer.

The CEO of Arrabawn, Conor Ryan, has said that the co-op and its suppliers will be among the biggest beneficiaries of the connection of natural gas to Nenagh this summer.

Speaking following a meeting with Aidan O’Sullivan, general manager of Gaslink – an Ervia subsidiary charged with developing, maintaining and operating the natural gas transportation system in Ireland – in Nenagh, the co-op chief said that the connection in May will further accelerate growth at Arrabawn.

As Nenagh’s largest energy consumer, the gas connection, he said, will wipe as much as €2m off the co-op’s operational costs, with the savings ultimately passed onto suppliers by enabling the co-op to continue to pay among the most competitive milk prices in the country.

The connection to Gas Networks Ireland’s national grid is most timely as it boosts operational efficiencies and helps offset against turbulence in international markets for dairy products.

It also comes on the back of a €15.7m capital investment programme over the past five years at Arrabawn that, together with the fuel costs reduction, is transforming the business and turning it into one of Ireland’s most efficient processors, he said.

“Knocking €2m per annum off your cost base is a huge boost and that’s why we led the charge on this and spent two years lobbying for it.

“We knew it would make such a huge difference to our business and it is happening at a really good time.

“We have been focused, through a €15.7m investment programme, over the past five years on driving efficiencies and achieving greater competitiveness.

“That’s what has enabled us to be amongst the top co-ops in the country on milk price to suppliers.

“The €2m in savings that natural gas gives us will reinforce our competitiveness.

“It equates to 1cent per litre for suppliers and with uncertainty globally over milk prices in recent times, that’s a big boost.

“The installation of gas is within touching distance now.

“None of this would be happening were it not for the support we have got from Minister Alan Kelly at a political level and, of course, Gaslink. It’s a win-win situation, for Arrabawn, our suppliers and, indeed, the town,” he said.