Family live in fear that another landslide will damage home 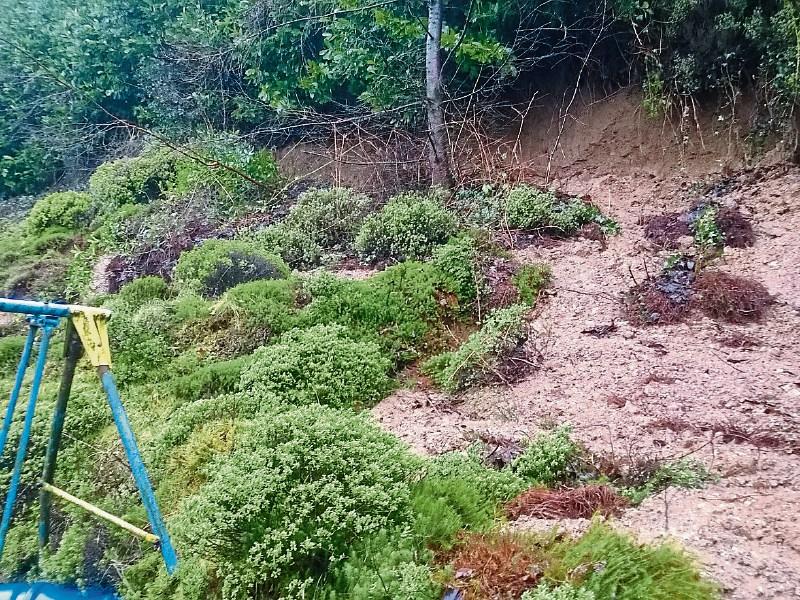 A farming family forced to evacuate their 60 cattle when a landslide engulfed their farmyard near Carrick-on-Suir, are living in fear that further wet and stormy weather over the next few months will set off another landslide that will damage their home.

Michael and Anna Dunne and their five children from Kildroughton, Carrick-on-Suir faced a major crisis on Wednesday, December 30 when the high landbank overlooking the rear of their farmyard and garden collapsed.

The landbank, estimated to be between 40 and 50ft high, is the boundary of the Coillte forest bordering the Dunne's farm and home that are located on the Carrick to Kilsheelan Road between Millvale and Glencomeragh.

The deluge of mud and trees from the landbank overlooking the farmyard covered most of the yard, pushing and covering silage bales and pouring into the cattle shed.

The landslide also covered a large portion of the family's garden at the rear of the house next to the farmyard after smashing through the garden boundary picket fence.

While the heavy rains and storm force winds have been replaced by colder, drier weather for the time being, the Dunnes are living with the constant worry that another landslide will happen if the bad weather conditions return and it will be their house that is damaged.

Anna Dunne says their fear is the adjacent section of the landbank overlooking the gable wall of their home will collapse in future heavy rains.

She points out that it's still only January and they don't know what kind of weather is in store over the next few months. Two of her children, including her 17 year-old son Nicholas, who is autistic, sleep in that part of the house and she fears for their safety.

She stayed up all night after the recent landslide to watch the landbank outside the house in case it moved.

"Nicholas can't speak and if anything happened there is no way he would be able to shout or tell us," she explained.

Anna said Michael became concernd last week after listening to a weather report forecasting more rain and considered moving the family out of the house temporarily. Such a decision won't be taken lightly by the family as any change in routine and surroundings would upset Nicholas.

Looking back, she said the situation was a nightmare for the family but on the positive side they or their livestock weren't injured.

Most of the landslide happened in two large gushes within the space of half an hour on the afternoon of December 30 following the torrential heavy rainfall of the previous day.

Anna recounted that Michael was working in the yard that morning when he noticed bits of the bank starting to slide away.

"It was a gradual thing from early morning. Michael was feeding the animals when it started to worsen. One big surge came around 3pm. We had to try and get the animals outside the shed. The landbank is right at the back of the shed.

"As the clay and muck started to go into the shed we put the cattle into the yard and thought they were okay but then there was another big surge headed towards the yard and we had no other choice but to put them out into the driest field we had. They stayed there overnight."

Anna said many of their silage bales were damaged but their feed bin situated directly in front of the landbank survived, probably because it was filled with about feed the day before. Unfortunately, they can't get access to the bin and the feed inside because it's surrounded by several feet of soft mud.

Coillte took action the day after the landslide to dig a channel in the forest to divert excess water from the area near the Dunne's property.

The IFA and local politicians ranging from Ministers of State Tom Hayes and Paudie Coffey and TD Mattie McGrath to FG Cllr Seanie Power have visited the farm to offer advice and assistance to the family. Coillte representatives and insurance assessors have also been in discussions with the family.

Anna said they won't be able to start work to clear their yard, shed and garden of the fallen trees, mud and debris until the summer months. To do this work now will only create space for more mud to slide into the farm yard and garden if heavy rains return, she explained.

The cattle are being temporarily housed in a shed near Kilsheelan until the remedial works are carried out on the farm yard. Anna said they were lucky to find the shed at this time of the year.

She said the family were amazed and deeply grateful to everyone who had offered them help over the past two weeks. "We are thankful to all the people who offered us food for ourselves and offered fodder and transport for the cattle and all who were sympathetic and shocked about our situation," she told The Nationalist.