Tipperary farmer a pioneer in the co-operative movement 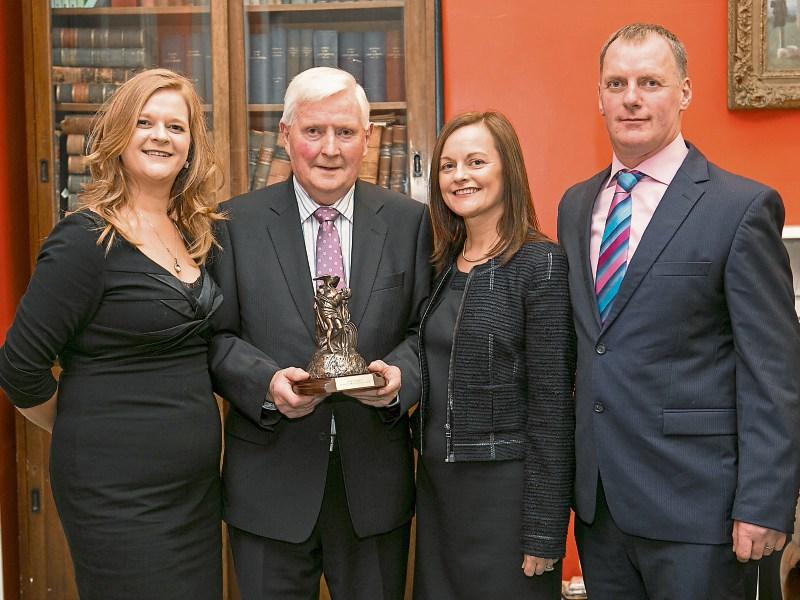 The outstanding lifelong contribution to the Irish co-operative movement by the former Chairman of Avonmore and Glanbia Co-operatives, John Duggan Ballynennan, Drangan, has been recognised nationally by the industry’s highest national honour - The Plunkett Award for Co-operative Endeavour.

Mr. Duggan attended the ceremony in Dublin with his son, Colm and daughters, Miriam Nugent and Bridget Duggan.

Presenting the award, ICOS President Martin Keane said - “John Duggan is a true visionary, who in the pursuit of excellence, devoted an enormous proportion of his life and energy to the Co-operative movement for the betterment of fellow farmers and Irish farming in general.”

“John’s exceptional personal contribution is recognised by this prestigious award which is named after Horace Plunkett, the founder of the Irish co-operative movement. “It is a testament to his selfless commitment to the co-operative movement where he made a significant and strategic contribution to structural change in the industry and to the widespread benefit of farmers, producers, shareholders and rural communities.”

As the Chairman of Avonmore Co-operative and PLC, John Duggan was instrumental in the formation of Glanbia Co-operative through the amalgamation of Avonmore and Waterford Co-operatives in 1997, following which he was elected as its first Chairman, a position he held until 2000.

He retired from the Board of Glanbia in 2001. During all of his period as Chairman of Avonmore and subsequently Glanbia, he served not just on the Board but also on the Council of the Society, the South Tipperary Regional Advisory Committee and the Drangan Area Advisory Committee. He retired from the Drangan Committee at the end of 2006, after 43 years of unbroken and distinguished service.

He was first elected to the Committee of Management of Drangan Co-operative Society Limited in 1963. Together with his colleague John Ryan he represent Drangan on the 16 member steering committee set up by eight local creameries in south Tipperary. This subsequently resulted in the formation of South Tipperary Farmers’ Co-operative in 1967 where he was also elected as its first Vice-Chairman and then Chairman from 1970 – 1973. He subsequently played a major role in events leading to the formation of Avonmore Farmers’ Co-operative Society Limited in 1973. He served as Vice-Chairman and then Chairman where he supported and promoted the successful creation Avonmore Creameries plc.

Mr. Duggan has served with distinction on bodies at national level including ICOS, Bord Bia, Teagasc, FBD plc and numerous Department of Agriculture advisory committees. He currently serves as Chairman of the Single Farm Payments Appeals Committee, which was set up by the Department of Agriculture to deal with farmers experiencing problems with the Single Farm Payments system and allocation of Entitlements from the National Reserve.

Mr. Duggan has been a lifelong supporter of Macra na Feirme including Chairing the South Tipperary and Tipperary Executives of Macra where his qualities as a debater and public speaker were legendary including competition at national and international levels. As a former hurler with his local club, he is an ardent and knowledgeable supporter of his native Tipperary GAA and a regular attendee at games.

John was married to his beloved wife Breda (McGrath) who passed away in 2013.

They have one son, Colm and two daughters, Miriam and Bridget and five grandchildren.

John continues to farm with his son on the family farm at Ballynennan, situated between Drangan and Mullinahone.

The Plunkett Award is the premier honorary award made by ICOS annually.

It is presented to one individual each year who is regarded as having made an outstanding lifelong contribution to the co-operative movement in Ireland.

ICOS (the Irish Co-operative Organisation Society) represents over 130 co-operatives in Ireland – including the Irish dairy processing co-operatives and livestock marts – whose associated businesses have a combined turnover in the region of €14 billion, with some 150,000 individual members, employing 12,000 people in Ireland, and a further 24,000 people overseas.