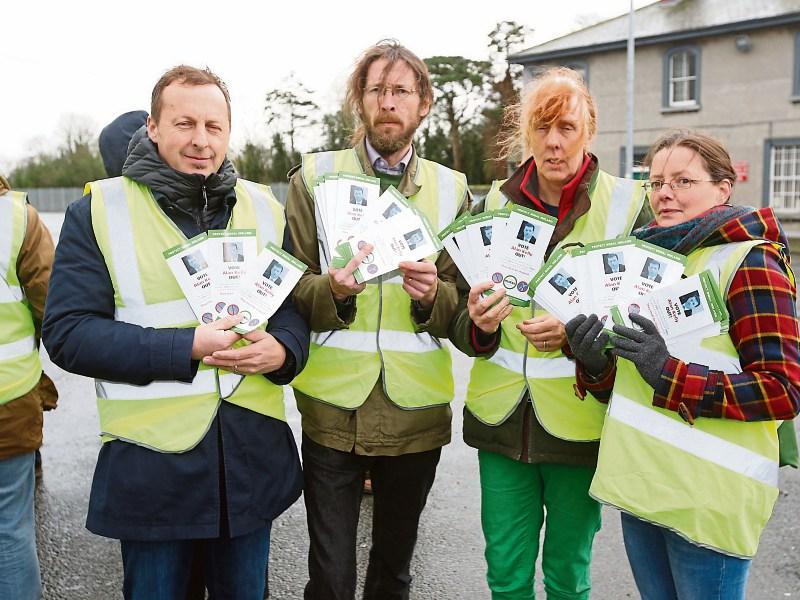 UP to 40 canvassers from Protect Rural Ireland targeted Environment Minister Alan Kelly in his Tipperary constituency over what they say is his inaction on the wind turbines issue.

The protestors gathered at the Nenagh railway station before dispersing door-to-door across the town. They also fly-posted cars in the local church grounds.

Protect Rural Ireland (PRI) is a national alliance of community groups who intend to unseat a number of key politicians in the upcoming general election.

It claims Minister Kelly has not acted to halt the construction of wind farms and pylons in County Tipperary and in the countryside at large.

Nor has he introduced safe set back distances between turbines and homes across Ireland.

Tipperary was the latest constituency to be targeted in a nationwide PRI campaign against turbines and pylons that involves canvassing, flyers and social media.

Spokesman Henry Fingleton said: “The fact that up to 40 people turned out on Saturday to canvass in Alan Kelly’s home constituency sends a clear message to him.

“He has turned his back on rural Ireland. Promises about robust wind guidelines have turned out to be nothing but hot air and bluster.

“As Minister he could have sorted the set back issue. Instead, he did nothing.

The campaign places the protection of Ireland’s landscape, environment and people centre stage, and in turn seeks to protect Ireland’s tourism, agriculture and equine industries.

She said: “My family, friends and neighbours face the prospect of a future living inside a 22-turbine wind farm. We have spent the last two years fighting to stop this development.

“So far our fight has not been successful. We are not giving up. Our homes and our lives deserve protection and respect. Alan Kelly, as Minister for the Environment, should be key to ensuring that protection.

“With the stroke of a pen he could have, and should have, signed new wind energy guidelines which would offer protection to people. Instead he sits on his hands and thereby ensures that we are left to the mercy of the developers and landowners.

“No amount of spin can ever justify Minister Kelly’s inaction.”

She added: “Tipperary is known as the Premier County. I am Tipperary born and bred and believe that we have so much to offer the world as a place and as a people.

“To allow our beautiful landscape, our historical sites, our wild places to be overrun by industrial development is a shame. It is something that will haunt us for generations.

“When we have filled all our hills with concrete, killed our birds and bats, taught our farmers that this is the way forward, split our communities and forced homeowners to leave, will we still lay claim to the title the Premier County?”