Priceless Cashel book collection to be saved by move to Limerick

Promise to bring Bolton Library books back for permanent exhibition 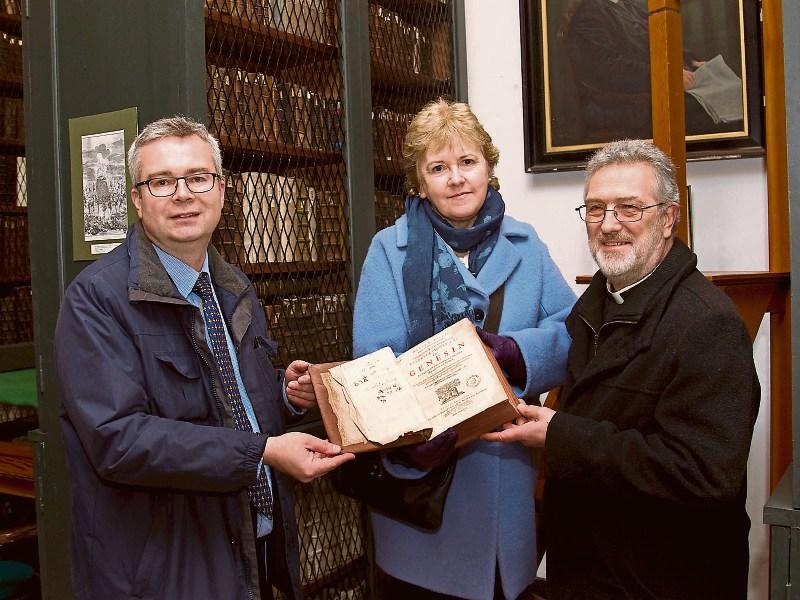 Rare and priceless books at Cashel’s Bolton Library dating back to the 11th century, will deteriorate “beyond repair” if action is not taken now.

After 20 years of working to maintain the Bolton Library collection, librarians say conditions have reached a crisis point and given the unique nature of the books it “would be a crime” to allow this - so an agreement has been reached to move all the books to the library at the University of Limerick.

Ken Bergin, Special Collections Librarian at UL’s Glucksman Library, and Gobnait O’Riordain, Director of Library and Information Services at the university, joined with Dean Gerald Field to announce the move, following an agreement between the Church of Ireland and the university.

Despite efforts over the last 20 years to keep the collection in Cashel, Mr Bergin explained that the only solution for the library now is its relocation to the specialised facilities at UL.

It is expected that all the precious books will be transported to Limerick in the next month.

However everyone involved is committed to bringing a permanent exhibition back to Cashel when the books have been preserved and treated for dampness and possible insect infestation.

As well as saving the books, Mr Bergin says he believes a full cataloguing of the collection will reveal even more treasures than have already been listed.

The collection will always be known as 'The Bolton Library at Cashel' collection and it will remain in the permanent ownership of the Church of Ireland.

Speaking in the library, last week, he said the library contains books that are avaiable to scholars in very few institutions and they need to be available for study, but can't be in their present condition.

“Books are like sponges. The humidity level here is 70% to 80%. The books have absorbed so much water they are jammed together and don't slide in and out of the shelves. What is required is a very slow process to dry them out. There is a good chance there is an infestation of beetles and that needs to be treated.

“It is impossible to do anything here in these conditions. They need very stable environmental conditions. There was never the capital to keep it going or maintain the library. It's an expensive business.”

Mr Bergin, speaking with genuine concern for the books, went on to say that the amount of water the books have absorbed is causing the deterioration of the paper. “That has to be stopped before we lose the material,” he warned. “We can't have that happen with material from the 11th and 12th century.

“These books were meant to be read. They're meant to be used. This needs to be turned in to a library where scholars can come and use them again.

“If nothing is done they will go beyond repair. Given their unique nature that would be a crime.”

He estimated it will take 12 months to dry out the books in a specialised and monitored facility in UL.

He paid tribute to the work of Dean Philip Knowles and Cashel Heritage Centre who did their best to look after the library.

Gobnait O'Riordain emphasised that the university supports the plan to bring a permanent, state-of-the-art exhibition back to Cashel. This would include books from the library, as they are restored, and high-tech displays telling the story of the library and explaining its part in local history.

She explained that while there is no estimated cost for this preservation project, a similar project carried out by the University of Ulster was granted £5 million by the UK government.

For now the cost of transporting the books to Limerick will be covered by the university and as they have the specialised staff and adequate storage facilities that will not be an extra cost to them. They hope to receive funding for the restoration process.

Ms O'Riordain said UL are already getting queries from international scholars about the books and have to turn them away.

Dean Field said there is an expectation that the library exhibition could come back to be housed in the former civic offices in Cashel.

The books in the library are “literally invaluable” he said, explaining that no insurance company would even quote to insure them, as they are not replaceable. “It is really not an option to keep the collection in this building.” He added that the agreement with UL has “written into it” that an exhibition will come back to Cashel.

“Hopefully it will generate more interest in the books that are here in this magnificent collection,” he said.

He paid tribute to his predecessor, Dean Philip Knowles, who spent so much time fundraising for the upkeep of the library.

Also at the announcement was Director of Services with Tipperary County Council, Sean Keating. The council are supporting this agreement. He said they were anxious to keep an exhibition in Cashel and are prepared to provide a place for that. They are working with other groups to figure out how to do that. It is planned to link the interactive exhibition to the Rock of Cashel to attract tourists.

What Mr Bergin called “a new beginning”for the books will begin in the coming weeks with the transport, by a specialised company, of the books, wrapped in acid-free tissue and bubble wrap, to UL. An expert from the University of Ulster has also been consulted for advice. Over 12 months the level of humidity for the books will be brought from 80% to 50%. Insect infestation will be treated by deep freezing.

There are more than 8,000 books in the library but many contain more than one title, so it is estimated there are up to 11,500 titles stored there.

Some of the library's most famous works include fragments from the first printing press of William Caxton in the 1400s; the 1632 account of his time in the 'new world' by Captain John Smith, Governor of Virginia, which includes the stories of Pocahontas; Isaac Newton's 'Principia Mathematica' generally regarded as the greatest work in the history of science; an early edition of Dante's 'Divine Comedy' printed in 1512; it also includes first editions of Machiavelli's 'The Prince' and Cervantes 'Don Quixote' as well as hand-painted manuscripts that date back to before the invention of the printing press and important early volumes on Irish history.

The books in the library were bequeathed to the clergy of the Cashel diocese by Archbishop Theophilus Bolton, Archbishop of Cashel from 1730 to 1744. The books were collected by the archbishop then housed since 1836 in the Chapter House on the grounds of the Cathedral Church on John Street, Cashel.

“I know this is difficult,” Mr Bergin said, “but I can't see any other solution. This is an absolute crisis.”