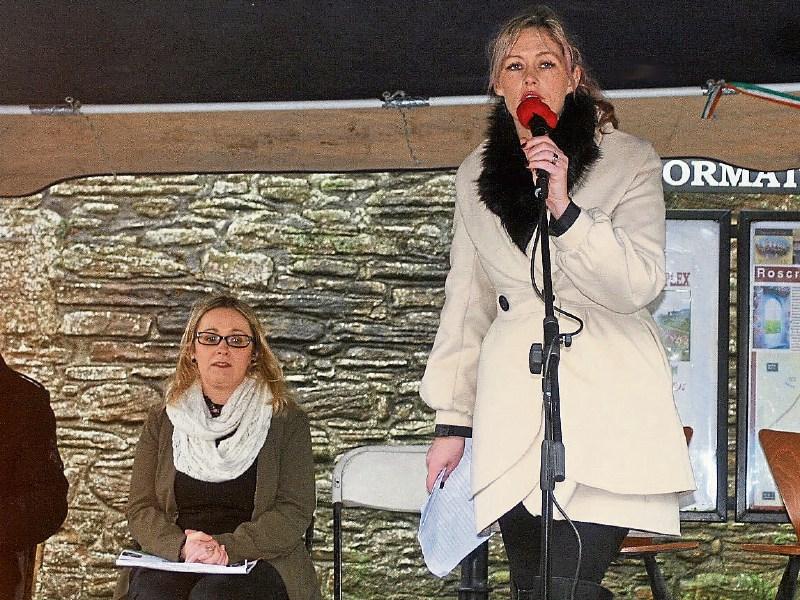 The all-county event, had Carrick-on-Suir Republican flute band providing marching music, and attendance from every Sinn Féin cumann in Tipperary.

Guest speaker was Cllr Toireasa Ferris of Kerry, daughter of Martin Ferris TD. She addressed her oration in recognition of those executed in Roscrea, to a comparison between their sacrifice and attitudes common in Ireland today.

Referencing the execution of the four men during the Irish Civil War, Cllr Ferris said: “The saddest part of any nation's history is when the people themselves turn on one another. The aspect of our Nation's history I find most difficult to read are the accounts of what happened during the Civil War in this state, when former comrades and family members committed horrendous acts against one another. The oppressed became the oppressors. Here four men were shot to death by a firing squad. The dignity shown by these men in the face of execution is remarkable, asking their families to forgive their betrayal by fellow Irish men.”

“To our shame, 100 years after the Proclamation we have yet – and I include every single one of us – we have yet to realise the aspirations of that visionary document. While we are no longer engaged in gun-battles with one another, the division and cruelty towards one another still continues, just less obviously. Deliberate obstruction of opportunity has detained generations of families in the trap that is poverty.”

“Each sector of our society is caught up in its own lives and challenges, and we are resentful of any benefit offered even to those less fortunate than us. How long more must we witness families and young children living in hotel rooms and hostels without a home to call their own? We hear people from the comfort and warmth of their own home bemoan the cost of housing such families in flea- and mouse-ridden hostels.”

“How much longer will people from families having had the benefit of education for generations, complain that those who have not are getting an 'unfair advantage'? Thomas Davis 150 years ago urged the Irish people: 'educate that you may be free'. He knew that education lifts people from poverty, opens the door of opportunity, and lays the foundations for a better life. 60 years later Pearse attacked the British education system as 'the murder machine' and wrote how education can enrich all of our lives.”

“Yet today we have an educational system that favours those from more privileged backgrounds, many of whom are content to retain their unfair advantage. And ironically it is those who availed from the best education that led this country to its knees.

“How long more will working people allow themselves to be divided, and manipulated, so they don't stand together to ensure we all have a better quality of life?”