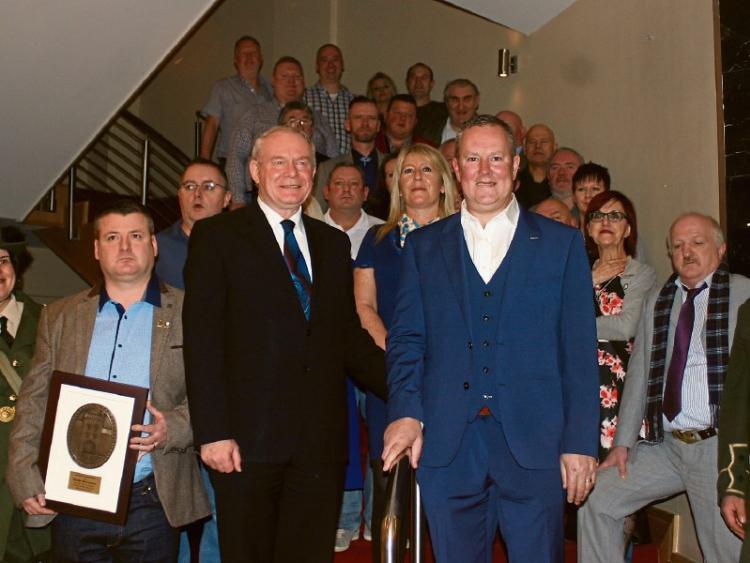 Northern Ireland Deputy First Minister Martin McGuinness hammered home the message during his visit to Clonmel last Friday that if Sinn Fein can share power with the DUP in the North then southern political parties will have to also put the past behind them and work with his party in government.

Mr McGuinness came to Clonmel to officially launch Tipperary Sinn Fein candidate Cllr Seamie Morris' general election campaign at the Clonmel Park Hotel. The event was attended by close to 200 Sinn Fein activitists and supporters, many of whom travelled from Cllr Morris' home base of Nenagh for the occasion.

In media interviews and in his campaign launch speech, he highlighted the good working relationships and friendships he forged with the North's former First Ministers DUP leaders Ian Paisley and Peter Robinson in the powersharing arrangements at Stormont.

He said during the time he worked in government with both DUP leaders there was never one word of recrimination between them. "And God knows there was enough on each side to recriminate about," he remarked

Responding to Fine Gael, Labour and Fianna Fail ruling out doing a coalition deal with Sinn Fein, he said he listened to politicians in the Dail talking about not wanting to go into government with Sinn Fein and the recriminations about the past and he felt there was a lesson to be learned in this part of the country from their experience in the North given all they had gone through there.

It was put to Mr McGuinness that some political commentators regarded Sinn Fein leader Gerry Adams refusal to enter into any coalition deal with Independent Tipperary TD Michael Lowry after the election as hypocritical in view of the support the party has given to Thomas "Slab" Murphy, who has been convicted of tax evasion. Mr McGuinness responded he didn't think Mr Lowry was going to be the deciding factor in the formation of the next government.

"When the election is over the people will see a very changed political landscape because of the rise of Sinn Fein. Whatever people say prior to the election about who they will do deals with, at the end of the day, the pressure will come from the people of Ireland around the formation of the next government and we certainly expect we will be in the mix for that and are prepared to use our mandate in the interests of the people of this island. So it's all to play for."

Cllr Seamie Morris responded that the national media were falling over themselves to complain about Thomas Murphy and Sinn Fein's support for him and yet bankers, developers and politicans who caused the economic crash had faced no jail sentences.

In his campaign launch speech, Cllr Morris said they had a genuine opportunity to elect the first Sinn Fein candidate to the Dail in Tipperary in 98 years.

He outlined that he was first elected to Nenagh Town Council in 2004 and has contested two previous elections for the party in the old North Tipperary constituency and managed to increase the Sinn Fein vote on each occasion.

Mr Morris said he was proud of his record of standing up for ordinary people who had been hardest hit by cuts imposed by the last two governments. He declared he had never been afraid to take on the establishment and the auction politics and cronyism of Fianna Fail, Fine Gael and Labour.