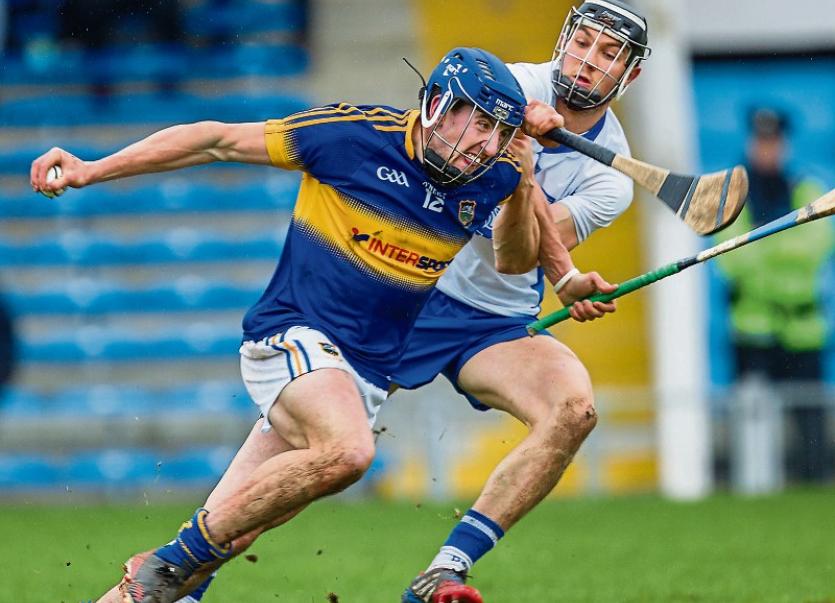 Austin Gleeson's point from an injury time free from well inside his own half condemned Tipperary to a second successive defeat in Sunday's National Hurling League game against Waterford at Semple Stadium.

He was helped by the absence of any breeze but Gleeson's score, a monster effort from all of 95 yards, was worthy of winning any match.

And so Tipperary again lose out in a close finish and fail to sign, seal and deliver a victory that was well within their compass.

Of more immediate concern is that this result means that another defeat in Sunday's game against Galway in Salthill will plunge them into a relegation dogfight and drag them into an unwanted battle to preserve their top flight status.

Manager Michael Ryan was correct in his assessment that this was a game that could have gone either way, and his side appeared to have timed a winning run to perfection when they found the net with two minutes of normal time remaining.

They were two points behind when John McGrath collected substitute Kieran Bergin's handpass and shot low to the corner of the goal. They had a chance to increase that advantage but a '65 from John Bubbles O'Dwyer fell short and was cleared. Instead Waterford levelled the scores for a third and final time from Patrick Curran's free, as this close and exciting encounter entered the first of three minutes of additional time.

The dice rolled in Waterford's favour in a delicately-poised finale. Goalscorer Tom Devine was off-target from a shot at the posts but Austin Gleeson made no mistake from that late free to earn his team a win that manager Derek McGrath described as very satisfying, after a match that he said had a championship feel to its closing moments.

Waterford's Philip Mahony may have made the most of the opportunity to earn the free but there was no denying the greatness of Gleeson's score.

Holders Waterford are the clear leaders of Division 1A after beating Kilkenny, Cork and Tipp in their opening three matches, as their unbeaten run in this competition has now been extended to ten matches.

The situation in Tipperary isn't as encouraging. Once again they flattered to deceive and a failure to close out victories, which also proved their downfall in Nowlan Park a fortnight previously, is becoming a worrying habit.

The attendance of 6,540 might never have witnessed such a close finish had Tipperary made the most of two more gilt-edged opportunities for goals. On a raw, damp day in Thurles they were a point ahead two minutes before half time when Padraic Maher's delivery broke kindly for Patrick Bonner Maher who galloped clear, only to see his shot deflected by an acrobatic save from Stephen O'Keeffe, although Bonner's shot was just the right height for the Waterford goalie.

Tipp were again a point clear twelve minutes from the end when substitute Niall O'Meara gathered Darren Gleeson's free but he blazed a low strike across the face of the goal and wide.

A minute later Tom Devine showed Tipp how it was done when he fastened onto Philip Mahony's clearance and steamed in from the left wing, leaving Tomás Hamill and Ronan Maher floundering in his wake before rifling a shot past Darren Gleeson.

Waterford seized the initiative with that goal, which put them in front for the first time since the opening minute. Tipp regained control with John McGrath's goal, only to lose it again in that gripping finale.

Tipp went 18 minutes without a score in the second half and it could be argued that this barren spell, as much as the missed chances for goals, was where they lost the game. They were ahead at the midway stage by 0-12 to 0-8, with Waterford's Jamie Barron reducing the deficit shortly after the resumption. However Tipp were the better team in the early second half exchanges, as they were towards the end of the opening half, and after three wides they eventually hit the target when Noel McGrath scored six minutes into the new half.

They went five points clear when Bubbles O'Dwyer converted a '65 in the 43rd minute but for some reason their momentum stalled after that. The outstanding Patrick Curran had three points (one from play, two from frees) without reply for Waterford and when Kevin Moran had another in the 50th minute they were only one behind and right back in contention.

Tom Devine had found the net as Waterfordf struck an unanswered 1-4 and Tipp were chasing the game by the time they had their next score, from Bubbles O'Dwyer's free nine minutes from the end of normal time. The Killenaule player, who finished with 11 points, was one of his team's best performers, although he was fortunate not to receive a red card instead of a yellow for a reckless pull across Jake Dillon's legs in the 19th minute in one of the many rucks that developed on a difficult, sticky surface.

Bubbles was often forced to plough a lone furrow in an attack that sorely missed Seamus Callanan who, having recovered from a broken thumb, was ruled out with a hamstring injury. John McGrath started brightly with a couple of points and while he faded as the game progressed he popped up with that late goal.

Captain Brendan Maher and Michael Breen provided Tipp with plenty of momentum from midfield, with each making an impression on the scoreboard. Michael Cahill and Barry Heffernan had their moments in defence, as did Tomás Hamill and Ronan Maher, although the latter pair were badly caught for Waterford's goal.After an indifferent opening half Padraic Maher improved on the turnover.

Kieran Bergin made a welcome return from injury, winning possession and providing the assist for John McGrath's goal.

Waterford will be looking to make it four wins from four when they entertain Dublin in Walsh Park on Sunday. Aside from Austin Gleeson, Patrick Curran and Stephen O'Keeffe they also had sturdy performances from Shane Bennett, Darragh Fives, Philip Mahony and Kevin Moran last weekend.