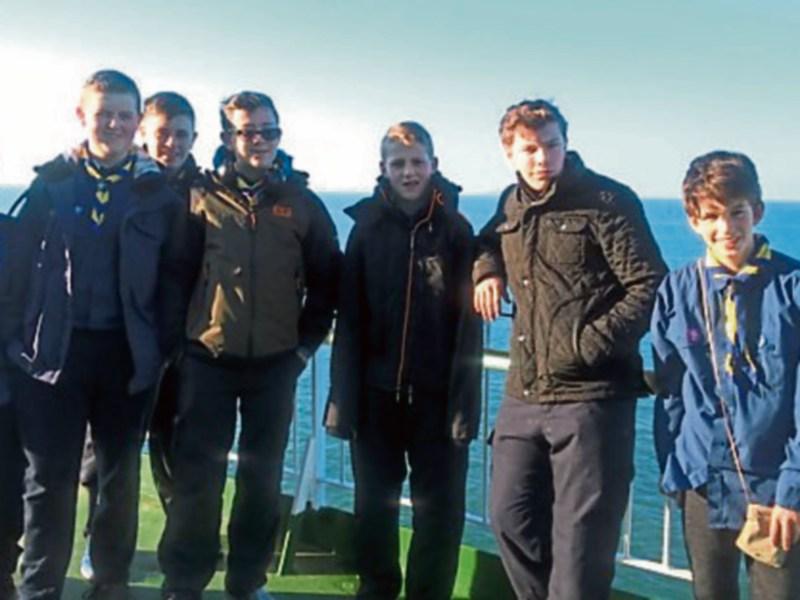 In their first trip abroad for over forty years, Thurles Scouts travelled to Conwy in north Wales for St. Patrick’s weekend. A packed programme of activities culminated in an evening with a local Scout Group where Thurles Scouts presented a signed Irish tricolour to the Welsh Scouts.

The excitement started early, when a medical emergency on the ferry required the Irish Coast Guard helicopter. Passengers watched as the helicopter hovered above the moving ship, while its crew winched the patient onto the helicopter before flying off.

The town of Conwy is famous for its intact medieval town walls, and the smallest house in Britain, as well as its magnificent castle.

On our arrival, Ben from the hostel staff greeted us in the dining room, decorated with tricolour bunting, and presented us with a St Patrick’s Day card to mark the day!

Friday began with a hike up a mountain directly above the town. We hiked with the mountains on our left, and the sea on our right. Along the way we saw wild horses, mining ruins, and a group of climbers practising their abseiling skills on a sheer rock face.

Back at the hostel, the scouts split into patrols for a challenge: using a limited set of materials, each patrol had to build a vessel in which to drop a raw egg onto concrete without breaking it. The vessels were tested on Saturday morning, each team launching their vessel from the balcony. Some of the eggs made it; some didn’t!

The youngest team of four Cubs produced the most elegant vessel, with a big parachute that gently landed with its egg intact!

Things got more intense with circuits of a timber-built assault course. First the teams had to complete the course while helping each other but without speaking (under threat of having lunch confiscated!) and then while carrying, but not spilling, a pint of water.

Just to make it even harder, one of our Scout Leaders did his best to distract the teams from their task, with limited success but plenty of laughs. This was followed by a series of outdoor team challenges before the tired and muddy scouts took a break at last.

But not for long, as we then brought them to an orienteering course. Orienteering is a powerful exercise in our scouts’ navigation skills, and all six teams successfully completed their courses in the time allowed. Before we left the park, Ben showed us the town’s World War One memorial and told us of his great-grandfather’s service in that dreadful war. The base of the memorial was dressed with poppies and small mementoes from families still remembering their fallen ancestors.

Back at the hostel, the scouts were again challenged, this time to build a ‘bottle rocket’. These too had to land with an intact egg (eggs lead short, brutal lives in Wales it seems). In the hostel garden, the finished rockets were pumped up and blasted to extraordinary heights.

Many eggs perished in the cause of science, to the delight of the competing teams, but a lucky few made it back to Earth unbroken. One excited child was so taken by this event that he quickly went online and ordered his own pump kit to build and launch rockets at home!

This was the last evening of our trip, and we went to visit the local Scout Group. The Irish and Welsh Scouts were excited to meet each other, and played some hectic, ingenious games that we plan to enjoy again at home.

At evening’s end, we presented the Welsh Scout group leader with an Irish tricolour, signed by each of our group, and a neckerchief in the Tipperary colours.

Finally, on Sunday we headed home, but made time to visit a Nature Park, a beautiful seaside location with cliffs and mining ruins to explore.

An uneventful ferry trip later, we found ourselves back in Dublin. All the scouts had earned badges during this adventure, some earning as many as three.

Thurles Scouts had been abroad for the first time since 1976: but it won’t be so long before we do it again!