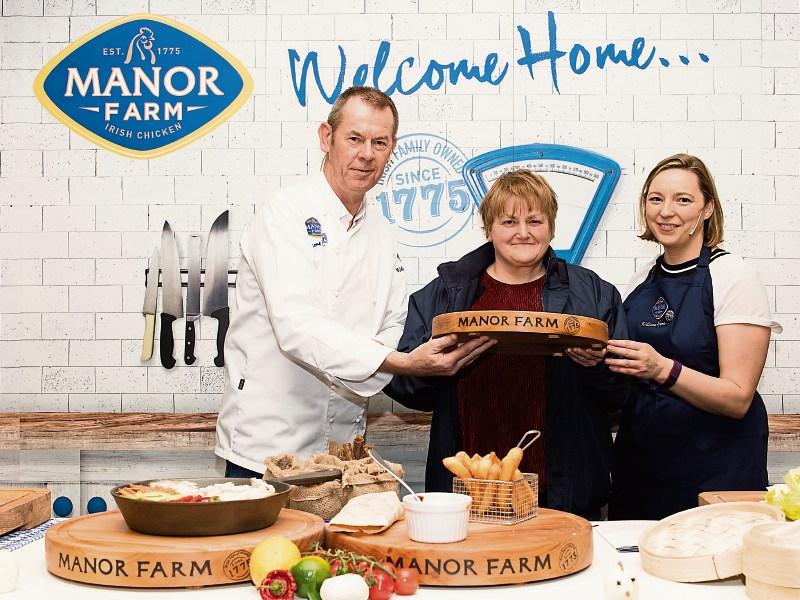 Over 250 ICA members from all parts of Counties Tipperary, Waterford and North Cork enjoyed an evening with Manor Farm at the Cahir House Hotel on Wednesday 20th April.

In the course of an entertaining evening Manor Farm's team of Shay O'Connor, Marie Doyle and Brendan Nolan demonstrated some really interesting ways to cook and present Manor Farm chicken and passed on some useful advice about preparing and cooking delicious chicken meals. During the event prizes were won by; Peggy Kelly, Ballingeary ICA Guild Tipperary, Mary Corcoran, Golden - Kilfeacle ICA Guild, Mary O'Connor, Killenaule. Annette Williams, Rathkeevin, Clonmel and Ann Lonergan of Carrick-on-Suir ICA joined Shay and Marie to prepare some delicious chicken goujons. A great night and some sumptuous chicken was shared by all.

Members of the audience were invited onstage to participate in the food preparations. Nutrition and the Food Pyramid for healthy eating were explained. The Mediterranian Diet was encouraged for better health. There were Manor Farm Goodies Shopping Bags for everyone in the audience! This not-to-be-missed Fundraiser for the Association is being run Nationwide so in the interests of the ICA please support it your area.

It was great to see a bus load from the Tramore area in Cahir. Manor Farms are now supplying the big stores with 'Cook in the Bag' chickens & the audience were encouraged to request their local butchers to stock them, as they cook fast for the busy housewife. For the smaller family a half-size can be had.

ICA would like to express their gratitude to David Walsh & his efficient staff for catering for such a large attendance and for their co-operation with the Demonstrators.