Presentation Thurles is the toast of the Bord Gais Theatre 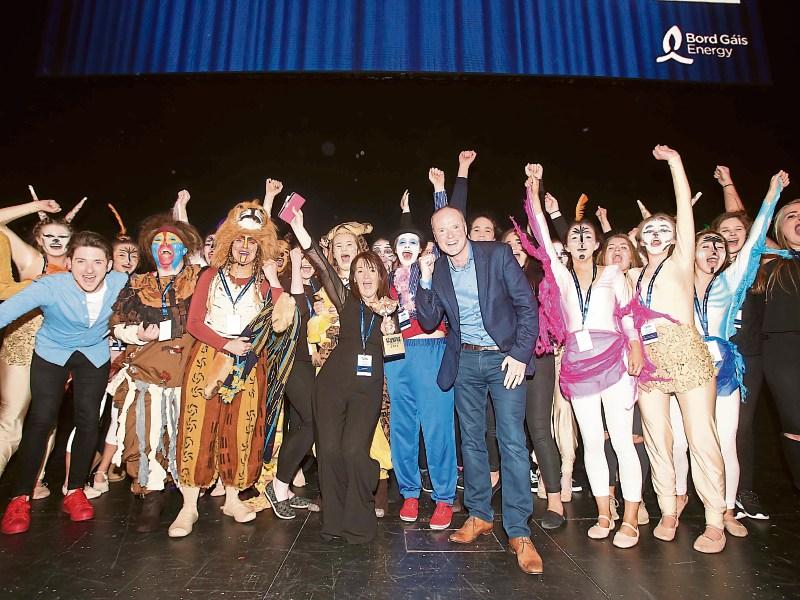 Over the decades there has been a strong tradition of staging musicals in Presentation Secondary School, Thurles.

In fact, when students reminisce on their school days, their main memories often focus on the excitement of the shows, the fun of the rehearsals, the nervousness of the first performance and the sadness when the curtains close on the final night. Mrs. Pauline Dwan, ( Director/ Producer,) and Margaret Butler Doyle, (Musical Director), worked together for many years with numerous casts of talented students to earn the school a wonderful reputation for shows of the highest standards.

The current production team is comprised of terrific talent from within the teaching staff, namely Trisha McElgunn, Brid Wallace, Edel Harding, Eimear Harrold, Marie Kennedy, Deborah Harty, Mairead Hackett, the Home Economics teachers and a host of hard-working teachers, who work voluntarily to help bring school musicals to a whole new level. Well, those levels have been well and truly smashed now with a new summit having been reached. The Lion King was a truly magnificent production and has been acknowledged as such by all.

May 5th will be forever etched in the minds of the Presentation School Community. On this day the school travelled to Dublin to perform the opening scene of The Lion King in the Bord Gais theatre. When the school received the news that they were shortlisted for “The Best School Musical Award” the entire school community was ecstatic! The cast and production team travelled to Bord Gais on April 6th to practice for the upcoming event. It was then the school realised what they had achieved. Win or lose-this was a moment to be cherished! Bord Gais funded a workshop for the four schools shortlisted and a member of their staff visited the school on April 25th to facilitate a workshop on music, song and dance.

There were 13 cateogories with 64 schools shortlisted. The judges spent six days looking at the DVDs of all the shows (250 in all). Bord Gais have organised the Bord Gais Energy Student Theatre Awards for the last two years. The Presentation figured each year. In year one Enya O'Connell Hussey’s account of the school show “Cats” was shortlisted for Best Dramatic Critique and the school’s drama group “You, me and Mrs. Jones” was shortlisted for Best Overall School Play in year two.

This time round the cast of “The Lion King” had to perform a number on stage as selected by the judges. The Presentation performed the opening scene “ The Circle of Life”. The standard was amazing as stated by Dave Kirwan Managing Director of Bord Gais.

When the Pres students came on stage in their colourful costumes, faces painted and singing the Circle of Life, the reaction was instant -cheers and applause were immediate! The audience loved it.

The judges selected the Presentation Show because of the incredible talent displayed, the high standard of performance throughout the entire show, the colours displayed in costumes and set, the high musical quality and evidence of excellent teamwork. When the presenters announced the Presentation as the Winners of the The Best School Musical in Ireland, the theatre erupted. Parents, teachers and students jumped to their feet to acknowledge the wonderful achievement. The President‘s wife, Sabina Higgins, congratulated the production team and the cast and there have been already 20,000 hits on Facebook !