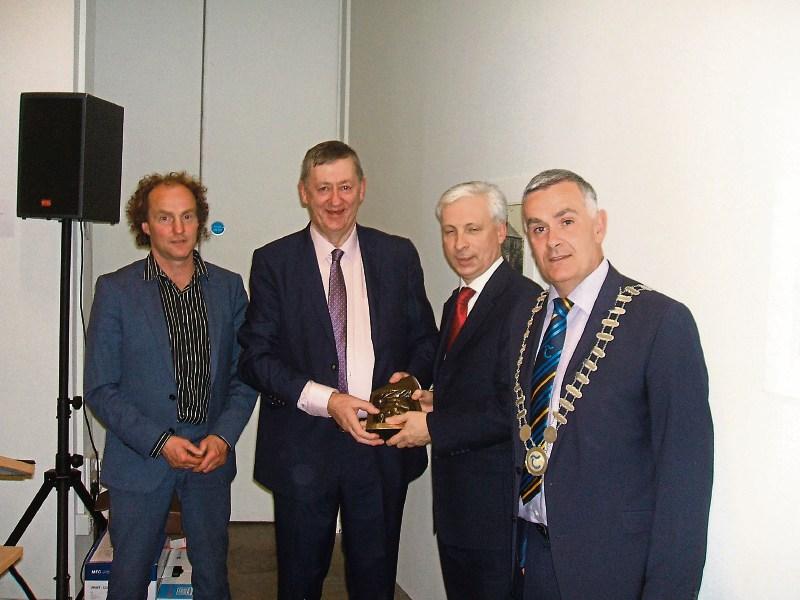 In many ways in was hard to watch retiring former Thurles Town Clerk and Municipal Administrator Michael Ryan sitting back and not running the show as he has been doing for four decades in The Cathedral Town.

This time, the occasion of his parting farewell from a vocation to which he was totally committed, Michael Ryan was the subject of all the commentary, the platitudes, the butt of the humour, and the reason such a large gathering had assembled at The Source in Thurles on a beautiful Friday evening.

It was entirely fitting that the Source be chosen for the venue giving that it is right in the heart of a civic plaza incorporating the swimming pool, threatre, library and the recently opened town park - all projects to which Michael Ryan was central during his time as Town Clerk of Thurles Town Council.

Colleagues, former and current, turned out in droves alongside community leaders and friends, to join Michael and his familyon what was a very special evening, a trip down memory lane, a lament for the institution of the Town Council, and an opportunity to simply say thanks to 'The Clerk' as he will forever be known in and around Thurles.

This time the role of Master of Ceremonies fell to Michaels colleague and friend, Mr Matt Shortt, and he led the tributes alongside the likes of Councillor Seamus Hanafin, Chairman of Tipperary County Council; Councillor John Hogan, Chairman of the Municpal District; and Joe MacGrath, Chief Executive Officer of Tipperary County Council. There were many other contributions also with all speakers lauding the efforts of Michael Ryan over the decades, his dedication to ensuring that the best for Thurles town was always sought, his sense of humanity and generosity of spirit, and his ability to get things done, despite challenging budgetary contraints.

In many ways, Michael was old school in his thinking and in the way he ran the Town Council and later on, the District. But, that didn't mean that he he didn't embrace change - it simply meant that he carried the same principles as engendered in the 'old school' through to the more regimental and sometimes inflexible system of modern governance.

“I found out from an early stage that the best form of action was to keep your mouth shut and listen,” Michael said as he outlined the many highlights of his career in office in Thurles including the All-Ireland Final in 1984, the Feile concerts, welcome of the Presidents and Taoiseach John Bruton, Salt Late friendship pact, Thurles Town of Sport status and many more.

He also highlighted the many projects undertaken in the town and was particularly pleased to see former Councillors Martin Ryan and Antoin O'Briain in attendance - they were both council members when he arrived in Thurles as Town Clerk on March 1st 1977.

There were also a few parting messages from Michael - he regrets greatly the abolition of the Town Councils, and states very matter of factly that the solution to the housing crisis is very simple - build houses. That's Michael for you - direct and to the point.

Michael Ryan will be remembered in Thurles for his efficiency, honesty, dedication to the posts he held, and his understanding of local government. He will also be remembered for his humour and his sense of fun. To paraphrase Othello ( or Charles J Haughey for that matter) - 'he did the town some service.' Great service in fact.