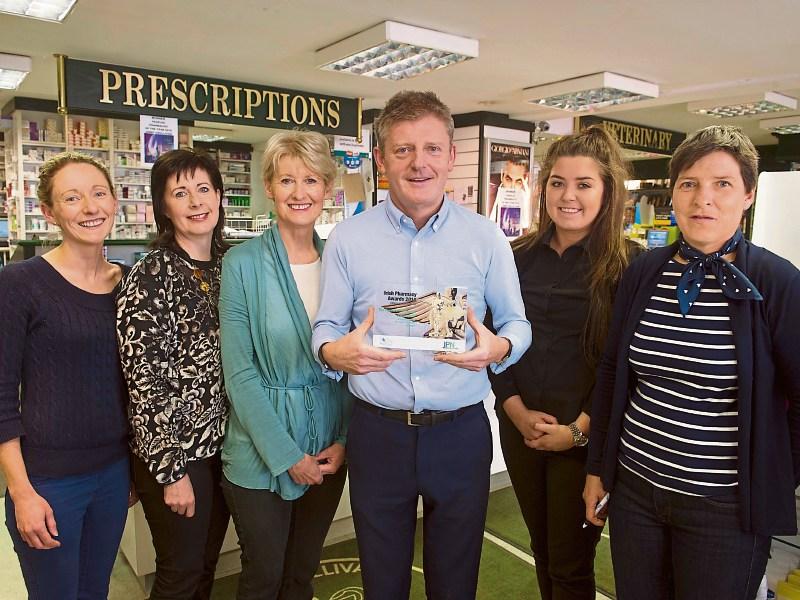 A third generation Tipperary pharmacist has scooped one of the industry’s top awards.

And adding to the significance of Jimmy O’Sullivan's win is that his own customers played a huge part in the success.

The Fethard man won the Cliona’s Foundation People’s Pharmacist of the Year.

He was in the original top two hundred listed for the award and then shortlisted in t he final six.

Votes were cast online, by email and by voting slips in the nominated pharmacies.

And Jimmy's supporters, describing him as someone who puts his customers first and often going above and beyond the call of duty, responded in huge numbers.

At a gala presentation ceremony in Dublin, he was announced as the winner of the prestigious award, organised by the industry publication Irish Pharmacy News.

And there is a touching connection between his original nomination and the sponsors of the award.

He was nominated by Tricia Doyle and Michael O'Brien from Cloneen, whose daughter Bianca is bravely battling leukemia.

Tricia and Michael were so grateful to Jimmy and his staff at the Main Street outlet in Fethard for his care and attention to Bianca's needs when diagnosed with the serious illness.

It was appropriate then that Jimmy was named the Cliona's People's Pharmacist of the Year as the award is named after another brave young girl, Cliona Ring, who sadly died from her illness.

Her parents Terry and Brendan remember Cliona through the Cliona Foundation that raises funds to help families meet the cost of expensive hospital care fo r sick children. To date it has raised over €1m.

“I am delighted to win an award that honours such a deserving cause”, said the Fethard man.

“We don't do it for recogntion but I am delighted for my staff and for Fethard - a town that certainly punches above its weight, especially this year with Mouse Morris's success in the Irish and Aintree Grand Nationals”.

“And I am also delighted that Bianca is doing so well at the moment and getting ready to make his First Communion.

“That is great news”, he said.

He added - “The award was presented by TV3's Colette Fitzpatrick, who is from Holycross, and as I said when I received the award, I was doing so on behalf of my staff who deserve a huge amount of thanks”.

Jimmy and his wife Fionnuala are continuing a family business started by his grandfather James ninety nine years ago, in 1917, and continued by his father Donal.

And a fourth generation appears likely with son Jack just qualified as a pharmacist and another son Matt doing his final exams.

Daugher Evie is a qualified radiographer.