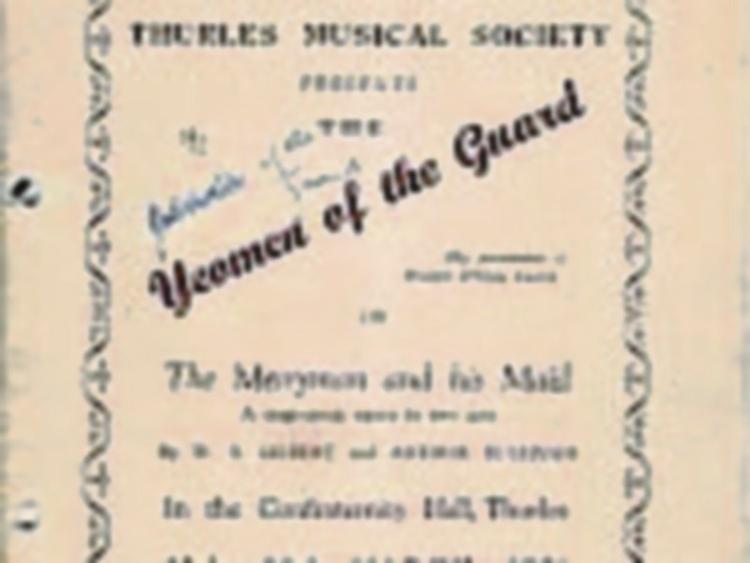 Members of Thurles Musical Society have been left perplexed following the discovery of an original programme of their very first show back in 1951.

The historic Yeomen of the Guard programme - the brilliant Gilbert and Sullivan classic - was discovered in a house in Portland, Oregon amongst a box of records and tapes which were left in the house by a previous owner.

And, the current owners father, who resides in Rossesspoint, County Sligo contacted Thurles Musical Society, outlining the details of the discovery and offered to return the publication to the Society for the archives.

The programme ( pictured above) is a rare document with very few remaining. In fact, Thurles Musical Society is aware of only a handful, including their own archives, still in circulation.

The show was staged in The Confraternity Hall between March 11-18th and was Directed by Mr H St J Glynn. Mai Noonan, a future Honorary Life Member, was the Musical Director and the conductor of the orchestra was Robert O'Connell.

Among those who featured on stage included: Denis Dwan, Willie Moroney, Willie O'Dwyer, Tom Mason, John Lambe, Rita Dwan, David Butler and Sydney Collier. The show proved to be an outstanding success and has paved the way for musical theatre in The Cathedral Town each year since - a history charted in the publication a short time ago of 'From Stage to Page - a History of Thurles Musical Society', which is still available for anyone interested in acquiring a copy.

“We are intrigued to know how a copy of this programme turned up in Portland. Mr Joe Burgess contacted me having looked up our Society on the website, and informed me that his daughter had come across the programme amongst a box of records and LP's when she was clearing through a house she had just moved into it. Obviously, whoever had lived there previously thought enough of the show, or somebody in it, to hold onto the programme. We would love to find out who that was and would be delighted with any help from the general public in this regard,” current TMSChairman Jack Gleeson told The Tipperary Star.

Thurles Musical Society is still working on a show for the 2017 season with the rights for the proposed Witches of Eastwick having been withdrawn. So, watch this space for further news on the show for the new season.

In the meantime, any help available in solving the mystery of the Yeomen of the Guard programme would be appreciated. Perhaps you know of some connection - if so, please make contact.