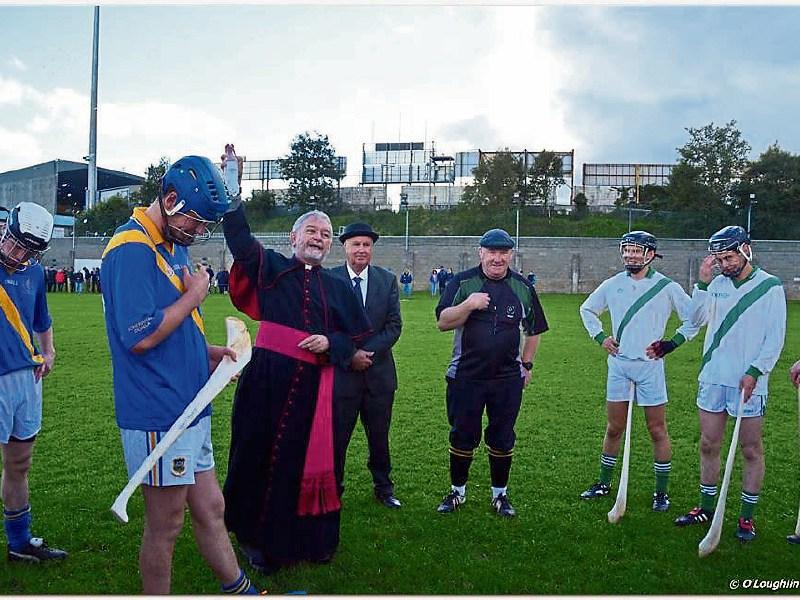 The Thurles Sports Festival commenced in marvellous style with a massive crowd turning out for the re-enactment of the 1916 All-Ireland final which took place on Friday July 1st.

This event started with a parade from Lar Na Pairce to the Thurles Sarsfields Outside field in the shadows of Semple Stadium. The two teams were lead by the Sean Treacy Pipe Band, two vintage cars and of course Tipperary Rose Fiona O Sullivan on horseback.

Upon arrival to Thurles Sarsfields Siobhan Ambrose spoke on behalf of Tipperary County Council. The under 12 teams of Boherlahan and Tullaroan took part in a challenge match to get the action on the field underway. This was a real treat for all the spectators and it was great to see the stars of the future take part in this special event. Before Archbishop Kieran O Reilly blessed the teams and threw in the ball, faith of our father and The National Anthem were performed by Peter Lanigan which really added to the occasion.

The two teams of Boherlahan and Tullaroan are to be commended on the performance they gave on the field and the skill of the players was very evident with the use of the old style caman. Each player also had the honour of keeping the hurley they played with as a souvenir of this historical occasion. Afterwards in the Thurles Sarsfields Centre Tom Noone put the match into context by describing the cultural context of the time, Sarsfields Chairman Michael Maher welcomed all on behalf of Sarsfields, Committee Chairman Jim Ryan Thanked all those who attended this event whilst John Kennedy represented Lit as a main sponsor and stated that the college was delighted to be associated with the festival.

The organising committee would like to thank all those who helped to make this event possible and all those all those spectators who attended - some came from as far as New York to be present . This was a great occasion for Thurles and the committee was delighted to do their bit to remember 1916.

And Remember Thurles Sports Fest is not over yet. If you're free on Friday evening at 7pm why not attend a polocrosse game at LIT, Thurles and for all those music lovers The Garth Brooks experience will perform in the Premier Hall on Saturday 9th July with Doors opening at 9pm. Tickets are only 10 euro and available from Bookworm and can also be purchased on the door. Also the Semple Cup Tournament takes place in Dr Morris Park and The Outside Field on Saturday from 10:00am. For full details on all the remaining events check out the website at www.thurlessportsfest.com