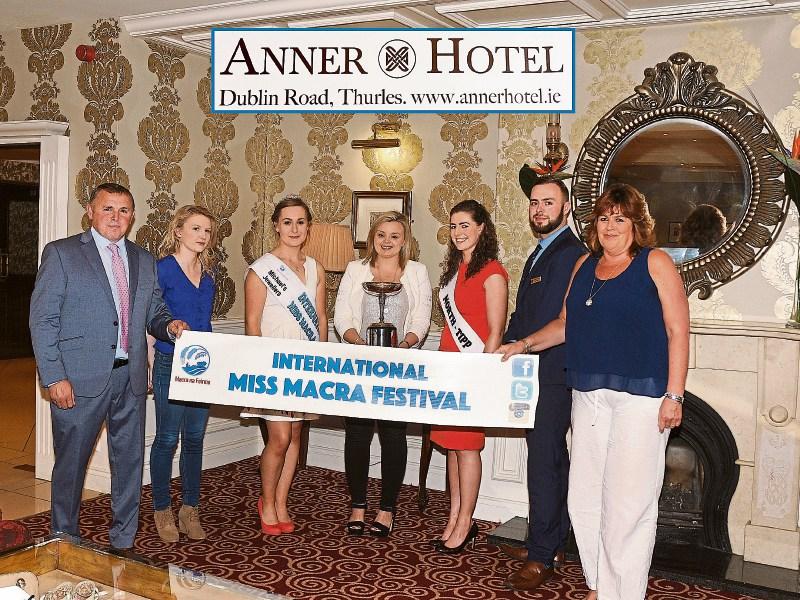 Do you remember the days watching the International Miss Macra Contestants parade around Liberty Square in Thurles?

Many Macra na Feirme members and supporters would travel to Thurles from all corners of Ireland for the International Miss Macra Festival held over the August Bank Holiday Weekend? Did you think, perhaps, that those days would remain a distant memory? Fear not, as you will have the chance to relive these glorious days as this year heralds the return of the International Miss Macra Festival to Thurles.

The 2016 International Miss Macra Festival will take place over the August Bank Holiday weekend, from Friday the 29th of July to Monday the 1st August, here in Thurles.

This will be the Festival's 45th year and is an exceptional representation of what just one voluntary, rural, social organisation can achieve; through hard work, determination and the full support of its local community, especially the host families who welcome contestants into their homes year after year.

Such is the high calibre of the venues in Thurles that the festival this year will take place in three separate venues as we showcase the best that Thurles, Co. Tipperary has to offer: Hayes Hotel, the birthplace of the GAA, on Friday night, The Dome, Semple Stadium, on Saturday and the magnificent family-run Anner Hotel on Sunday night.

This year welcomes the support of The Anner Hotel, Conference and Leisure Centre, which has recently been awarded 4 stars by Fáilte Ireland, as the primary location for this year’s ‘welcome reception, private interviews and gala banquet’. It will be a truly beautiful location, it being situated on private grounds with manicured gardens. The Anner is owned and run by the Maher brothers, who are lifelong supporters of Macra na Feirme and they can be thanked for facilitating the festival’s return to Thurles.

This year will see young ladies travelling from all over Ireland and abroad, in the hope of following in the footsteps of last year’s winner, Miss Susan Willis (Co. Carlow); in being crowned International Miss Macra 2016.

The Friday night will be comprised of a ‘90’s Themed Disco’ in the historic Hayes Hotel, Thurles, for this most enjoyable of events. Hayes Hotel, recently re-opened under new management, is ideally situated for this disco in the centre of Thurles on Liberty Square.

Saturday morning heralds an intense day for the contestants, as they must rise early and prepare for their private interviews in front of a 3-person judging panel. This panel has been given the difficult task of selecting just one girl from the many contestants; the winner to be crowned “International Miss Macra 2016”.

The judges for the 2016 competition this year are Joan Pollard Carew, Geraldine Henchion and Declan Ryan. Joan Pollard Carew is representing Michael Carew Jewellers, Friar Street, Thurles, the main sponsor of the festival. Not only is Joan’s husband the main sponsor of the festival but Joan is herself a published poetess and well known nationally in Irish Art and Irish Dancing circles. Joan and her husband also contribute greatly to the festival in terms of invaluable support, time and advice. Geraldine Henchion, known for her work with Tipp FM, Tipperary’s No. 1 Local Radio Station makes her debut on the judging panel. Geraldine is also well known in art circles and is very involved in drama societies. Declan Ryan, who has held every known post of responsibility on the International Miss Macra Festival committee and also currently holds the title of President of the Clonoulty/Rossmore Macra club, completes the committee.

Saturday evening’s Cabaret will occur in the Dome, Semple Stadium, Thurles, where the contestants will be interviewed on stage two at a time by interviewer Mr Mike Egan, himself a previous Macra member and a long-term friend of the festival. This year the interviews will be followed by live music from ‘Switch’.

Sunday morning starts with the contestants attending Mass at Clonoulty Parish Church. The contestants then take part in a family fun field day, in the Clonoulty G.A.A grounds followed by a barbecue, weather permitting, which will be cooked by local butcher Joe Hammersley.

Sunday night is the International Miss Macra Gala Banquet in the Anner Hotel; the highlight of the Festival. Macra and non-Macra members will all sit down to enjoy a delicious five course meal after a champagne reception. The meal will be followed by various speeches, live music by “Silver Dollar” and dancing. At the enchanting hour of 12.00 midnight, silence will descend on the Anner ballroom as anticipation reaches climax point; when the winner of the 2016 International Miss Macra Festival will be crowned.

If you require any further details regarding what is guaranteed to be an unforgettable weekend or if would like to book tickets you can contact Anne Marie Lyng (Festival Chairperson), on Mobile (087)1339602. So don’t delay, book your weekend ticket, pack your dancing shoes and hit the road to Thurles, this August Bank Holiday weekend.