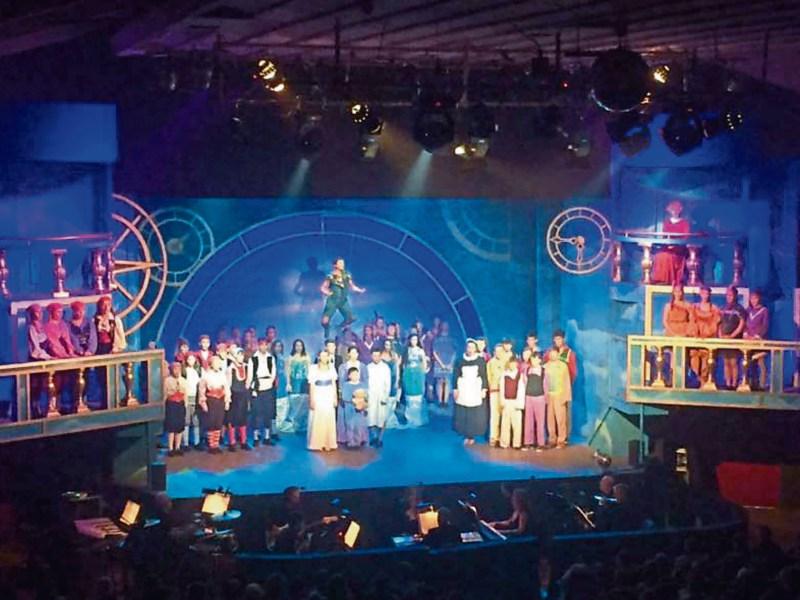 Peter Pan wasn't the only one in flying form in Thurles last week following Phoenix Productions four night run of the hit musical which left audiences in a truly elevated state of excitement at what they had just witnessed in The Premier Hall.

One wondered in advance how Peter would fly, but not only did Peter manage to levitate, so too did the Darling children in a spectacular scene which had them crossing over and back the stage.

This was just one of the many highlights of a magnificent show which had top class performers trodding the boards of the famous old theatre. And the entire Production Team led by Eoin Cannon, David Wray, Debbie Kiernan, John O'Donoghue, Mary Rose McNally, Allan Butler and Gerard O'Brien ensured that the very best was gotten out of the sixty strong cast with lashings of colour, sharp choreography, harmonious singing and of course great comedy bringing the story of Peter Pan alive.

It's hard to credit that those on stage are of such tender years - from 2nd class in primary school, right up to late teens. The confidence and stagecraft displayed comes from hours of rehearsals and when the audience gets to see the polished and pristine production, they appreciate the hard work and marvel at the energy displayed in such a magnificent summer occupation.

Of course the principal characters get the major kudos in all shows and the performances of Liam Quigley, Cashadh Lyons, Katie Taylor, Conor Dunne and Loughlin Russell were of the top drawer variety. But, the contrast between the pirates, the lost boys, the braves and the mermaids, alongside the Darling family members (Ruth Everard, James Corbett, Aiden Mullaly, Colm Gleeson and Harry Keane) was crucial to the flow of the show and to the telling of a story in a visual sense. This could only be achieved with flawless preparation on the part of the company members, the wardrobe section, make-up and of course direction. Giving direction is one thing, but having those available to take it, and act upon it, is another thing entirely.

Phoenix can be justifiably proud of Peter Pan. Once again they have managed to excel and in doing so they continue to make it absolutely 'cool' for teenagers to engage in musical theatre. There is no room for complacency allowed in the Phoenix mantra - if something is to be done, it will be done right. How good a life lesson is that for all those teenagers on stage; what a magnificent influence.

It's clear that members of Phoenix Productions love doing what they do. And, it's also quite clear that the Thurles audience loves what they do as well - the standing ovations on each evening prove it. So, please keep on doing it.

Two questions are always asked after a Phoenix show - how will they manage to follow that next year? They always do. And, the other question from the younger kids - Can I be in the show next year? Phoenix' crew are inspiring the kids -that's the greatest compliment that can be paid them. Congrats to all.