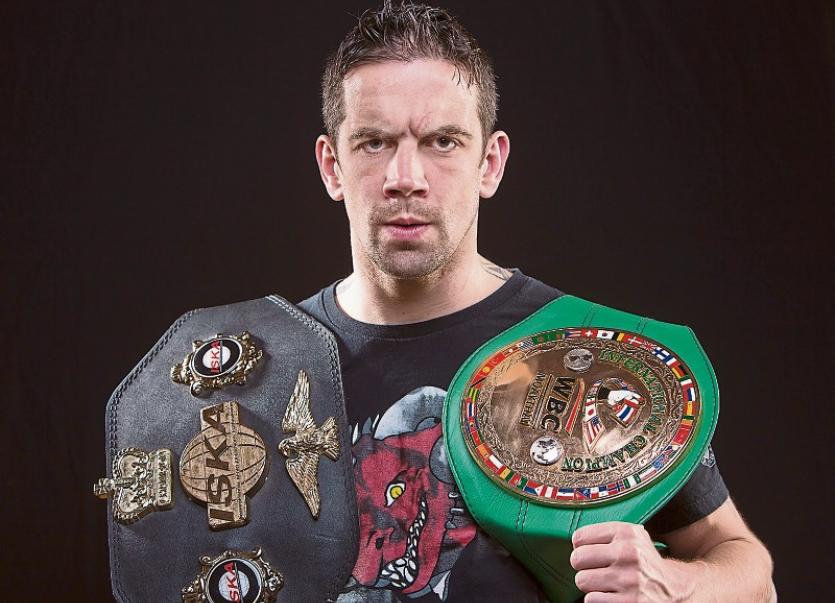 James O’Connell became the first Irish man to win a WBC International title in the ancient martial art of Muay Thai earlier this month when he travelled to the Playdome Centre, Clydebank, Scotland defeating Tam McCourt for the vacant International Featherweight Championship.

In a fascinating war of attrition, James finished the stronger fighter, winning rounds three and four and controlled the final round of the five round contest.

In what has become the norm for O’Connell, he lost the first round of the fight but that was as good as it got for McCourt.

O’Connell’s superior fitness and conditioning saw him control the remainder of the fight ending a three year undefeated run for his Scottish opponent.

Regarded as one of the biggest characters in Irish stand-up fighting, James, who is also the current ISKA Featherweight Irish champion, is son of publicans Jim and Margo O’Connell from Laffans Bridge Killenaule and is a past pupil of Scoil Ruain.

He fights out of the Courage Thai gym in the Dr Pat O’Callaghan Sports Complex in Clonmel and is coached by the club's founder, and former professional Muay Thai champion Walter Scott.

James embarked on his Muay Thai career ten years ago when the Courage Gym was based in Mullinahone. After five amateur fights he moved to Thailand for three months of training and turned professional on his return.

Over the years James has earned a fearsome reputation for his aggressive style of fighting, a style that has brought him huge success.

He is six time Irish Champion, four ring titles and two cage titles, and has 31 professional fights to his name.

His coach Walter Scott said - “James has an incredible attitude to training. He trains five days a week and never complains. He works exceptionally hard and he is getting his reward now for years of hard training.

“His style is very aggressive, always on the front foot walking forward and his real strength is his fitness. He always finishes strong in every fight. He gets stronger as the fight goes on”.

O’Connell’s exciting style means he is always an attraction to promoters in Ireland and the UK and he hopes that winning the WBC International title will achieve more interest further afield.

James added - “Winning this WBC belt will definitely open up more doors of opportunity for me. I want a shot at the European belt, that’s my goal now. I always wanted the Irish title and I got that. I then set my sights on the WBC belt and now that I won that my attention moves to the European title. I know I can win it and the WBC belt should earn me a shot at it in the near future”.

If James does get an opportunity to fight for the European title it would mean a re-match with current champion Aaron O’Callaghan.

In their last encounter O’Connell came out on top, finishing the fight on the front foot, aggressive and strong, just like he did in Clydebank, Scotland in defeating Tam McCourt, becoming Irelands first WBC Muay Thai champion.