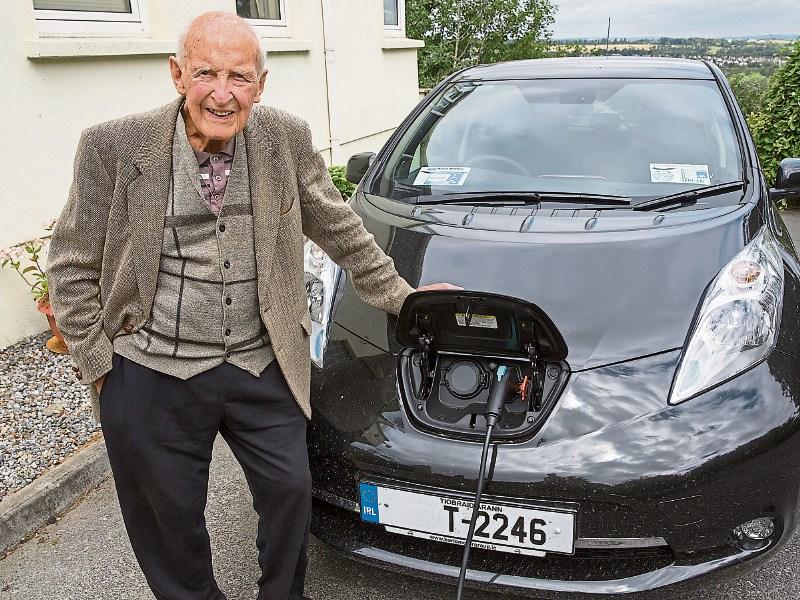 A 100 year old Clonmel man who started driving in 1930 behind the wheel of his father’s Ford Model T has become a pioneer for electric driving in Ireland after buying himself a new Nissan LEAF.

The 100% electric and zero emissions Nissan LEAF is the first new car that John Walsh has ever bought and with average fuel savings of €1,400 per annum his new EV would have netted him over €120,000 had the car existed during his motoring life.

“I would never have dreamt of buying a car at this stage. My motivation was to do something to improve the environment and to conserve the supply of fossil fuels. The banks are paying no interest, so I decided to spend my money on an EV to do my own little bit to protect the environment,” said John, who is preparing to celebrate his 101st birthday on September 10th.

The pioneering pensioner particularly enjoys being able to charge his new Nissan car at home. His father, Richard, who was an electrician by trade, helped him to build his family home in 1949 and he was living there for almost three years before they witnessed the arrival of electricity in rural Clonmel.

“I love the car in so far as I drive it on trips into town and to visit friends. There are a few places that I’d like to visit soon like Dungarvan, Holy Cross or Mount Mellerary Abbey which is quite a special place and somewhere I used to visit quite a bit in earlier years,” said John, who retired from his job as the chief accountant with Bulmers in 1981.

John revealed that another goal is to make the 250 kilometre round trip back to Foynes to visit the place where he grew up and first sat behind the wheel of a car as a teenage driver, and the fact that his new Nissan LEAF can cover the distance on a single charge was also something which inspired him to buy the car.

“I was about 15 or 16 years old when I first drove my father’s Ford Model T around the garage at the BP installation in Foynes where he was the manager. He had a few of them in his day and we used them to go back to Cork. It was a hell of a journey, 70 miles each-way, driving 20mph at best. We had two accidents and I wasn’t in either, which was quite the achievement,” said John.

“In the first, the wooden spokes broke on one of the front wheels causing the car to skid in a semi-circle. The second accident took place on the Mallow-Buttivant Road having travelled the winding road from Cork with unprotected cliff falls of 100 feet. The track-rod came loose but the car wandered harmlessly into the ditch,” he recalled.

“My first car was an early, second-hand VW. It had cable brakes and you had to anticipate stopping. That was around 1953. I drove a company car from 1960 until I retired. I only parted with Nissan once since I started buying my own cars and this is the first time I’ve bought a brand new car,” said John.

“I am convinced that we have to do something about global warming and pollution. I am a late convert to environmental protection and a bit of a late starter driving an electric car but this is my way of playing my part. My son also enjoys driving the car on longer distances, but I have priority on it,” he quipped.

John can vividly recall how fuel shortages led to the collapse of private and public transport during World War II, forcing him to take up cycling. He was working in Dublin at the time and used to cycle the distance to Limerick, where he met and first dated his late wife Brigid (Ciss). He maintained an on and off love of cycling up to 2009, making light of cycling the 252 kilometres on his long-standing annual pilgrimage from Clonmel to Knock.

John’s decision to join over 1,200 Irish motorists who have made the Nissan LEAF Ireland’s best-selling EV has not gone unnoticed at his local Nissan dealer, Barlo Nissan Clonmel, who have undertaken to service his new car for free.

“John is living proof that it is never too late to embrace change and to lead by example. The Nissan LEAF is the perfect choice for environmentally conscious drivers like John who want to drive a 100% electric, zero emissions car while enjoying the benefits of reducing their fuel costs,” said James McCarthy, CEO of Nissan Ireland.

“Electric driving is changing the face of motoring in the same way that the introduction of the Ford Model T opened up car travel just over 100 years ago. John is a unique link between the two generations and we are exceptionally proud that he is a customer and that he has become one of the many Nissan drivers who have made the Nissan LEAF the best-selling electric car in Ireland and the world,” he added.