Shrieks of surprise, tears of joy and hugs aplenty on results day 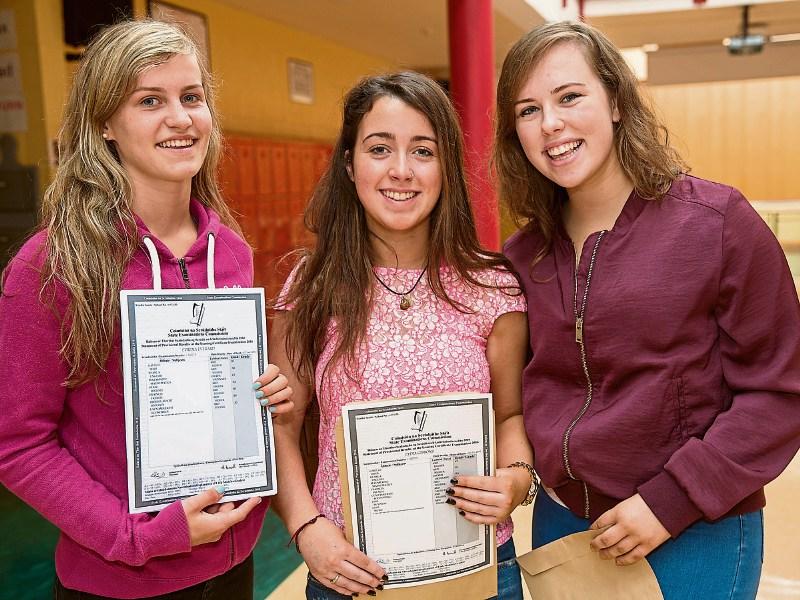 Sheer delight, disbelief and a good measure of relief flowed through the secondary schools in Clonmel last Wednesday morning, as Leaving Cert results were revealed.

The years of hard work, study and dedication all contributed to the day, and the tense, nervous, even tentative walks in to schools was followed in many cases by shrieks of surprise, tears of joy and hugs of relief.

Be it a future journey in distant colleges or apprenticeships closer to home the class of 2016 are now on their way.

On of the first to open the thrillingly-bland brown envelope containing her results at the Presentation Secondary School was a delighted Sinead Cosgrave. “I can’t believe it, I just can’t!” she gasped, revealing she had received six A1 grades. Smiling in shock Sinead told The Nationalist that she hopes to go on now to study physiotherapy in UCD and thinks her results will give her the points she needs to get a place on that course.

Opening their envelopes to cries of ‘oh my God’ and happy tears were friends Rachel Casey, Michelle Desmond and Sofhie O’Brien. Sofhie, who is now hoping to make it on to a course to study film, was delighted she hadn’t failed any subject! She said the points are high for the course she wants but she was happy with her results. Rachel is hoping to study biology and Michelle is hoping to go on to do engineering.

Another young lady who got the results she wanted was Ciara Laste. Ciara is off to study musical theatre in Dublin. “I’m happy that I have gotten closure now! I’m disappointed with one subject but I got what I wanted.”

Jordan O’Mahoney said: “I’m happy, very happy,” as she opened her results with her friends. Aisling Walsh admitted she was nervous going in to the Presentation on Wednesday morning but once she saw her results - “I’m pretty happy overall. I have no idea what I’m going to do now but I think these results will take me somewhere.”

Robyn Pender and Leanne O’Connell were happy with their results too but both said they are thinking of taking a year out before going on to college.

“I’m delighted! I’m going to college!” a very happy Ki Brannigan jumped for joy on seeing her results. She’s off to Waterford to study hairdressing in the Autumn. Her friend Selina Ryan said she was happy with her results too and hopes to do a business course in the CTI.

Across town at the CBS High School there was an altogether cooler attitude as the lads sauntered in to collect their results, many slipping out again with unopened envelopes to have a look in private.

Dean Clark and Shane O’Meara were relieved to finally have their results. Dean said he was off home to have a good look at his results and see what he would do now he has them.

Calvin Boland said his results were “perfect” for him. He was happy with the grades he achieved and said he is now hoping to study a course in the CTI before going on to study mechanical engineering. Saying his results were “grand” Graham Blanche said his plan now is to start an apprenticeship in mechanics.

“That’s me sorted!” was the declaration of Adrian Barry. “I’m just happy. I got what I needed, so happy,” he said. Adrian is off to study music at WIT this autumn.

Evan Corcoran siad he was “happy out” with his results. He’s hoping to start an apprenticeship now in plumbing or mechanics.

Over the river at the Loreto Secondary School there were more happy tears and hugs as one by one the girls filed into a room to be presented with their all-important envelope.

“I’m delighted, over the moon!” said a very happy Evrena Everard. Her first choice in the CAO system is to study primary teaching and Evrena said she thinks she has the points for that course. Eimear O’Donoghue wants to become a teacher of biology and chemistry and hopes she has the points to get on to that course in UL. “I’m delighted. The one I thought I wouldn’t do as well in I did,” she said, still amazed with her results. The girls were celebrating with Lydia Gibbons.

“I’m shocked! It’s class,” said a delighted Sarah McDermott who is now hoping to study business in UL. “I thought they made a mistake with my results,” she laughed. Michelle McMeel agreed: “I’m shocked - but in a really good way! I’m ecstatic!” She is hoping to study Social Science in UCC. Holly Fennelly was still trying to absorb her good results: “I’m so happy, really shocked! I don’t think I deserve the points I got at all.” She’s hoping to join Sarah in UL to study business.

Busy working out their points were Amy Gillman and Roisin Mulcahy, while Ciara Lonergan stopped just long enough to tell The Nationalist she was “absolutely delighted, so shocked. I never thought I’d do as well as I did,” before running off to hug her friends.

Nervously waiting outside the Loreto for her daughter was Caroline Maher whose daughter Sharleen had hidden herself away with her two best friends while they opened their envelopes. The girls were delighted. “Look at them!” Sharleen waved hers in joy. She said she will now be going on to study fashion and styling in Dublin. Mum Caroline said she was “ecstatic - this means the world to me. I’m very proud of her.” The other two parts of the ‘Three Musketeers’ as Caroline calls the three best buddies were Niamh Smith and Sinead McGrath. “It hasn’t sunk in yet,” Sinead said. “I did fairly OK, I hope to study childcare in Galway now.” Niamh said she was “very pleased, really surprised,” with her results and now hopes to study tv and film in Kinsale.

At Gaelcholaiste Cheitínn there were another happy bunch of students opening results envelopes.

Saoirse Nic Íomhair is planning to study nutritional sciences in UCC. “I’m delighted, so happy especially this year. The Leaving Cert gets harder and harder as it goes on. I did honours maths and convinced myself I failed but I passed and got the points. It was well worth it!”

Ailish O’Donovan said she was very pleased. “I got well over what I needed - I’m thrilled!” she said. Ailish is hoping to study Irish in UL this year.

Hoping to be offered a place in Trinity College to study theoretical physics is Seán Breathnach. He said he was both delighted with his results and relieved! Another Gaelcholaiste student hoping to study languages at college is Deirdre Ní Chaisleain. “I’m absolutely delighted. I want to study Irish and French in college and I got an A1 in Irish and an A2 in French so I’m good!”