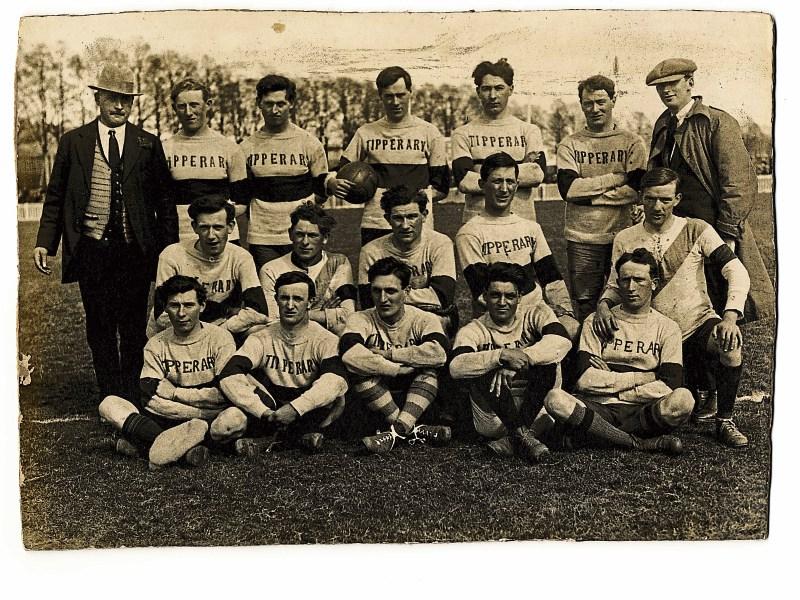 The current Tipp football squad may not have succeeded in reaching the All-Ireland final this time round but the grandson of the late Mick Arrigan from Deerpark, Carrick-on-Suir believes the enormous leap they made this season will have given them great confidence and inspire them on to greater achievements.

Brendan Arrigan, who lives in Oughterard, Co. Galway, has two treasured medals won by his grandad during his playing days, which he is considering donating or loaning to a museum.

The first is the All-Ireland football medal he received as a member of the Tipp team that won the 1920 title by beating favourites Dublin.

The second is a medal his grandfather received for playing in a fundraising match between Tipperary and Dublin in 1921. The match was organised by the Irish National Assistance Company, which Brendan believes was set up to help families of the victims of the Bloody Sunday massacre and other political killings.

Brendan's grandfather, who played club football with Grangemockler, was in Croke Park on Bloody Sunday, November 21, 1920.

He wasn't playing that day but was in the Tipperary dugout as a substitute when British forces started shooting ten minutes after the challenge game against Dublin started.

"Tipperary footballer Michael Hogan, one of the 14 civilians killed, was a very good friend of my grandfather's. They were very close and visited each other regularly," said Brendan.

Brendan says the medal from the fundraising match in 1921 is particularly rare. He doesn't have much information about the National Assistance Company and has asked an historian to research it for him. The medal is more militaristic in style than a normal sports medal, depicting a gun as well as a football and hurleys.

Bloody Sunday and the general turmoil in the country due to the War of Independence, led to the postponement of the 1920 All-Ireland senior football final until June 1922. Coincidentally Tipperary played Mayo in the semi-final.

A Freeman's Journal report of the Tipp v Dublin final that Brendan has read, described how a crowd of about 25,000 watched the match in Croke Park and it was a brilliant encounter.

"Mick had a great game. He was full forward and scored 2 points,” he recounted.

In his working life, Mick Arrigan qualified as a school teacher and taught for many years in Abbeyside in Dungarvan, Co. Waterford where Brendan's father Paddy, a double All-Ireland medallist in swimming and noted gymnast, grew up. Mick's wife was Johanna (Dolly) O'Keeffe from Kilsheelan, whose brothers Tommy and Jeremiah were also well known footballers.

Brendan still has Arrigan cousins living on the family farm at Deerpark, Carrick-on-Suir where his grandfather grew up. Mick's daughter Joan is still alive and lives in Co. Galway.

Brenda believes his grandfather and father would have been very proud of the Tipperary football team's breakthrough in this year's championship.

Despite growing up in Co. Waterford, his father, who passed away last year, always followed the Tipperary team's fortunes, as Brendan now does.

"Tipp have a lovely style of football and are a young team. Okay, they didn't come out on top on Sunday, but hopefully the experience will have helped them. Sometimes you are better off to lose one to drive you on to do better."

"It was exciting and lovely to see because it's rare enough that teams can pull out of the lower ranks. The championship is dominated now by these big teams and sometimes the way the system works suits those teams. It's great to see a young team coming up from the grassroots; coming through minor and U-21 to senior level. Hopefully we will see them in an All-Ireland final."