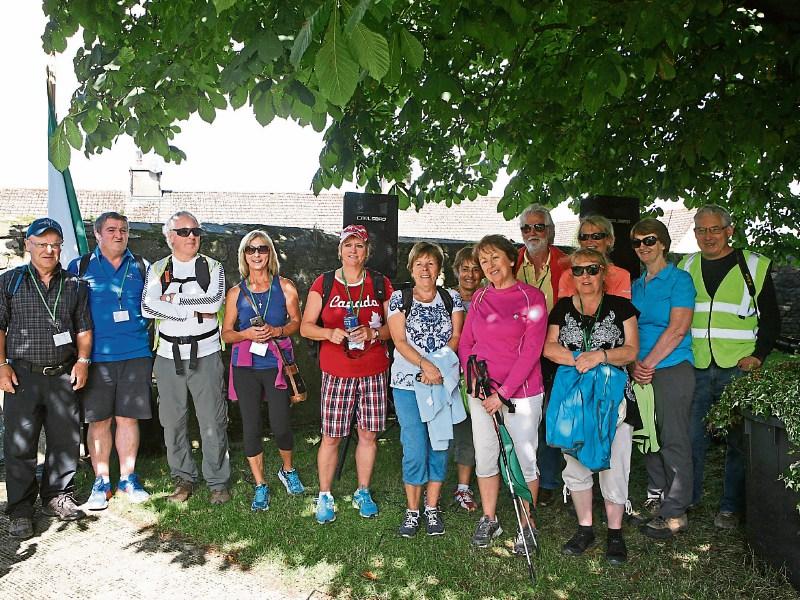 Fifty-seven Newfoundlanders were accorded a hearty Céad Míle Fáilte during their visit to Carrick-on-Suir, Kilcash and Ballypatrick last week as part of a cultural exchange festival that will next year bring a South Tipperary tour group to the Canadian province.

The visitors, most of Irish descent, spent three days staying with 30 host families in the Carrick-on-Suir area as part of the 11th Ireland Newfoundland Connections Festival, which finished last Saturday night.

Their stay in South Tipperary was organised by the Suir Valley Ireland Newfoundland Connections Committee based in Carrick-on-Suir. The Committee's Chairman Tom Nealon said their attention will now turn to organising the Irish delegation's return trip to Newfoundland in August 2017.

The Ireland Newfoundland Festival celebrates the close historical and cultural links between Newfoundland and the South East counties. Thousands of emigrants from this region settled in Newfoundland between 1760 and 1830 because of the flourishing fishing industry in the Canadian province. An estimated 500 people from Carrick-on-Suir and its surrounding hinterland were among this wave of emigrants.

The Carrick-on-Suir area was the Newfoundland group's last stop in their nine-day visit to the South East. They also spent time in the Thomastown area of Kilkenny, New Ross in Wexford and a day in Dungarvan , which is twinned with the town of Torbay in Newfoundland.

Their stay in Carrick-on-Suir began with a concert in the town's Strand Theatre last Thursday night starring 12 members of the Newfoundland music group, the Celtic Fiddlers, and the Irish based Newfoundland IE group, comprised of musicians from around the South East.

Last Friday's day of activities kicked off with a visit to Carrick-on-Suir's Farmers' Market in the grounds of Carrick Heritage Centre where they enjoyed eating barbecue cooked mackerel and sausages.

Over at the graveyard surrounding the Heritage Centre, which is located in a former church, two of the visitors, who are members of the Canadian Mounted Police and Canadian Armed Forces, joined with local writer and poet Michael Coady in laying a wreath at Carrick ONE branch's memorial in honour of all those killed in war and conflict.

During the ceremony, Mr Coady recited Thomas Kettle's beautiful poem "To My Daughter Betty, The Gift of God" written in 1916 just before he died during the Battle of the Somme.

Tom Nealon said after the Farmers' Market, 19 of the visitors embarked on a 12km Newfoundland Trail walk from the Heritage Centre to Ballypatrick. The walk was along the old road emigrants would have travelled on the first part of their journey to catch the boat to the Canadian province.

Other members of the Newfoundland group travelled by boat from Carrick-on-Suir's Boating Marina to Fiddown, which would have been another part of the departing emigrants' journey, while others enjoyed some shopping around Carrick,

In the afternoon, the Newfoundlanders travelled by bus to Kilcash Castle and listened to historian Dr John Flood lecture on the Castle and the Butlers of Ormonde. Clonmel harpistMaedhbh Quinton also performed for the group.

They finished off the day dining at Ballypatrick Tennis Club and attending the Tipperary Ramblers' “Tribute to the Men of 1916” concert in Kilcash Community Centre.

On the last day of their day, the Canadians, visited the Iverk Agricultural Show in Piltown and in the evening they enjoyed the Festival closing dinner in the Carraig Hotel. The dinner was attended by more than 130 guests including host families the Newfoundlanders stayed with, local authority representatives from the South East counties and a 30 strong contingent attending the Power Clan gathering in Dunhill, Co. Waterford the following day.

Mr Nealon paid tribute to all the host families who took in Newfoundland visitors, the organisers of Carrick Farmers' Market, Patsy Fitzgerald of Carrick Heritage Centre, Carrick Business Association, the boat owners, who gave their time and use of their vessels for the river trip and all those involved in hosting events and entertainment for the visitors.

He also thanked his 11 fellow members of the Suir Valley Ireland Newfoundland Connections Committee for the huge work they put into the Newfoundland group's stay in South Tipperary.