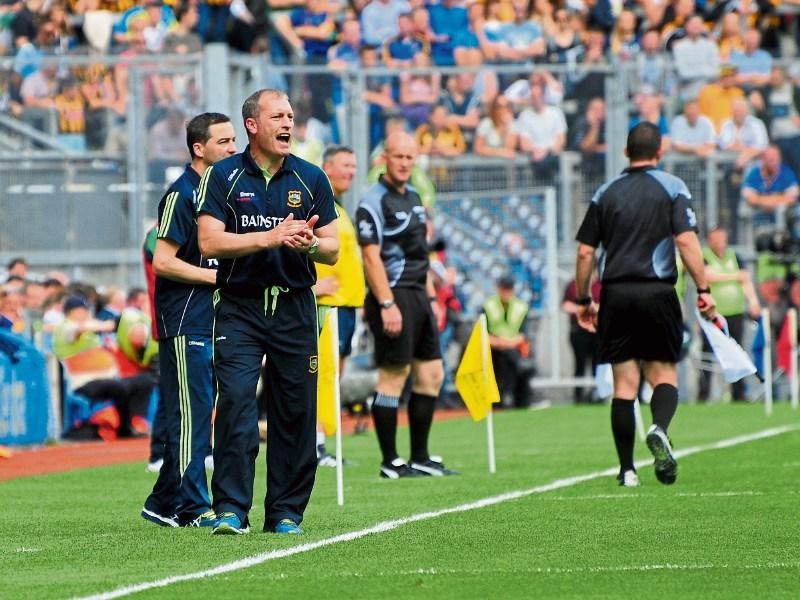 Tipperary manager Liam Cahill praised the maturity of his team that won the All Ireland minor title on Sunday and set up the first half of an historic double for the Premier County.

His players knew that the big Munster final win over Limerick, and the demolition of Galway in the All Ireland semi-final, would have no relevance on All Ireland final day in Croke Park, he said.

The job still had to be done, and they did it in style, said the delighted Ballingarry man.

And he resolutely defended his decision not to have dual players on his panel having learned considerably from the events of the 2015 season which saw Tipp reach two All-Ireland Finals, but won neither of them.

The dual contributed to both the minor footballers and hurlers returning from All Ireland finals last year without silverware. And Sunday's win in Croke Park over Limerick justified his decision, he remarked to the media afterwards in the bowels of the Cusack Stand.

The Ballingarry man said it was great to win the title even if the game wasn't a classic.

“Its great to win an All Ireland. You cannot complain about that but the manner in which we did it left a little to be desired, considering the standard we had set coming into the game and the expectation levels that were out there from Tipperary people in particular”, he stated.

But he said he was just thrilled with the battling qualities the squad showed, allied to the composure and patience they had spoken about during the week.

“If we hadn't the work done behind the scenes we would have been beaten.

“The way Limerick set themselves up caused us problems, they harried and hooked and never gave up.

“We went five points up in the first half and they brought it right back and half time came at the right time for us.

“They put a bit of doubt in our heads but thankfully I have some great men in that dressing room and players with massive potential of playing further down the line for Tipperary and today will stand to them in a big way because it was a tight battle.

He spoke about the battles they had on their way to the final and how that had stood to them and hardened them for the final.

But he accepted that some of the players who had shone in earlier games failed to reproduce the magic in the final.

“Some of the players who set the place alight here three weeks ago, well it didn't go for them today but the subs did well.

“I had to tell several guys on Friday night that they weren't playing or part of the 24, players who were showing unbelieveable form in training.

“But the bench justified everything today, the way they came in and took us over the line. I am thrilled for those players.

“There were high expectations after the big wins in the Munster final and All Ireland semi-final but the players I had this year were very mature for minors and bought in and understood that this wasn't a foregone conclusion and they had to work hard in training and around their mindset coming into the game”.

He paid glowing tribute to the work of coach Michael Bevans and all his the backroom team, including sports coach Sandra Molloy, and said what they did behind the scenes was just incredible.

“Because if the mind isn't right you are in big trouble and we needed our minds to be right to get over the line”.

He said only two or three of the team and five or six of the panel are underage next year, similar to last year, but pointed out that they are working hard on development squads and there is talent coming through from u-14 right up to u-17 so there will be no shortage of players to fill those gaps next year.

He said in the aftermath of victory that he was disappointed with some of the energy levels of his players, especially upfront.

“A couple of our key men, who were buzzing around the place here three weeks ago, were flat and there's nothing you can do about that on the line, no matter what you say to a fellow, you are really just going for the reserves after that.

“We stayed as patient as we could, inside and outside the lines, and we gave everyone a chance to work thier way into the game”, he added.

Cahill said the win made up for the disappointment of last year's final when the side lost to Galway. And he made no secret of why he believed that had happened

“It was unbelievable heartbreak last year. People said you did very well and brought an average team to an All Ireland final. Last year's team wasn't an average team, they were well above average but they made themselves average by wanting to play everything and that is the reason why the two buses at minor grade headed down the M7 with no silverware as they were burned out from playing everything.

“And I have no issue with the dual name in Tipperary once you are not drawing from the same pot to fuel both. It is not just possible, it has been tried and tested and it has failed and today is evidence of that”.

He pointed out that Colin English from Fr Sheehys started the year in football and then came in when they were beaten and won man of the match on Sunday.

“He wasn't prepared to commit to hurling earlier on in the year and that was fine, no issue with that, but when the footballers exited it was open season and now he has an All Ireland minor hurling medal in his back pocket as a result.

“I make no apologies for it. I know I had my critics and was branded as being dishonest, a hypocrite and naive and it definitly hurt at the time but when you are in a job like this in Tipperary you have to get on with it and I felt what I had to do was right for the players involved and for everybody and we had to kick on and do what we had to do and it worked out”.