Joy bells ring out for new Bishop of Killaloe

Noel Dundon reports on the Ordination of Bishop Fintan Monahan on Sunday in Ennis, as Bishop of Killaloe 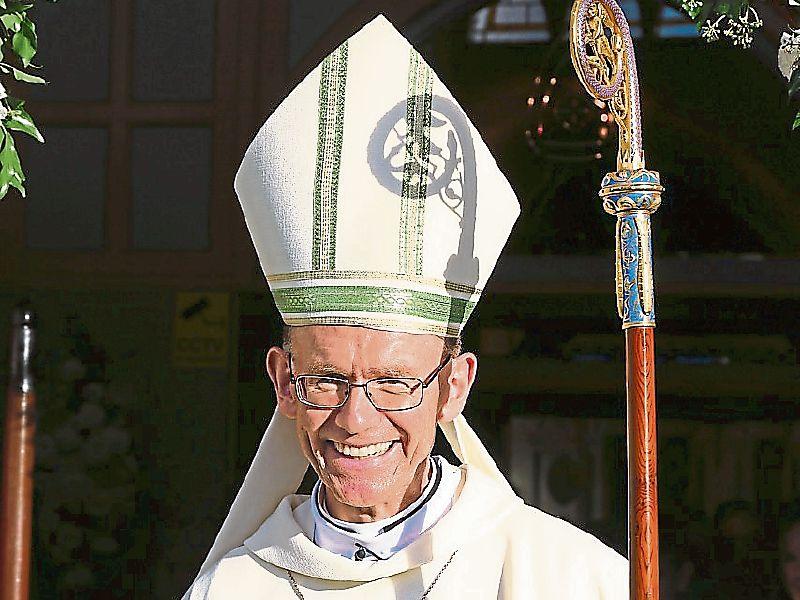 The joy bells rang out in exultation in Ennis Cathedral on Sunday evening last as the new Bishop of Killaloe, Fintan Monahan greeted his people following his Ordination by Archbishop Kieran O'Reilly, his predecessor and current Archbishop of Cashel and Emly.

The packed SS Peter and Paul Cathedral joined with Archbishop Kieran in congratulating the Tullamore man who was Ordained to the priesthood in June 1991. The new Bishop was joined at the ceremony by his father and mother, Tom and Peg, his sister Caitriona and her husband Dominic, his brother Sean, family and many friends from all over. It was a very proud day for them all and a very emotional one also as Bishop Monahon now takes on responsibility for the fifty eight parishes of the diocese of Killaloe, which includes fifteen parishes in County Tipperary.

Indeed, there was significant participation of Tipperary people in the ceremony which lasted for well over two hours with soloists including Ann Spain of Kilruane, Richard Bourke of Lorrha; Ann Heffernan of Cloughjordon as Commontator; the entrance procession featured Michael Kelly, Aileen Byrne, Anna Dillon, Siobhan Darby and Jack Maher from Nenagh; the invocation of the Holy Spirit featured liturgical movement from St Anne's Special School, Roscrea including Caoimhe Campion, Amy Whelan, Tara Kenny, Michaela Foley and Aife Dalton; the Book of Gospels was presented by Noreen Spain of Kilruane; while there were intercessions from Lorraine Shaw of Roscrea. St Mary's Choir, Nenagh and the Cistercian College Choir, Roscrea also participated as did the Nenagh Youth Pastoral Council.

Archbishop Kieran was joined by the Papal Nuncio, Archbishop Charles Brown and Archbishop Michael Neary of Tuam, while Bishop Emeritus of Killaloe, Willie Walsh was also in attendance.

Archbishop Kieran, who was himself appointed Bishop of Killaloe only six years ago, told Bishop Monahan that he would be embraced by a warm and welcoming people in the diocese and that welcome would continue throughout each parish when he visits. It was, he said, a joyous day for the diocese, the priests, the people and of course for Bishop Monahan and his family and friends.

The Mandate from the Holy See which was presented by Pope Francis on July 29 in St Peter's Rome was read by Fr Albert McDonnell prior to the Homily which was preached by Very Rev Canon Brendan Kilcoyne, PP VF. Athenry. His wide ranging homily included an appeal to Bishop Fintan to lead the Church with energy and with reserves which many of those working in the Church do not have currently.

"We are tired, we are exhausted... We are like somebody who has had a terrible accident or stroke. The simplest things must be relearned. We have to live all over again, in a new world, how to pray, to teach, to preach and to live the faith," he said.

He added, “I say this, in the presence of God, the bishops and clergy and the faithful whom we serve. I say it as a priest and as a descendant, like yourself, like so many here today, of the forgotten ones, those of unremarked lives and unmarked graves who nevertheless managed to pass on to us physical life and the secret of life eternal. The eloquently Silent People. This people will not be led by soft, easy words and passable example. To paraphrase Yeats, we are no small people. We are of the spiritual stock of Patrick, Flannan, Jarlath and Columbanus and we will not be led by small men. We will not be ruled by a careful, calculating, mediocre spirit. To enter into this journey, this faith, in the words of Eliot, “…costing not less than everything…” we must be led by those who know the price of such leadership and are willing to pay. If you want us to follow, you must lead from the front. We will follow that. We will follow a saint."

He concluded, "Saint Bernard once said that the Church had lots of channels for grace, but a channel merely transports and exhausts itself. The Church, he said, needed reservoirs. A man needs to be very holy for life in a hard land, as you will need water not only for yourself but for others also.

“ I wouldn’t talk like this to you Fintan, in front of everyone here, if I didn’t know, after some twenty years of friendship, that you can do this, that you are well on your way, that you will keep faith with us who follow on,” he said.

The atmosphere of celebration continued throughout the afternoon and into the evening with Bishop Fintan meeting and greeting those present following a magnificently orchestrated and carried off ceremony. The setting was spectacular, the music and song splendid and the prevailing sense of great hope, palpable as the 60th Bishop of the diocese of Killaloe begins his journey towards renewal of an ailing Church.

No better man either - the Holy Father, it seems, has chosen well, according to many who attended on Sunday.