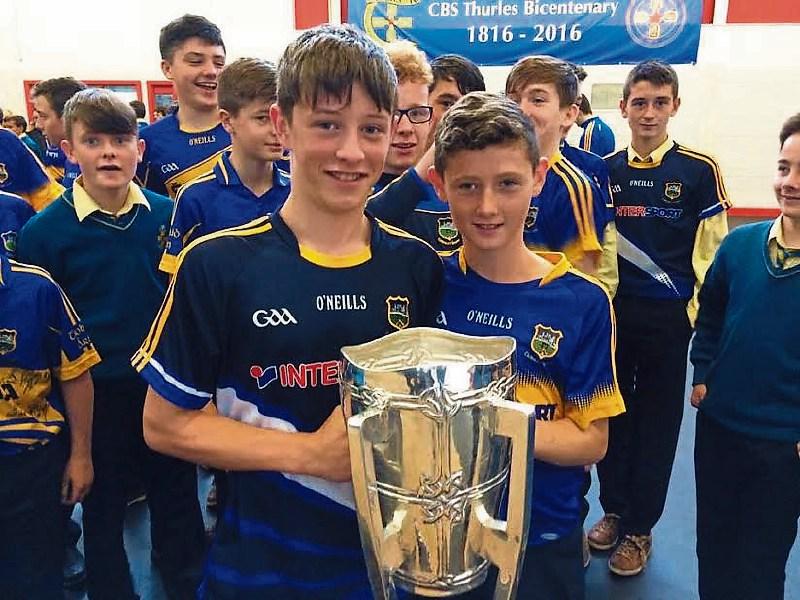 There was great excitement on Thursday morning in Thurles CBS Secondary School when the Liam MacCarthy Cup and Irish Press Cup were the guests of honour at a special function to welcome back current and past pupils of Thurles CBS who were involved with the Tipperary senior and minor hurling teams in securing All-Ireland honours earlier this month.

The school had no fewer than eight past pupils on the senior panel, including the entire Tipperary full and half back lines, as well as five pupils, both past and present, on the minor panel.

On a national level there are very few schools which could boast such a high level of involvement in the sport’s most prestigious flagship occasion and this involvement is an obvious testament to the strength of hurling in the school. Well done to Cathal Barrett, James Barry, Michael Cahill, Paudie Maher, Ronan Maher, Seamus Kennedy, Aidan McCormack, Steven Cahill, Killian O Dwyer, Conor Stakelum, Eoin Barry, Dillon Quirke and Bryan O Meara.

County Board PRO Joe Bracken, Tipperary senior hurling stats team member Ed Donnelly and County Games Development Administrator Andy Ryan were other past pupils in attendance along with County Board Chairman Michael Bourke and special guest and past pupil, Peter Ryan (Upperchurch Drombane) who recently returned from taking part in the Men's B Tandem Cycling Time Trial (Road) and Road Race at the Paralympics in Rio de Janeiro.