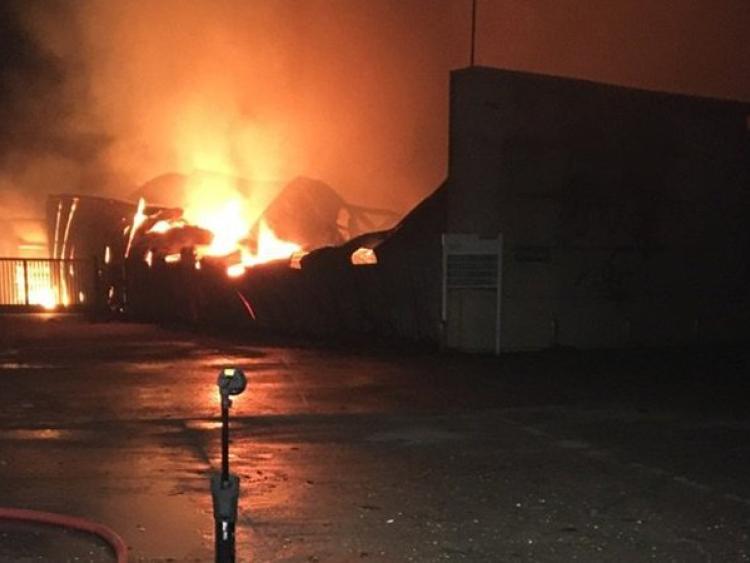 Several units of Tipperary Fire Services were still on site at the TIPPO International plant at Kilkeary this Tuesday morning following the devastating blaze that destroyed the factory on Sunday night.

Smoke was still billowing from the burned out premises as the fire services remain on standby.

The charred plant remains sealed off as an investigation gets underway into the cause of the fire. However, finding the cause may prove difficult because of the extent of the damage the fire service has said.

The Thurles to Nenagh road has reopened using a stop / go lights system and this is likely to remain in place until later this morning.

Meanwhile, the owner of TIPPO International Ltd, Paddy Martin, has vowed to be back up and running despite the major fire that destroyed the plant this Sunday and Monday.

Mr Martin, managing director, said that they had already identified alternative premises for production and were implementing an action plan to recommence limited production within the next week.

Mr Martin said that TIPPO International Ltd and the Martin family were "devastated" by the fire which broke out at around 6.40pm on Sunday.

"We would firstly like to thank the Tipperary Fire & Rescue Service for their incredible work throughout the night in extinguishing the fire. We are grateful that there were no injuries or loss of life. We are also grateful for the support given to us by customers, suppliers, staff members and neighbours and look forward to repaying their loyalty to us in the future," said Mr Martin.

The Minister for Social Protection, Leo Varadkar,confirmed that officials from his Department briefed employees of TIPPO International this Monday in the Abbey Court Hotel, Nenagh, on their social welfare entitlements as a result of the factory being destroyed by fire.

Departmental officials will attend at the Department’s branch office in Nenagh and the Intreo Centre in Thurles this Tuesday and Wednesday between 9.30am and 4.00pm to help employees to apply for social welfare supports.

"This is a very difficult time for the owners of Tippo International business and their staff. Officials from the Department of Social Protection are available at the Department’s Branch Office in Nenagh and the Intreo Centre in Thurles to advise staff on welfare and employment supports," said Minister Varadkar.

The fire at the furniture manufacturing complex at Kilkeary, was battled for over 16 hours by 11 units from fire stations in Nenagh, Thurles, Roscrea, Borrisokane and Cloughjordan as they attempted to bring to bring it under control.

Due to the blaze, the R498 between Nenagh and Thurles was closed for much of this Monday, with diversions in place at Ballinamona Cross. Despite the road being partially reopened this Tuesday, motorists are still being asked to use the M7 and divert either via Roscrea or Templemore at the Moneygall exit.

The TIPPO showrooms and plant at Kilkeary were officially opened in 2007 by then Taoiseach Bertie Ahern. The company has been in business since 1990 producing kitchen and bedroom furniture for the Irish and UK market, and Mr Martin pledged that will continue to do so in the years to come.

Labour TD for Tipperary Alan Kelly told the Tipperary that he was "devastated" for the Martin family and all who worked at the factory.

"This family business is a great employer to local people. They need to be supported through this incredibly difficult period," he said.

Fianna Fail TD Jackie Cahill said that his thoughts and prayers were with Paddy and Mary Martin and their workforce.

And he has called for every tool at the disposal of the State to be used to help support TIPPO get back up-and-running as quickly as possible.

"The blaze on Sunday night has put the future of the company, and the many well-paying jobs at risk in the short to medium term. My thoughts are with the staff members that are fearful for their futures. Now is the time for the full force of the state’s enterprise and welfare networks to be put into action," he said.

Deputy Cahill said that the factory's management must be supported to refurbish, and reopen, their factory as quickly as possible.

“This is a major local employer, employing 69 people, and one of the few non-agriculture based enterprises in the area. The priority for the Minister for Jobs, Enterprise and Innovation must be getting production up-and-running again, and in the meantime, supporting the staff in terms of social welfare support,” said Deputy Cahill.