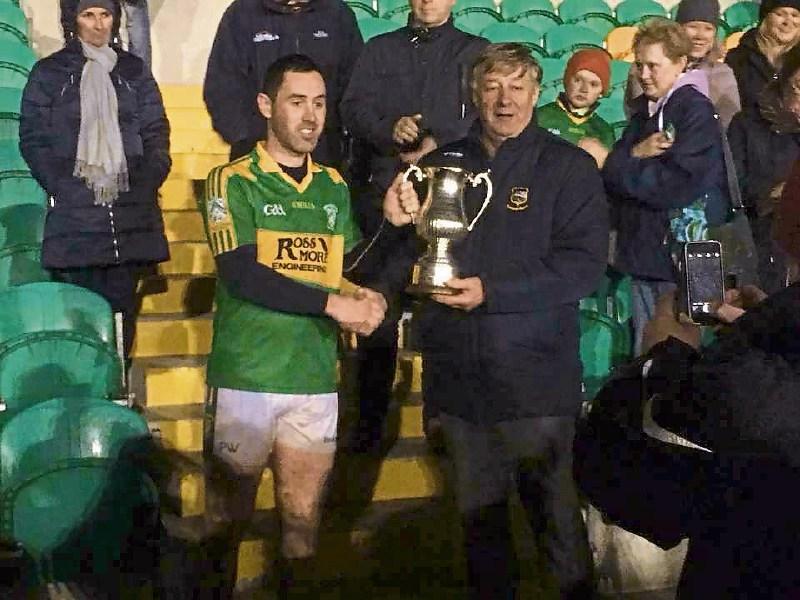 The West champions stamped their authority on the game in the first half and built up a 1-5 to no score lead on their rivals, who, while battling hard, never really threatened the security of the Clonoulty lines.

The statistics speak for themselves. Loughmore did not record a wide until the fourteenth minute, and registered their second in the 26th minute, a clear indication of how much on top the winners were. In the same period, Clonoulty had nine wides as well as their six scores, and their main concern at the break was would they be left to rue the chances missed in the period.

A continuous downpour and a strong down-field breeze, made life very difficult for the players but Clonoulty-Rossmore coped the better and much of the first period was played in the Loughmore-Castleiney half of the field. Before they opened their account in the 5th minute with a Paidi White free, Clonoulty-Rossmore shot three wides. Then Aaron Ryan and Dillon Quirke added further points but the crucial score came in the 16th minute when Quirke punished a defensive error with a Clonoulty goal.

Loughmore-Caslteiney were winning their fair share of ball but their handling and use of it was not up to par. Clonoulty were more efficient and their approach more structured, and with further points from Ger Mockler and a Paidi White free, they went in at half-time with a 1-5 to 0-0 advantage.

The game was not beyond Loughmore-Castleiney at this stage, but it was going to take a big improvement by them to turn things around. However, by the 42nd minute, Clonoulty-Rossmore had extended their advantage with a brace of points from White frees and another from Ronan Heffernan.

Loughmore-Castleiney emptied their bench at this stage, and that, and a possible dropping of the level of concentration in the Clonoulty camp led to Loughmore’s first score in the 51st minute, a point from sub Martin O Connell who settled in very quickly on his introduction.

Tommy Maher added a second shortly afterwards, and in the 59th minute Henry Maher finished off good work by Andrew Ryan and Martin O Connell with a Loughmore goal. It was too late to make a real difference but it gave a much more respectable look to the scoreline, and reflected more accurately the effort of the Loughmore-Castleiney side.

Clonoulty-Rossmore’s win was fully deserved and adds to the titles won at this level in 69,85, and 2000. In addition to gaining them promotion to intermediate grade next year, it also qualifies them for the Munster Club championship in which they will meet Cork champions, Gabriel Rangers, a contest the West lads can look forward to with some optimism based on their showings at home.

Clonoulty lined out without injured goalkeeper Odhran Quirke and defender James Horan but overcame these setbacks comfortably. Paidi White’s accuracy off frees in very difficult conditions was a big boost to them and the team captain was successful with four efforts. Sean O Connor and Donnchadha Ryan also did well at the back while Aaron Ryan and John O Keeffe were on top at midfield.

Up front Dillon Quirke opened impressively with Michael Ryan and Paddy Ryan to the fore afterwards.

Loughmore-Castleiney left their best work to the finish in their bid to add to the title they won back in 1978. Physically, they lacked the power of their rivals, but had their scores come earlier, it could have made for a very interesting finish. Such as Dinny Brereton ,Peter Nyland, Anthony Ryan, Pauric Hennessy, and sub Martin O Connell did all in their power to turn the tide.