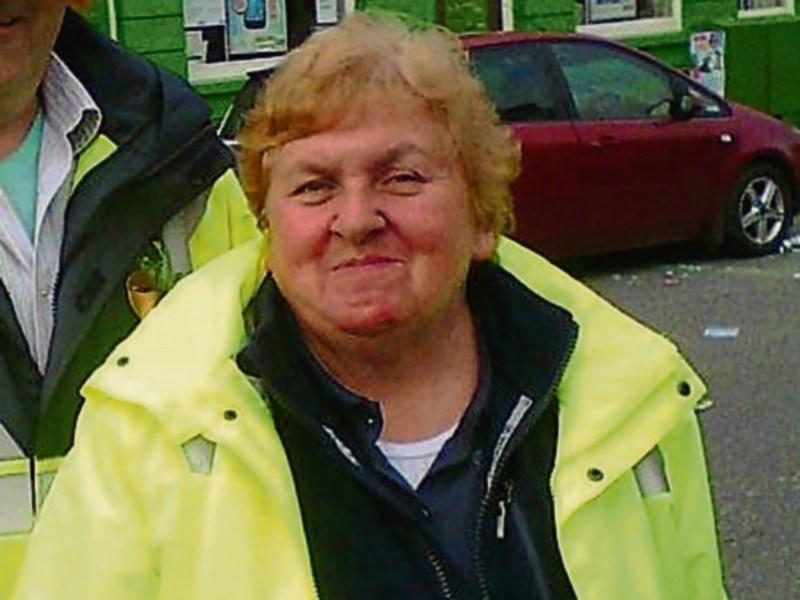 The passing of Katheen Wright, Mitchel Street, Thurles recently, after a short illness occasioned great sadness in The Cathedral Town - her adoptive home which she did so much to maintain.

Indeed, when the President of Ireland, Mary McAleese, visited Thurles some years ago, she commented to Kathleen on how well the town was looking - a real tribute to the supervisor who had worked in the job for almost two decades.

A native of Lanespark, Killenaule, Kathleen was known throughout the town with her hi-viz jacket and her easy smile which was almost part of her daily uniform.

She had a unique sense of humour and despite all weathers, she loved getting out and about doing her job and ensuring that the town was in ship shape. Indeed, this was reflected upon by her son Mattie when he said, “One thing that kept my mother going was her job- she looked forward to getting up the next morning. Come hail, rain or snow she was there, working away and keeping the order. As a supervisor for over 17 years, she always had a positive workforce coming out in strength for any event during the year. The County Council was always so supportive of her- it wasn’t just a strictly business environment, there were great friendships and bonds established over the years.

“Mam loved her job, she did it with pride and a smile, and nothing stopped her from accomplishing great things. She wasn’t just a mother to me but she was a mother to everyone on the workforce.”

Kathleen had a great sense of community and whether it was working with the St Patrick's Day Committee, or getting ready for a big game in Semple Stadium, she wanted things to be right. She also made a huge contribution to the Parents Council of Coláiste Mhuire Co-ed and was a real figurehead for the group - the school community is missing her greatly these days..

“One thing that never wavered with Mam was her sense of humour - it could be a miserable day but she’d manage to light up the world with her humour and cheeky smile. Mam was always supportive of anything I ever took an interest in. I remember when I first took up Karate and I came home with a black eye. She gave out for a week after it but nonetheless, she continued to support it, and she’d often joke about it,” Mattie said.

Councillor David Doran was delighted that the Municipal District paid tribute to her at a recent meeting. She was, he said, very highly respected in the council, took great pride in her work, and was essentially a very kind person. “She was known all over the town and knew everyone in it as well,” Cllr Doran said.

Her friend Bea referred to the many friends Kathleen Wright had - she was an infectious character who made friends easily. They are missing her terribly these days, but are all the better for having known and loved her.

Another friend Eileen described the sense of loss at Kathleens passing and said that people like her are very difficult to replace.

Kathleen made a difference to the many people she met and that was reflected in the offer of support to the bereaved during the course of her funeral. Her life was celebrated greatly and though there was sadness at her passing after so brief an illness, there was also great appreciation for the life she enjoyed, the people she met and her many achievements.

Kathleen was a special person to many but to her son Mattie, her brother Tom and lifelong friend Tom Coffey, she meant the world. She was the great woman behind the good men and she has left them with fond and happy memories which will sustain them during hard times.

The Thurles community too has lost a dear friend - perhaps when the Christmas lights appear in the next few days, we might just say a silent prayer for Kathleen Wright.

May she sleep peacefully in the Heavenly home.