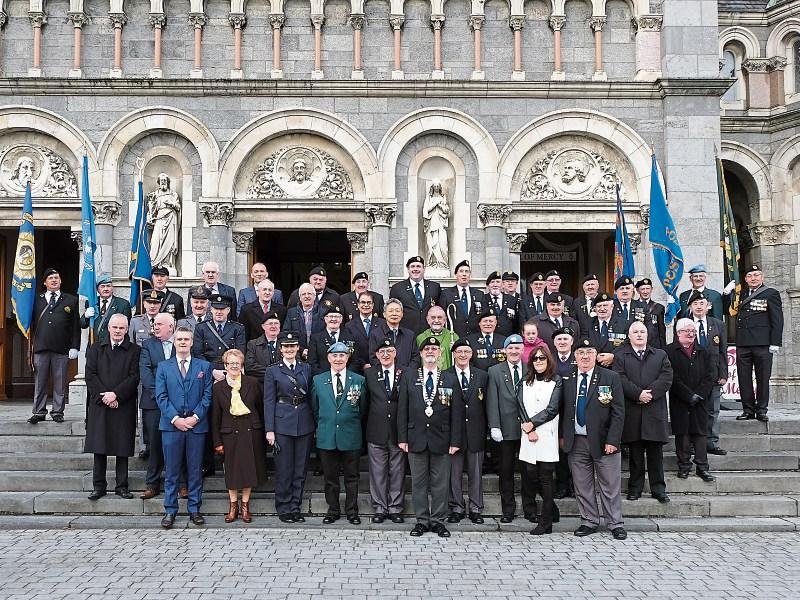 Also unvelied were two memorial plaques to two very brave Thurles men Dr. William Bradshaw, Surgeon with the British army in the Crimea and in the India Mutiny serving with the 90 th Light Infantry -William's Regiment became part of the relieving force and it was here that he demonstrated the leadership and gallantry that earned him the Empires highest award the Victory Cross.

Also honoured was Corporal John Cunningham V.C 2nd Battalian Leinster Regiment for most conspicuous bravery 1914-1918 World War 1. There is no doubt that the courage of this N.C.O cleared up a most critical situation on the left flank of the attack.

The day started at 8pm when members of the Memorial committee Mr PJ Ryan Cllr David Doran, Mr Pat Walsh, Mr Johnny Wort and Mr Ken Kirby were in St Mary's International Garden of Remembrance for the last clean up, the raising of flags, the sound system in place, and all the chairs put in place. 11.30 am His Excellency

Before the Ambassador was escorted into the Cathedral of the Assumption by June Molony and Julia Cosden, the Thurles Silver band Led by Mr Michael Loughnane entertaned His Excellency by playing our famious Tipperary Anthem Slievenamon.

In the Cathedral His Excellency met His Grace Most Rev Kieran O' Reilly Archbishop of Cashel and Emly, Chief Superintendent Catherine Kehoe. The 12 Noon mass was celebrated by His Grace and Fr. Jerry Hennessy C.C and after Mass invited guests and the colour party led by piper Tadgh Ryan marched to St Mary's International Garden of Remembrance where Cllr Jim Ryan welcomed all and said it was a very proud day for the committee and for the people of Thurles.

Councillor Joe Burke Mayor of Thurles Templemore and Roscrea Municipal Council was on his first visit to St Mary's and was very impressed with what he saw. The committee, he said, should be very proud of their work over the last 18 years at St Mary's International Garden of Remembrance which is twinned with the Irish Memorial Garden in Tibnin South Lebanon.

After thw wreaths were laid, the plaques unveiled and the Remembrance Prayer The Exhortation recited, there was a minute of silence observed.Mr Tadgh Ryan played a lament on the bagpipes before the Last Post and Reveille was played by Mr Charlie Parsons from Co Kilkenny. The Irish Flag was raised to full mast by Mr Paddy Walsh I.U.N.V.A North Tipperary Post No 18. Piper Ryan then played the National Anthem

A special word of thanks to all who made the ceremony a day to remember.