Shell will be the final piece in St Mary's Remembrance Garden 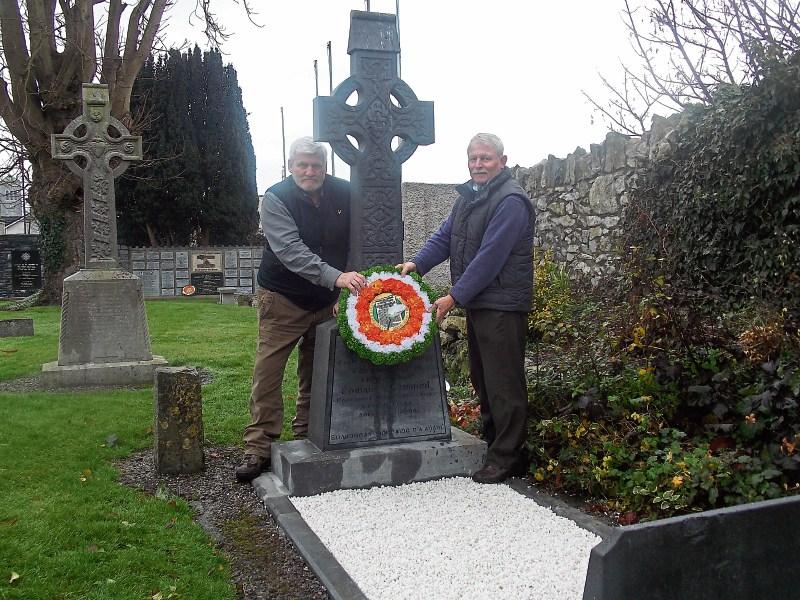 Noel O'Dwyer and John Wort laying a wreath at the grave of Tom Semple.

St Mary's International Garden Of Remembrance is almost complete with a shell to be added very soon as the final piece in the jigsaw.

On Saturday morning, December 10th, Mr John Wort and Mr. Noel O Dwyer laid wreaths on the grave of Mr. Tom Semple R.I.P and at the Community Memorial Wall on behalf of the Durlas Eile Eliogarty Memorial Committee and the people of Tipperary.

We have one more project coming up in the new year and this will be the last memorial to be erected - it will be very special. The history of this project covers three countrys Israel, Lebanon and Ireland and the memorial will be erected on the site of an old structure that fell down some time back beside the memorial to the great Tom Semple.

The story? A 155mm artillery shell fired from Israel into Lebanon during the 2006 Israeli-Lebanon war did not explode. The shell was made safe by engineers from the Fin - Irish U.N.I.F.L Batt in 2007. It was then used as a church bell in Camp Ina Lebanon and Airen Barracks Dundalk. It was then relocated to the 31st F.A.R Thurles in 2008 until their disestablishment in 2012 .

The shell was presented to Mr John Wort Chairman of the Durlas Eile Memorial Committee by Comdt. Joe Gleeson on the 19 March 2016. This project, when finished, will be very special attraction to St Mary's International Garden of Remembrance here in Thurles, Co Tipperary. On behalf of the Memorial committee I would like to thank Comdt Joe Gleeson for his very kind gesture and for all his help in the past with our ceremonies. I would also like to thank all the people who have helped us in the past. I hope that you will also be there for us in the future. I would also like to wish all our friends at home and overseas a very happy Christmas and good health for 2017 and into the future. A special word of thanks to the Staff of the Tipperary Star for all their help over the year covering all our ceremonies and events in St Mary's and in the Cathedral. Your Friend in Peace