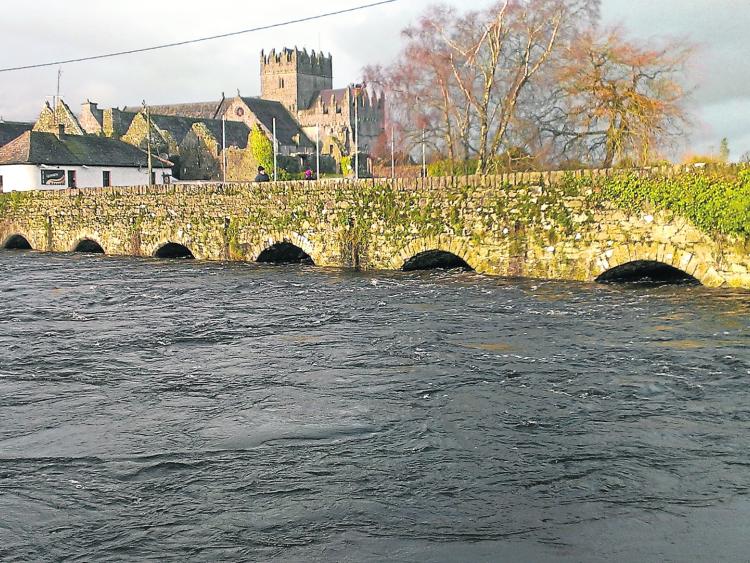 The bridge at Holycross village.

Tipperary County Councillor Micheal Lowry has urged the local authority to revisit the provision of a footbridge or pedestrian facilities at the  bridge in Holycross which lingers in the shadow of historic Holycross Abbey.

Tipperary County Councillor, Micheal Lowry has called on the local authority to revisit the proposal to have a footbridge included as part of the historic bridge structure in Holycross village.
This issue had been on the table prior to the amalgamation of the North and South Tipperary County Councils with extensive investigations conducted into how a footbridge could be incorporated to make for safer passage over the River Suir, rather than having to use the same bridge as motorists.
The two local authorites which had juristiction at either side of the bridge, had been proactive in trying to come up with a solution, but following the amalgamation and all of the structural changes to the councils with the establishment of the Municipal Districts, the matter was put on the backburner.

However, at the January meeting of the District, Cllr Lowry spoke about the necessity to tackle the problem again and said that moves should be made to find a solution to a problem which is growing more difficult by the week.
“We have been talking about this for a long time now and we looked at a number of possibilities, including the provision of a separate footbridge. There is a need for something to be done because the bridge is simply too narrow for vehicles and pedestrians. In fact it is dangerous and you have so many pedestrians using the bridge to cross over the river that they are putting themselves in real danger.
“It is my veiw that there should be some way of creating a pedestrian section beside the bridge in some way secured to the bridge structure. It should be possible and I feel that we need to look at this now in a very serious way,” Cllr Lowry told members of the District.
Councillor David Doran (Sinn Fein) supported Cllr Lowry's call and said that he also felt that pedestrians needed to be catered for in the village of Holycross, and he also called for the footpath on the Boherlahan road (opposite Ryans pub) to be completed.
Senior Executive Roads Engineer Mr Michael Hayes, who was in attendance at the meeting, agreed to have the bridge and the surrounds re-examined to see if it would be possible to cater for pedestrians in some way or another in Holycross.