Standing ovations all round for Thurles' Juno and the Paycock 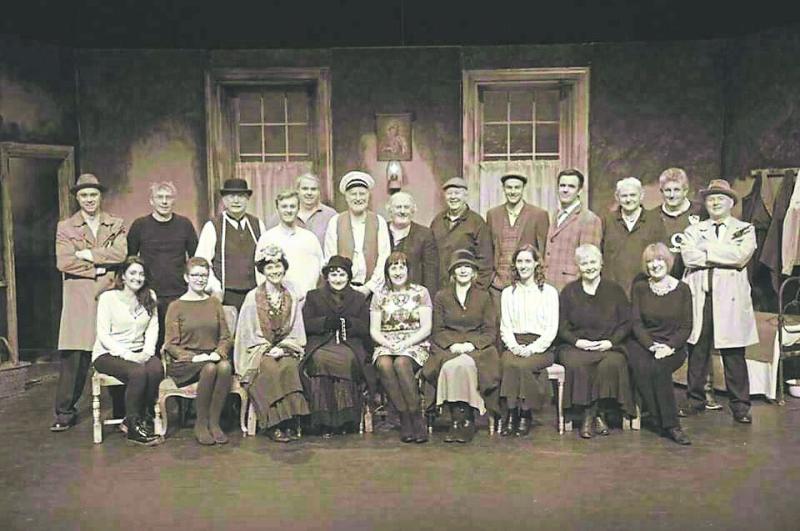 Thurles Drama Groups Juno and the Paycock was staged before packed houses all last week and received rave reviews for their production in The Source Theatre.

It was standing ovations all round for Thurles Drama Group throughout their run of the Sean O'Casey classic Juno and the Paycock in The Source Theatre last week - and appreciative ovations was the least the magnificent cast deserved.
The Source has been very fortunate to have hosted so many excellent productions through the years, but few better than Thurles' Juno which really wowed the audience, and brought tears of laughter and sadness in equal measure.
Of course this is no more than Thurles' audiences have come to expect from their local Drama Group and that is why so many came throughout the week, from far and wide, to see Director Margaret McCormacks interpretation of the classic.
Many of those who returned had been at the previous viewing of this well known piece of theatre in Scoil Ailbhe, some twenty nine years previously and of course they would have recognised some the same faces playing the same parts - a remarkable feat for Liam Ryan, Martin Fitzgerald and Mary Condren who were simply outstanding once again as Joxer, Captain Boyle and Juno respectively.
The depth of talent in Thurles in incredible and the Drama Group has introduced new blood almost every year. However, the new members blend in seemlessly - a real tribute to them and to the established players who welcome them with open arms.
Kate Lineen and Gavin Murphy - no strangers to the stage scene admittedly - are relative newcomers to drama, but they looked like old pro's. Not only were they comfortable and at ease on stage, they brought an uncomfortable intensity, which is exactly what they were supposed to do, while at the same time extracting great pathos for their plight from the audience.
Mary Bowe as Masie Madigan and Michael Blake as Needler Nugent were both in the production of twenty nine years ago, but in different roles proving their great adaptability and perhaps also the passing of time. Jim Woodlock too featured in that production while Matthew Bourke was one of the central characters - his wife Anne, Set Designer extraordinaire, featured on stage this time round in Matthew's memory bringing a lovely touch to the production.
Speaking of the set - wow. What a fantastic job the crew did with this fabulous picture which caught the eye the moment you entered the auditorium. It's just a pity that the wider drama family throughout the country won't get to see it this year.
Dress plays a huge part in the visual attractiveness of any production and Thurles' wardrobe crew got it absolutely spot on for Juno and the Paycock. From the get-up of Hugh Ryan as 'the mickey dazzler' Charles Bentham to the glamour of Kate Lineen as Mary Boyle, to the shabbiness of Liam Ryan as Joxer, or even Captains Boyles socks - they did a wonderful job.
John Coughlan, new to Thurles Drama Group, and Elizabeth Kirwin were brilliantly cast for their roles while John O'Sullivan, Denis Slattery and Ronan Duffy were equally as effective in their respective parts.
It's entirely fair to say that Juno and the Paycock was an outstanding success for Thurles Drama Group - not just in an attendance sense, which is very important too. It was a theatrical joy and for anyone who loves the theatre and loves going out to be entertained and emersed in the story of the production, Juno did the trick. You cannot underestimate the value of seeing your local teacher, architect, civil servant, shop keeper, housewife, guard, undertaker or pharmacist, taking on a role and making it their own - that's what Thurles Drama Group has been doing for the last fifty years. Here's to fifty more.
Juno and the Paycock was a golden production for a golden celebration. Take a bow Margaret McCormack and everyone involved.
Superb.