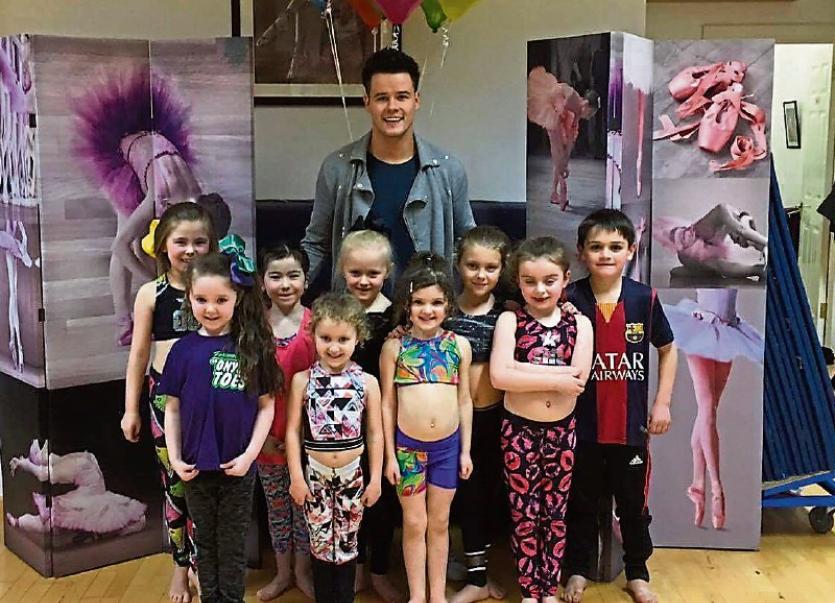 Dayl Cronin with young dancers at the On Your Toes dance academy in Clonmel. Dayl has been one of the big success stories of RTE's Dancing with the Stars show.

A Clonmel mother has spoken of her pride in her son who has captured the imagination of the country.

Dayl Cronin from Clerihan is one of the last dancers standing in RTE's Dancing with the Stars show, and will continue his quest to be crowned champion in the next round on Sunday evening.

"I'm so proud of him", says Angie Cronin.

"It's amazing that people around the country have voted for him in such large numbers.

I cannot thank them enough and I hope they'll continue to support him".

She says that Dayl is really enjoying his time on the show.

"He's delighted with all the votes he has received so far and is grateful for all the votes that have taken him to this stage of the competition.

He's hoping that people will continue to vote to give him one last push to get him over the line".

The show, which started on January 8th, is screened at 6.30 on Sunday evenings and ends on Sunday fortnight, March 26th.

There is a twist to this weekend’s show with the addition of the Ballroom Blitz Marathon. In this special dance battle all five celebrities and their partners will take to the floor for a three-minute jive and will then be eliminated one by one by the judges in a bid to be last the couple standing.

The couples will receive points in descending order, which will be added to their score from the main show.

With several celebrities already eliminated Dayl is the only dancer so far in the series to score a perfect 30 points.

He was in the third year of his course at the Leicester College of Performing Arts in England, where he studied singing, dancing and acting, when he successfully auditioned for Louis Walsh's boyband HomeTown.