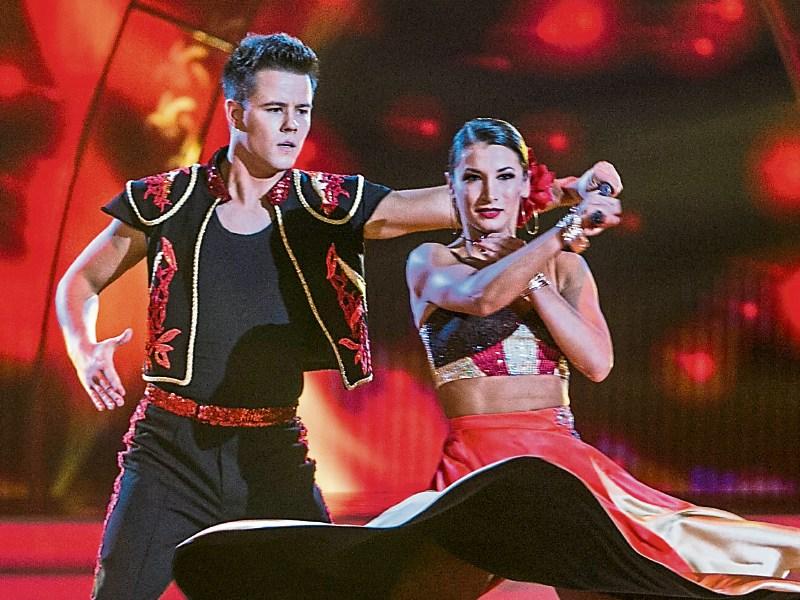 Dayl Cronin and his professional dance partner Ksenia Zsikhotska strut their stuff on Dancing with the Stars. They have qualified for Sunday's semi-final, which will be shown from 6.30pm on RTE One.

A young Clonmel man who has captured the country's imagination has his sights set on reaching the final of RTE's Dancing with the Stars show.

Dayl Cronin from Clerihan is through to Sunday's semi-final and hopes to go all the way to the final on the following Sunday, March 26th.

He says it was a relief to qualify from last weekend's latest round without having to compete in the dreaded dance-off, where he found himself the previous week.

"Thank God I wasn't involved in the dance-off, I never want to be there again", says 23 year-old Dayl.

"It was the worst feeling ever to be in the bottom two, knowing you could go home. It was also horrible to have knocked someone else out. I was happy to get through but gutted at the same time".

Dayl and his professional dance partner Ksenia Zsikhotska achieved 27 marks out of 30 from the judges when they danced to the song 'Bamboleo' and he was pleased with the performance.

"I was happy because I had struggled with the dance all week. It was very tough and I didn't enjoy it as much as the other dances, so I was delighted with the reaction".

As the business end of the competition approaches Dayl is now up against actresses Denise McCormack and Aoibhin Garrihy and former Kerry footballer Aidan O'Mahony.

"I'm seriously loving the competition and would love to go all the way to the final", he says.

"To get this far has been amazing and the support from everyone has been incredible. I'm beyond grateful to everyone who has voted for me, a massive thanks to them all. I hope they'll keep voting for me".

Dayl has had another busy week of rehearsals before Sunday's semi-final, which will be shown on RTE One from 6.30pm.

He was in the third year of his course at the Leicester College of Performing Arts, where he studied singing, dancing and acting, when he successfully auditioned for Louis Walsh's boyband HomeTown.