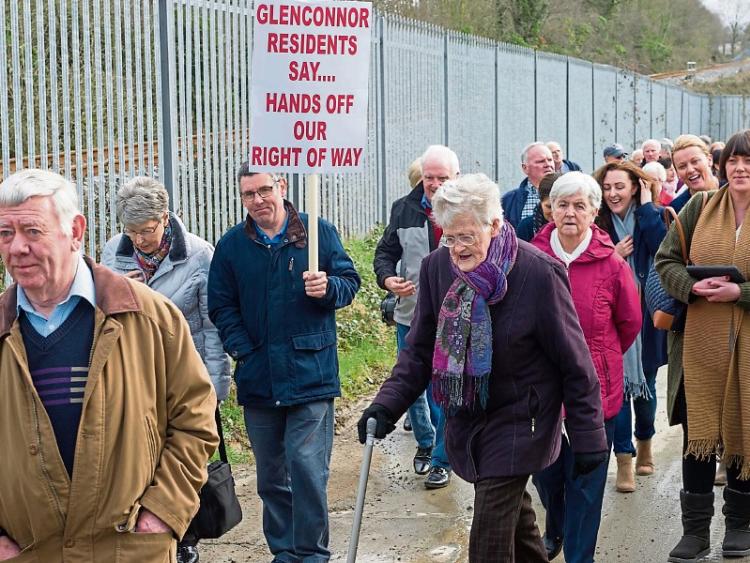 Residents in Glenconnor, Clonmel turned out in force to highlight the closure of the right of way that they have used all their lives.

Tipperary County Council has issued a warning letter regarding the alleged unauthorised blocking of a right of way at Ardgeeha, Glenconnor, Clonmel.

A council spokesperson told The Nationalist that this letter was issued on January 3rd following a site inspection, after it received a complaint regarding the blocking of a right of way at this location on December 5th last.

The council said its planning authority was currently considering this matter in accordance with Section 153 (Decision on Enforcement) of the Planning and Development Act 2000.

Residents in the Glenconnor area are concerned that the right of way, which has been in use for the past 92 years, will be closed permanently.

The right of way that connects houses on both sides of Glenconnor was closed last November to facilitate the construction of a house in the area.

Now residents are worried that it won't re-open.

"There has been an established right of way there since 1925 and which was in use until November", says residents' spokesperson Jimmy Moloney.

"The residents have no objection to a house being built but we want the right of way maintained to preserve the link between both Glenconnors".

Forty people living on both sides of Glenconnor gathered in the area recently to highlight the closure of the right of way, which they understood would be for twelve months but which they fear will be permanent.

They included a former resident, 89 year-old Phyllis O'Mahony, whose family moved to Glenconnor in 1928 when she was one year-old. As a child in the 1930s Mrs. O'Mahony, who now lives in Ard Fatima, used the right of way to walk to the two shops that were in the area and visit friends and neighbours.

Her nephew Willie Hogan now lives in the family home in Glenconnor.

Almost forty letters were submitted by residents stating that the right of way was in use until its closure four months ago. People from other areas of town have also voiced their support for keeping the access route open.

Residents are also planning to hold a public meeting on a date to be decided.

On October 12th last the County Council granted permission to Michael Flannery for a change of house type to that permitted under planning application reference number 14550024, and planning permission to construct a domestic garage and all associated site works.

The land is owned by Daniel Casey.

Jimmy Moloney said that he maintained the right of way for many years, cutting the grass and hedges and keeping the area litter-free.

He said that since it opened in September 1982 St. Oliver's national school in nearby Heywood Road, which now has 350 pupils, had used the right of way for nature walks.

Mr. Moloney said that 45 houses were built in the area in the 1920s for former servicemen of the British army.

The right of way was established from the time the houses were built, connecting the area at Rockfield, Glenconnor, near St. Oliver's Church, and the houses on the opposite side at the Glenconnor Road, past Gortmalogue and on the way to Clonmel Garden Centre.

It was known down the years as The Playground, where children played during the 1920s and 1930s, and The Hilly Field.

There was regular pedestrian traffic through the area to the two shops (which have since closed) and the water pump at Rockfield.

It has also served as a popular walking route for people from other areas of the town.