Local rallied to prevent youth from snatching the revived animal 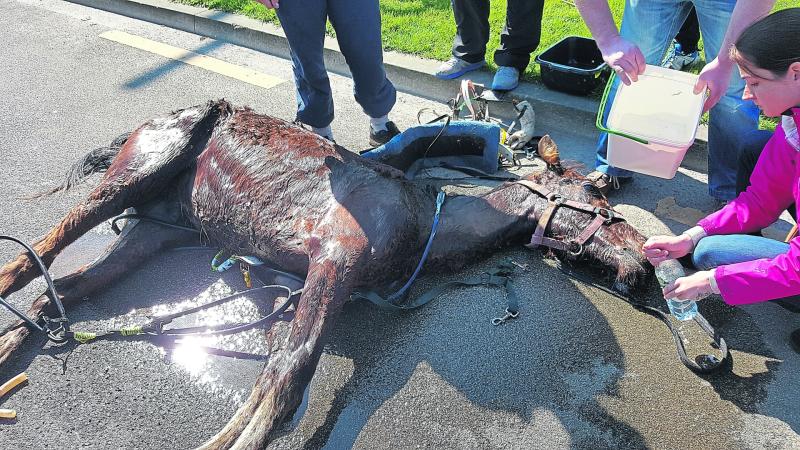 The pony being tended to after collapsing

There is seething anger this week in Cashel town following the collapse of a one and half year old pony who was literally driven into the ground by a sulky racer.

This horrible story of abuse of animals has caused major upset in the historic town and the fact that it occurred in broad daylight on a busy afternoon with tourists passing by, en-route to the Rock of Cashel, has only exacerbated the sense of anger.

The one and a half year old pony, was treated on the side of the road by a local vet who was called to the scene by irate passers-by and was later taken away by officials of the ISPCA. The pony is said to be doing well at this time, but will never be returned to its owner, who attempted to retrive the animal at the scene.

Three Garda vehicles attended as exchanges became hostile and threatened to spill over. Thankfully, they did not. There were four sulkies involved at the time with the other three fleeing also when the pony collapsed.

“You have no idea of the level of anger amongst members of the general public who were at the scene when this happened. You are not permitted to put a cart or sulky on any pony until they are three years old and yet here we had blatant disrespect for the law and for the animal.

The straps were cutting into the animals side - the two hind legs were red raw from them and the poor misfortunate animal collapsed with exhaustion having been literally driven into the ground,” one passer-by told The Tipperary Star this week.

The distressing scene, close to Tesco in Cashel, has been the talk of the area and now a call has been made to have the ISPCA come to the town and visit various locations where horses, ponies and dogs of all breeds are allegedly being held without passports, microchips and in many cases vaccinations.

Councillor David Doran has been one of the main movers behind the banning of sulky racing in Tipperary. He said, “This only reinforces the argument to ban sulkies on public roads. It is barbaric and as a local authority, we should not have any hand, act or part in it. I am even more resolute in my intentions to get it banned than I ever was. I was horrified when I heard what had occurred in Cashel and I would urge people to make contact with the Gardai if they have any information,” Cllr Doran said.