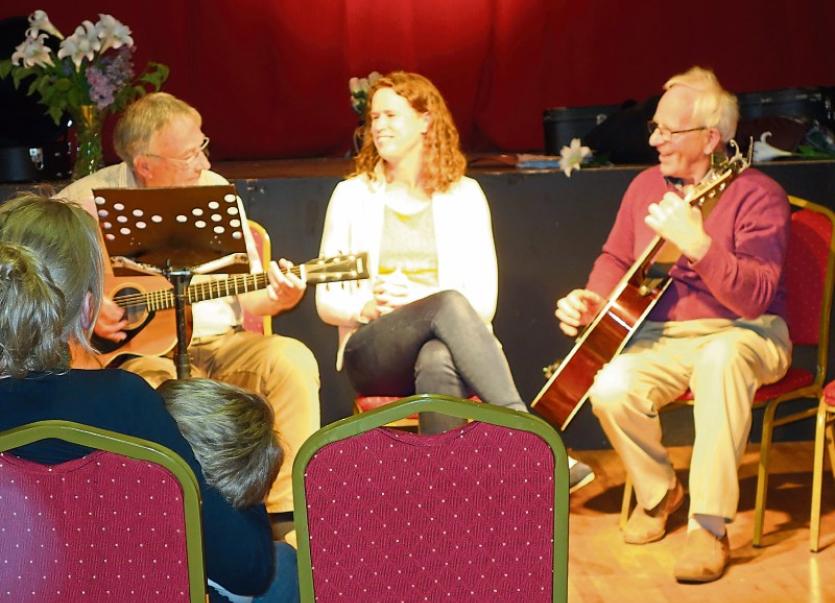 Cloughjordan honoured Thomas and Muriel MacDonagh throughout the May Bank Holiday Weekend with a programme of art, music, family stories, talks and outings celebrating the progression of the status of women in Ireland from the early 1900s to the present.

The festivities, launched by Paul Leech, began with artist Suzanne Walsh, who presented her art installation of poetic text and audio effects. This work will continue on display in the Thomas MacDonagh Museum for a further week.

The four speakers for the Summer School were enthusiastically received. Mary McAuliffe spoke of the experiences of Cumann na mBan members and others as they continued, after 1916, to work for their ideals in a changing society. The story of the Gifford family of 12 children was recounted by Lucille Redmond, granddaughter of Muriel Gifford MacDonagh. The reality of life for workers from the Dublin tenements was presented by Máirín Johnston who took part in the 77 Women Quilt project, now displayed in Richmond Barracks.

There was a visit to Grawn Graveyard, where Muriel McAuley placed a lily on the grave of her great-grandparents, Joseph and Mary Louise MacDonagh. Tom Doheny met the group in Kilruane and recounted the details of the death of Jim Devaney there, in 1921.

Bawney Hayes, with an impressive group of talented friends, presented an exceptional evening’s entertainment in the Parochial Hall. Sunday afternoon brought capacity attendance to the illustrated talk given by Dr. Caoilfhionn Ní Bheacháin and Dr Angus Mitchell on the extraordinarily creative artistic period of the Gaelic Revival, during which MacDonagh found expression through poetry, drama and music.

Beginning with the activities of her grandparents, Hanna and Francis, Michelene Sheehy Skeffington brought her audience through the activities of the Irish feminist movements up to her present protest against the academic institutions in failing to appoint women to senior positions. She was and congratulated in continuing in Hanna’s footsteps.

Celebrating the ancient feast of Bealtaine in Knocknacree Wood on May Day, a large group gathered in a spirit of thanksgiving for a new season, which arrived with glorious sunshine. MacDonagh’s poem May Day was recited and Knocknacree was read by Michelle Drysdale. Shay Hannon and Wendy Bailey provided music and Suzanne Walsh sang The Bittern. With fire, water and willow saplings Mary Meighan recreated the ancient Celtic healing and blessings of Bealtaine. The afternoon performance of the Ukelele Band in the Middle Country Cafe had the packed house singing and bopping. The music continued at an Oíche Ghaelach in Grace’s Pub.

The Cloughjordan Heritage Group wish to thank Tipperary County Council, all who contributed to the programme and especially those who helped, in so many ways, to make the 2017 Thomas MacDonagh Weekend such a great success.