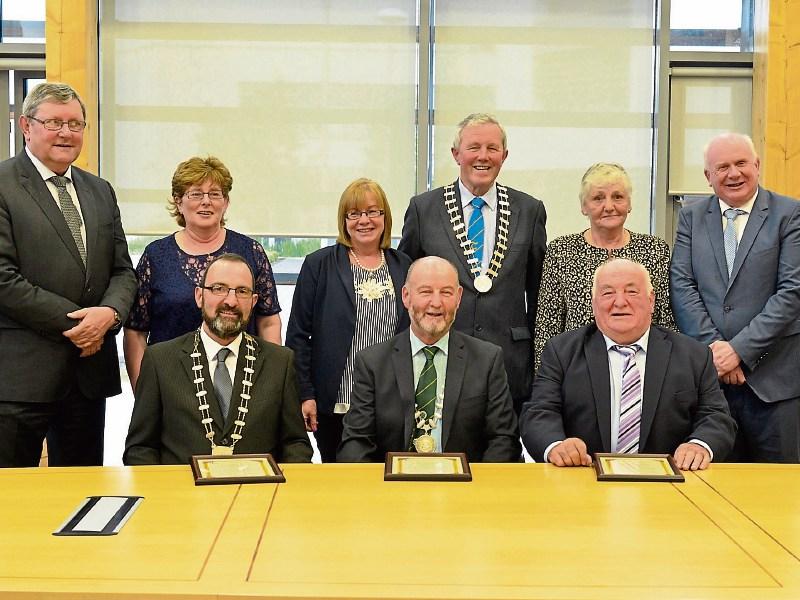 Above: Michael Sweeney, Gerard Ryan and William Barry and their wives Nora Sweeney,Mary Ryan and Una Barry at the civic offices in Tipperary town with Cllr.Michael Fitzgerald,Chairman Cllr.Roger Kennedy and Deputy Jackie Cahill.

Three men were accorded a civic reception by Tipperary/Cashel Municipal District Council in appreciation of their contribution to rural life in Ireland.

The motion to accord the civic reception to the three recipients was proposed by Chairman Cllr.Roger Kennedy and seconded by Cllr.Michael Fitzgerald.

The meeting was attended by the wives of the recipients, family members and friends.

Chairman Cllr.Roger Kennedy said if rural Ireland was to survive leaders like the three recipients were needed.He said all three had shown drive and committment for the cause of rural Ireland.

Cllr.Michael Fitzgerald said the civic reception was the highest honour they could bestow on any individual and it was fitting that such an honour be awarded to three men who had done so much for people living in their communities of Kilross,Dundrum and Cappawhite.

Michael Sweeney,thanked the members, and said he grew up with a great sense of community in rural Doolan at a time when people brought in the hay together and went to the bog together.The ability of rural people to help out in their own communities wa so important he said.

The Muintir na Tire leader said it was important that rural Ireland , at a time when it was under threat ,had to be enabled to survive.

Gerard Ryan said he arrived in Dundrum forty years ago and it was natural for him to immerse himself in the life of the community through the his work as a guard, through the GAA and through the scouting movement.

The development of a derelict building to an international scout centre,was a fantastic example of the tremendous work achieved by the local community.

William Barry thanked the members of the council for according him the civic honour.He said he was delighted to receive the award.