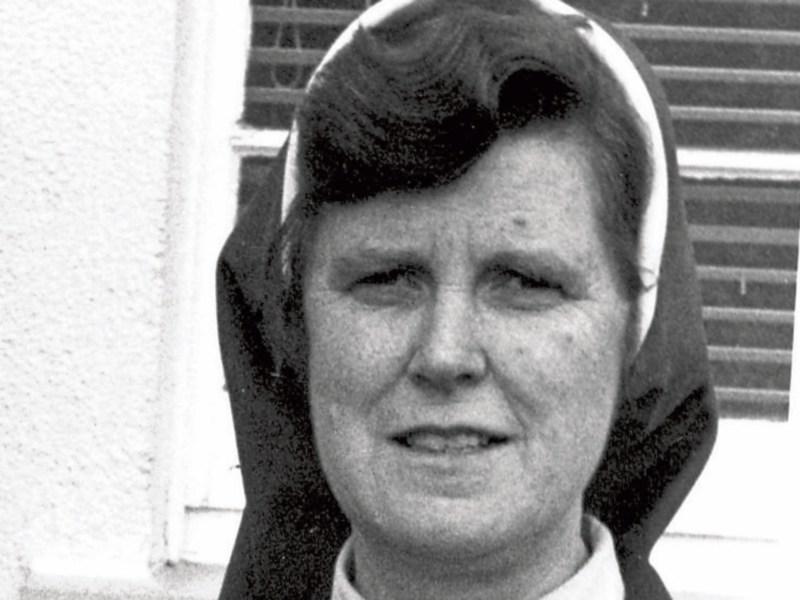 Nenagh has lost one its greatest champions for those in need with the passing of Sr Breda Quigley.

A former matron at Nenagh Hospital, Sr Breda is remembered for going on to provide so much more to this community, especially the Áras Mhuire Day Care Centre and housing for those who could not afford to put a roof over their heads.

She was born on March 4, 1933, the fourth child in a family of 12. Her parents, Timothy and Winifred Quigley of Ballywilliam, sent her to the local primary school, after which she enrolled at St Mary's Secondary School in Nenagh.

Entering the Sisters of Mercy in Nenagh at the age of 17, Sr Breda was professed on August 5, 1957 and given the name Bernard. She trained as a nurse at the Mater Hospital in Dublin and as a midwife at Our Lady of Lourdes Hospital in Drogheda. She then ministered at Nenagh Hospital, becoming matron in 1961.

Known for her compassionate, caring character, Sr Breda treated all of her staff and patients with great kindness and impartiality. She saw her role and ministry as facilitating the healing of the sick and comforting those who were on the last furlong of life's journey.

She demonstrated great organisational skills and an ability to see the potential of things long into the future. Confident that the hospital was in safe hands, she gave up her role to set up home help with Nenagh Social Services at Loreto House in 1975. A forerunner to North Tipperary Community Services, Sr Breda poured her creative energies into the initiative. This included providing education and additional supports to lone parents.

Sr Breda was acutely aware of the need for a voluntary housing project in Nenagh. Her colleague and friend Sr Patricia Greene, who said one “could write a book” on the many achievements made by Sr Breda, recalled how a fundraising committee was formed and received a grant from the Dept of Enterprise.

Spearheaded by Sr Breda, the initiative resulted in the purchase of several houses in the town as well as the provision of the Arra Drive housing development (the committee later went on to establish the nearby Castle Crescent development).

Around the same time, Sr Breda was working on the foundation of Áras Mhuire Day Care Centre. She again identified the need for such a service, and is credited with setting up the Ashe Road centre in 1987 and overseeing its considerable extension in 1995. Sr Breda also managed the centre for many years.

A Mass in memory of Sr Breda was held at the centre, celebrated by Fr Joe Kennedy, who once worked closely with Sr Breda.

Manager Anne Healy described Sr Breda as resourceful and farseeing. She never seemed to worry about money and was always able to find a way of funding the services needed.

Sr Breda was all the while dedicated to supporting the underprivileged she encountered in the community, wherever they came from.

Another companion, Sr Maureen Frawley, recalled the lengths she went to help people, sourcing food, clothing and even beds and for those in need. She worked closely with the local authority on the provision of housing and the maintenance and repair of dwellings.

She had no interest in taking holidays or attaining material possessions for herself. She gave away everything she had, and she never looked for any praise or recognition for the countless people she helped, preferring instead to work away quietly in the background, self-effacing to the end.

Leaving Áras Mhuire in capable hands in 2004, Sr Breda's final mission brought her to Pretoria in South Africa. She was asked to help with the elderly and AIDS patients in the village of Mmakau.

It was intended that Sr Breda would spend a year in South Africa but she remained there for five years. During that time she set up an orphanage for children whose parents had died from AIDS. The orphanage has capacity for 35 children, and Sr Breda saw its development through to the finish, ensuring that it was sufficiently resourced with suitably trained staff.

Availing of the generosity of her community at home in Nenagh, Sr Breda also oversaw the repair and rebuilding of many homes in this remote and impoverished part the outside world.

Sadly, her health began to fail and in 2014 Sr Breda went to live at Catherine McAuley House in Limerick. She settled in happily and was a prayerful presence there, nursed with great care up until her death on May 14th last.

Predeceased by her sisters Sr Philomena, Mary Walsh, Nancy Byrne and her brother Ned, Sr Breda is sadly missed by the communities in Catherine McAuley House and St Mary's Convent in Nenagh, and the wider Mercy community. She is also deeply missed by her sisters Sr Christine, Sr Margaret and Tess Holland, and by her brothers John, Patrick, Tim and Jim, and extended family.

St Breda was buried at the Convent Cemetery in Nenagh